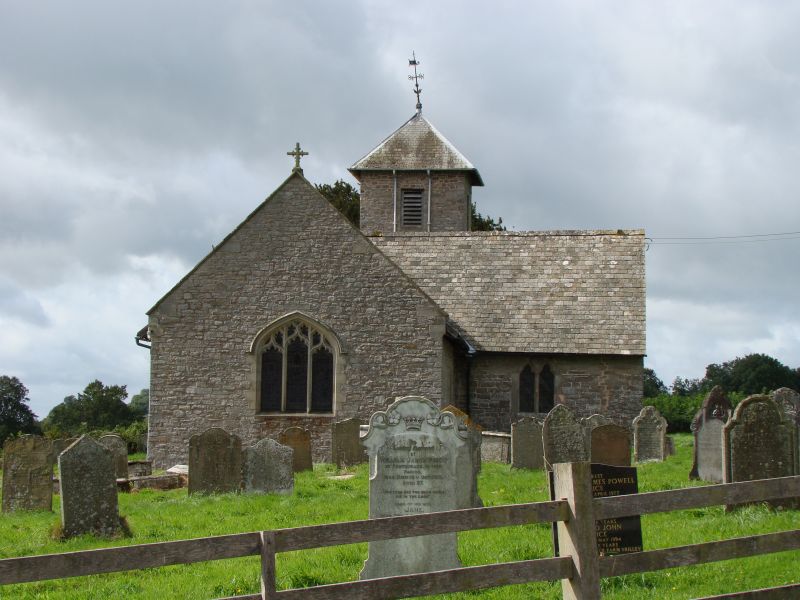 Parish church. C12 origins. Rebuilt circa 1300, restored in 1862 and 1890.
West tower rebuilt in 1912. Coursed sandstone rubble with ashlar dressings;
slate roof with decorative ridge tiles, gable-end parapets and a cross finial
at the east end. West tower, continuous four-bay nave with north transept
and south porch, and single-bay chancel. West tower: destroyed by fire in
1912 and rebuilt. Two stages with plinth and intermediate strings. Lower
stage has a lancet in the south and west elevations and a pointed chamfered
south doorway. The belfry stage has square louvred bell chamber openings
beneath round relieving arches and there is a clockface on the south side.
Above is a pyramidal roof with overhanging eaves, a finial and a weathervane.
Nave: circa 1300, extended to the west in 1912. North elevation has two pairs
of C19 cusped lancets. South elevation has buttresses with offsets flanking
the easternmost bay. There are three pairs of C19 cusped lancets, the remains
of a wall memorial at the eastern end and a brick chimney east of the western-
most bay. The north transept has a pair of original cusped lancets at the north
end and in the east side elevation. South porch: rebuilt in 1865 incorporating
much of the C15 woodwork. Gabled and timber-framed on a rubble plinth with
ashlar coping. It has large wall-posts, broad cambered tie-beams with moulded
arch-braces forming pointed inner and outer archways and an intermediate moulded
truss. Side elevations have two rows of four panels, the lower panels are
boarded and the upper panels have glazed cusped pointed openings. The south
doorway has a C19 chamfered pointed arch. Chancel: rebuilt in 1890. It has
a 3-light east window with a hoodmould and returns, a circa 1300 reused cusped
lancet in the north side, and in the south elevation is a C14 square-headed
window of two ogee-arched lights and a C19 chamfered pointed doorway. Attached
to the south elevation is an early C19 wall memorial to the Bromage family by
R Davis.

INTERIOR: there is a C14 recess with double hollow chamfered jambs
in the south wall of the transept which probably once led to, the rood loft
stairs. Nave has a C14 ashlared arch-braced collar truss roof with cusped
struts, collars and principals and two subsidiary tie-beams. The transept
roof is of similar age and type with king-post trusses against the end walls.
The chancel has C15 hollow-chamfered wall-plates. At the west end is a
chamfered arch-braced truss with a brattished tie-beam, cusped detail, quatre-
foil tracery in the spandrels and moulded responds. East of this truss the
roof is ceiled. There is a traceried, arcaded chancel screen. The stone font
is C12 and has a tapering cylindrical bowl with a chamfered base. The five-
sided timber pulpit is C19. There is a mid-C18 altar table with turned legs
in the transept. Memorials: at the west end of the nave are two C17 cast iron
floor slabs set against the wall to Guilbert Hare, died 1669, with a coat of
arms and moulded border, and to Margaret Hare, died 1669, also with a moulded
border. There is also an early C19 memorial to John Harris, various floor
slabs of mainly C18 and C19 date but including a C17 one to James Parry and
John Goode, and, at the east end of the church, an C18 cartouche to James
Bromage, died 1723. In the north transept is a late C18 memorial to Walter
Harris, died 1791. Glass: C19 glass in chancel and a north nave window; one
of the chancel windows is by Barnett of Newcastle. (RCHM, III, p 23, item 1;
BoE, p 86).