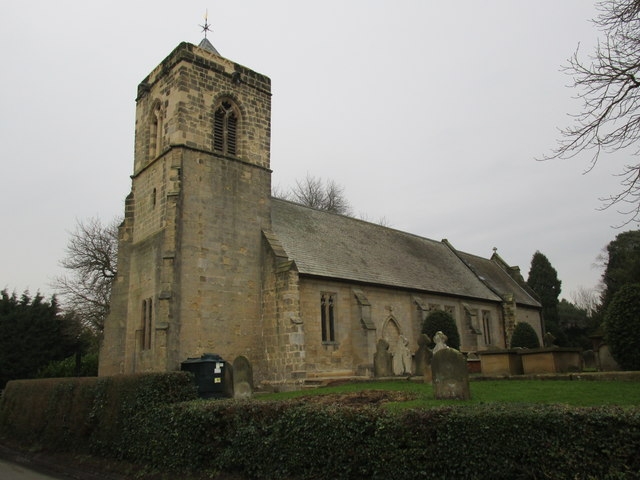 Church. C12 origins, nave and chancel rebuilt 1889 by Temple Moore, C15
west tower. 2 bay chancel, 4-bay nave with north porch, west tower. Latter
of 2 stages with chamfered plinth, diagonal buttresses, and hollow-chamfered
string at belfry level. West window of 2 pointed lights. 2-light belfry
openings with Curvilinear tracery, corbel table, with masks, to parapet.
Pyramidal roof with weathercock. Nave: chamfered plinth and buttresses with
offsets. 2-light windows with cusped tracery. Blocked south door to nave
with attached shafts and pointed head with keel moulding and ball ornament.
Raised coped gable. Chancel has round-headed south door with continuous
chamfer and east window of 3 lights with elaborate Curvilinear tracery
flanked by buttresses. Raised coped gable with cross finial. Interior: C12
tower arch, apparently inserted into an older structure, with 3 human faces
carved onto each impost. The nave contains a 9-sided tub font and an early
C18 pulpit. In the north of the chancel is a C19 plaque commemorating the
burial there of King Alfred of Northumbria in AD 705. On the opposite wall
is a plaque recording the death of Lora, Viscountess Downe (d 1812) the
inscription on which refers the reader to the Gentleman's Magazine for
May 1812 for a more full description of her 'character and other
particulars'. large number of sculptured fragments have been incorporated
into the exterior fabric of the nave including a pre-Conquest interlace
slab.