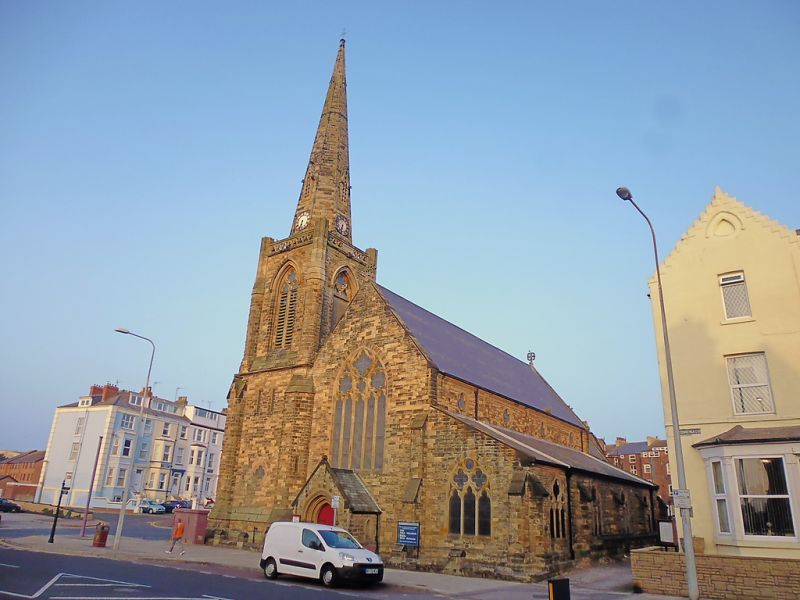 EXTERIOR: Holy Trinity church is built in the Early English style of the late-13th century. The body of the church consists of a four-bay, clerestoried nave with lean-to aisles abutting it. The aisles have a series of three-light Geometrical windows. At the W end below the five-light W window is a gabled porch. The clerestory windows are quatrefoils punched through the wall of the nave. At the NW corner stands the steeple the tower of which is of two stages culminating in an openwork parapet. The lower stage has a N doorway set underneath a gable. The second stage, of similar height to the stage below, has tall two-light belfry windows. The tower is crowned by a recessed spire with ribs at the angles and a tier of tall spire lights. The chancel is lower than the nave and has a four-light E Geometrical window with a series of trefoils and quatrefoils in the tracery.

INTERIOR: The interior is plastered, whitened and is quite plain with little decoration. The arcades have moulded arches and octagonal piers and moulded capitals. Between the nave and chancel is a moulded arch springing from colonettes which in turn stand on corbels: the capitals of these shafts have elaborate stiff-leaf foliage capitals. The nave and chancel roofs are also supported on colonettes with stiff-leaf foliage.

PRINCIPAL FIXTURES: Many of the Victorian furnishings remain in place. The nave seats have the conventional square-headed ends to which are attached umbrella holders. The organ is a large, imposing instrument on the N side of the chancel with three semi-circular towers of pipes and traceried screening at the top. There is a good series of cast-iron radiators by Wright Bros of Sheffield, one with flowered panels. There is quite extensive stained glass: the E window, representing the Resurrection, is of 1913 and this and three chancel S windows of 1917 and 1921 are by H W Bryans. The S aisle E window is of 1875 and is by Hardman while another in the S aisle (date of death 1921) is by Hardman and Co. A further S aisle window (date of death 1917) is by Heaton, Butler and Bayne.

HISTORY: Holy Trinity church was built in 1870-1 by subscription but much of the money came from the Rev. Y G Lloyd-Graeme of Sewerby House who also presented the church with a peal of three bells. The total cost was £7,000 and the church could accommodate 900 people (all the sittings were free). It became the centre of a separate parish in 1874. The architects are not well known: Frederick Stead Brodrick (1847-1927) was the nephew of the famous architect, Cuthbert Brodrick, the designer of Leeds Town Hall. He went into partnership with the surveyor to Hull Council, R G Smith (fl 1870-82) who became FRIBA in 1871.

REASONS FOR DESIGNATION:
Holy Trinity church, Bridlington, is designated at Grade II for the following principal reasons:
* It is of special interest as a medium-sized mid-Victorian town church built in a late 13th-century style.
* It retains much of its Victorian furnishing scheme and has a number of stained glass windows of interest.