A Grade I Listed Building in Sledmere, East Riding of Yorkshire 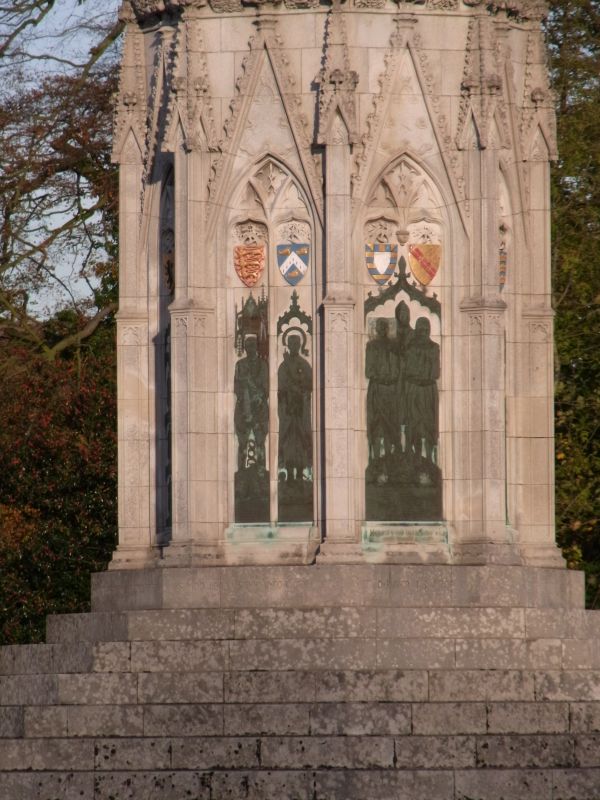 Village cross/First World War memorial. Erected in 1896-8 to the designs of Temple Moore, built by Thompsons of Peterborough, with Mr G Mills being the foreman of the masons and John Barker of Kennington undertaking the ornamental carving. Converted to a war memorial in 1918, designed by Sir Mark Sykes, with effigies manufactured and engraved by Gowthorpe and Sons, memorial brass engravers of London.

Village cross/First World War memorial. Erected in 1896-8 to the designs of Temple Moore, built by Thompsons of Peterborough, with Mr G Mills being the foreman of the masons and John Barker of Kennington undertaking the ornamental carving.
Converted to a war memorial in 1918, designed by Sir Mark Sykes, with effigies manufactured and engraved by Gowthorpe and Sons, memorial brass engravers of London.

The Eleanor Cross is situated on the western side of Sledmere village, adjacent to the site of the former church pond, 45m south-west of the gateway to the Church of St Mary. It has an octagonal-plan with a base of eight steps, it comprises four stages and is a near copy of the Northampton (Hardingstone) Eleanor Cross of 1291.

The first stage has a moulded base and rises from a plain plinth inscribed with the words of the Lord’s Prayer. It comprises an arcade of eight paired blind tracery panels with ogee transoms and blind hoods beneath an engaged crocheted canopy, separated by perpendicular-style staged square pillars with pinnacles. Sixteen carved and painted stone heraldic shields hung from oak branches are situated beneath the ogee transoms, one to each panel. The heraldry represents England, the Borough of Kingston upon Hull, the Borough of Beverley, the Holy Trinity, the See of York, Archbishop Maclagan, a Gallic Cock, and the family crests of the Sykes, Harcourt, Mortimer, Woodcock, Robson, Matthew, and one that remains uncertain representing either that of Belgrave, Watton, or Banister. The heraldry relates to the individual brass effigies in the panels below, although not all of the individuals were entitled to display them.

The panels below contain twenty-two brass effigies to commemorate the fallen officers and men of the 5th Battalion Yorkshire Regiment; one commemorates a soldier of the 1st Battalion Cheshire Regiment, another from the Princess Patricia’s Canadian Light Infantry, and one depicts Lieutenant-Colonel Sir Mark Sykes. Not all of the effigies are to the same scale - one panel shows six officers in pairs in three superimposed rows, one shows three soldiers, while another panel has two full-length figures, with another figure standing centrally to the rear. A number of the panels depicting officers are shown in knightly attire or have chivalric references including gothic canopies, scrolls, a supporting angel, St George slaying the dragon, and an image and quote of Joan of Arc. The effigy depicting Lieutenant-Colonel James Thomson shows him standing on the chained and prostrate figure of Wotan, while the effigy of Captain Edward Bagshaw is an adaption of the brass of Sir Robert de Septvans at the Church of St Mary, Chartham, Kent. The effigies were originally gilded, but only faint traces remain. The details illustrating awards and stained glass has been coloured and traces of paint can be found on a number of the effigies. The non-commissioned officers (NCOs) and soldiers are shown in the manner of crusader poses, with hands in prayer. All of the effigies are shown wearing contemporary British army uniforms and equipment of the First World War; however, some of the NCOs and soldiers are shown wearing a mixture of contemporary medieval equipment, including mail mitts and coifs. Most of the soldier's effigies stand on headstones with a tool of their trade beneath their feet, including a footman's salver, a bill-hook, and a carpenter's plane. The additional brass effigy of Lieutenant-Colonel Sir Mark Sykes shows him depicted as a knight carrying a shield bearing the Sykes arms, beneath a scroll bearing the words LAETARE JERUSALEM, standing over a paynim with the Holy City in the background.

The Sykes family were originally merchants from the West Riding of Yorkshire, they moved to Sledmere in the early C18, buying up large areas of land to create the Sledmere Estate, where they introduced new efficient farming methods and developed horse breeding stables. Sir Tatton Sykes, 5th Baronet, first engaged the well-respected architect Temple Moore in 1893 to design the addition of a north aisle to the church at Helperthorpe. Clearly having been satisfied with this work, Sir Tatton Sykes once more engaged the services of Temple Moor during the late-1890s to design the Church of St Mary and a village cross at Sledmere.

Temple Moore produced a design for the cross that was almost a direct copy of the Eleanor Cross at Hardingstone, Northamptonshire, which was built in 1291 for King Edward I, marking one of the resting places of Queen Eleanor’s cortège as it progressed on its way to Westminster Abbey. Although superficially very similar, Temple Moore’s design did differ in detail as the top tier of the cross at Hardingstone had been missing since before 1460; consequently the top tier at Sledmere, housing four statues of the Virgin Mary, surmounted by a crocheted pinnacle and a jewelled cross, was of Moore’s own design. Likewise the four statues of Queen Eleanor all differ in style and pose from those of the cross at Hardingstone. The cross was built by Thompsons of Peterborough, with Mr G Mills being the foreman of the masons and John Barker of Kennington undertaking the ornamental carving.

The Eleanor Cross acquired a new role during 1918, becoming a war memorial following the insertion of incised brass effigies into the blind panels of the first stage and the erection of a bejeweled bronze crucifix at the apex of the monument. The decision to convert the cross into a war memorial was taken by Lieutenant-Colonel Sir Mark Sykes 6th Baronet MP to commemorate his fellow officers of the 5th Battalion Yorkshire Regiment who had been killed during the First World War, together with men from the Sledmere Estate, a soldier from the 1st Battalion Cheshire Regiment, and another from the Princess Patricia’s Canadian Light Infantry, who were known to him. The epitaphs were written by and the designs of the individual figures commemorated were drawn by Sir Mark Sykes, in consultation with the relatives of the deceased. The designs were strongly influenced by Sir Mark Sykes' interest in the Gothic Revival, chivalry and the Crusades. Given the accuracy of depiction of the uniforms and equipment, it is strange to note that the muzzles of all rifles depicted are missing. The brass effigies were executed in a C15 style and were manufactured gilded and engraved by Gowthorpe and Sons, memorial brass engravers of London. The effigies were installed over a period of months in 1918, in seven of the eight blind panels of the Eleanor Cross, leaving one vacant. A succession of un-veilings occurred as the memorial brass effigies were added to the monument.

Sir Mark Sykes died of pneumonia on 16th February 1919, as a complication of having contracted Spanish flu, while attending the Paris Peace Conference. His presence at the conference was to act as the British expert on the Middle East, having been party to the drawing up of the Asia Minor Agreement of 1916 (Sykes–Picot Agreement) which determined the boundaries of countries and colonial spheres of influence in the post-war Middle East. In 1921 the tenants and villagers of the Sledmere Estate raised the funds for a further brass effigy depicting Sir Mark Sykes and it was installed in the remaining vacant blind panel of the Eleanor Cross. This effigy, and the last one of the effigies of the officers of the 5th Battalion Yorkshire Regiment, were unveiled at a dual unveiling ceremony on 3rd April 1921. A Guard of Honour was provided by the Driffield Company, 5th Battalion Green Howards, who lined the ropes surrounding the monument; inside the rope enclosure stood a further fifty veterans of the 5th Battalion Yorkshire Regiment, together with Lady Sykes and members of the Sykes family, Mrs J A Raymond Thomson, and other dignitaries. The effigy of Sir Mark Sykes was unveiled by the Reverend J Smith, Abbot of Ampleforth Abbey and that of Lt. Colonel Thomson by Colonel Commandant B G Price, DSO.

This war memorial of 1918, converted from a late C19 reproduction Eleanor Cross, should be upgraded from Grade II to Grade I for the following principal reasons:
* Architect: the very high quality of the original reproduction Eleanor Cross is unsurprising given its design by the well-respected C19 architect Temple Lushington Moore and its construction by the well-known monumental masons Thompsons of Peterborough;
* Design interest: the conversion of the Eleanor Cross to a war memorial by the addition of brass effigy likenesses of officers and soldiers was carried out to the highest standard and is sensitive to the original gothic style of the monument; it has produced a war memorial of exceptional interest;
* Quality of effigies: the design and execution of the effigies in a C15 style, the mixture of knightly attire and contemporary field uniforms, together with chivalric references, combine to produce a most unusual war memorial that reflects Lt. Col Mark Sykes’ interest in the Gothic Revival and chivalry;
* Historical interest: as an eloquent witness to the tragic impacts of world events on this community, and the sacrifices it made in the conflicts of the C20;
* Group value: the memorial stands in a prominent place within the wider context of Sledmere village and has a strong relationship with the adjacent Grade I, II* and II listed buildings, including the Wagoners’ Memorial, the Church of Saint Mary, and Sledmere House;
* Association: Lt. Col. Mark Sykes, 6th Baronet, MP is a significant figure as a British expert on the Middle East and party to drawing up the Sykes-Picot Agreement of 1916.