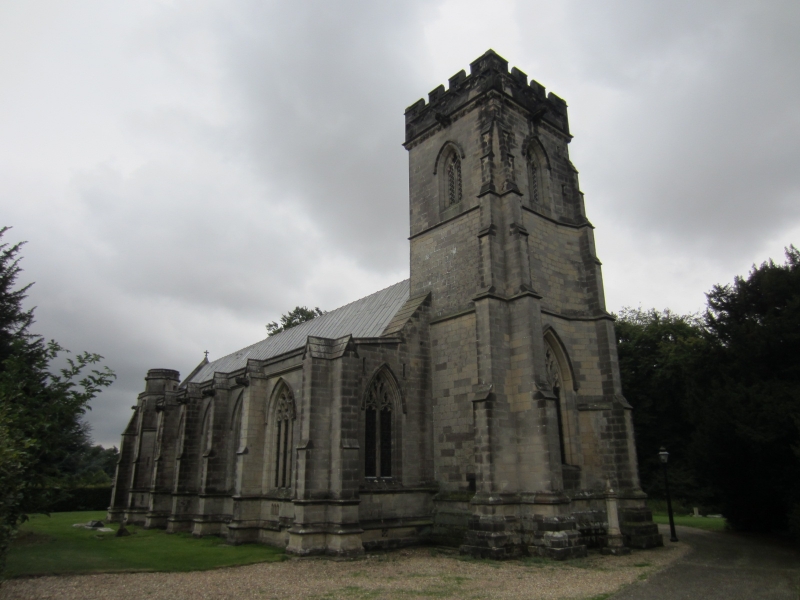 Church. 1898 with medieval origins to base of tower and with reused Norman
corbels built into roof of organ chamber. By Temple Moore for Sir Tatton
Sykes, 5th Baronet, and with carvings by John Thompson & Co. Sandstone
ashlar with lead roof. 3-stage west tower, 5-bay aisled nave with south
porch, 3-bay chancel with north vestry. Gothic Revival in the style of the
C14 with reticulated-type tracery throughout. Tower: stepped and chamfered
plinth. South-west stair turret. To west end are angle buttresses with
offsets almost to full height. West side has pointed 3-light window under
hoodmould. First- and second-stage bands. To third stage are pointed,
2-light belfry openings. Corbel table with central gargoyles. Battlements
pierced with crosses. Nave: stepped and chamfered plinth. Gableted angle
buttresses and buttresses between bays. South side. Porch to second bay
has angle buttresses with offsets. Pointed-arched opening under hoodmould.
Above are 3 crocketed ogee arches with statues of the Blessed Virgin Mary
between 2 saints, one holding a key and the other a casket. Corbel table.
Low decorative parapet. Within a pointed decoratively panelled door in
surround of 3 orders of nook-shafts supporting roll-moulding, under
hoodmould ornamented with fleurons. Elaborate tierceron-vault to roof.
Otherwise south and north aisles have 3-light pointed windows under
hoodmoulds. To east ends are octagonal stair turrets to corners, with blind
arcaded tops. Chancel: chamfered plinth. Buttresses with gargoyles between
bays, and at angles. 4-light, straight-headed windows throughout under
hoodmoulds, except to vestry which has 3-light pointed windows and 2- and
3-light straight-headed windows; entrance to vestry a pointed plank door
within moulded surround. Low parapet. Interior. Medieval triple-chamfered
pointed tower arch under hoodmould with label stops and with double-
chamfered sides. Nave has 4-bay triple-chamfered arcade on clustered piers
with moulded capitals and bases and with roll-moulding to head. Ornate
timber rood screen. Chancel is richly decorated with statues and has inner
tracery to the windows. Triple sedilia and piscina. Roofs: aisles are
vaulted with diagonally set ribs, nave and chancel have wagon roofs. Late
C19 octagonal font with elaborate carved cover. Monuments: 2 Neoclassical
marble wall monuments, black strigillated sarcophagi surmounted by white oil
lamps in south aisle to Elizabeth Egerton and to the Kirkby family erected
in 1795. In tower, to Sir Mark Masterman Sykes d 1823 by S Manning and
J Bacon, a mourning female figure and broken column; and to Henrietta
Masterman d 1813 by Rouw, a seated figure by a sarcophagus with an urn.
Stained glass mostly by H V Milner, but north aisle windows by Burtison and
Grylls. Pevsner N, Yorkshire, York and the North Riding, 1979, pp 343-4.