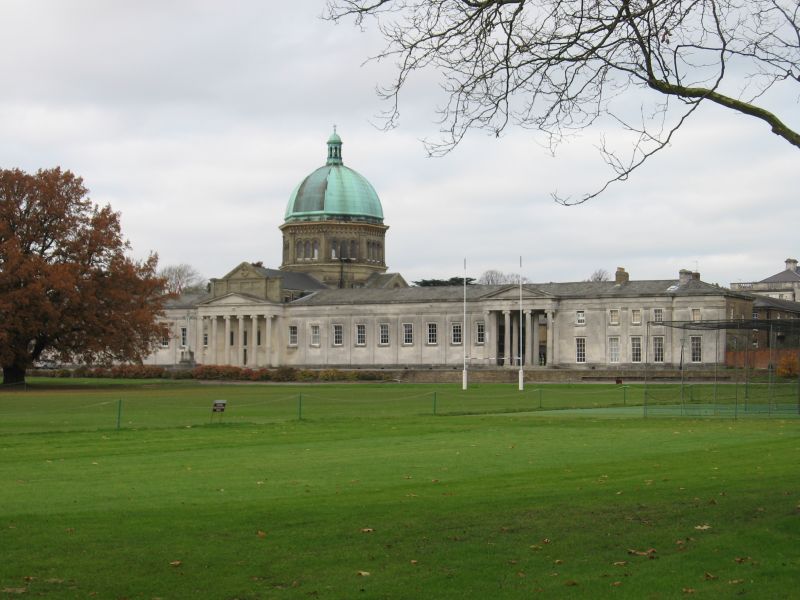 Public School. Designed by William Wilkins (1778-1839) in 1806 as
the East India College for the Honourable East India Company's
future civil servants (opened 1809: closed 1858: reopened as a
public school in 1862: amalgamated with the Imperial Service College
1942). Domed chapel 1876-7 by Arthur Blomfield, dome
rebuilt after a fire 1878: cloisters added 1885. Chapel interior
remodelled and apse added 1936 by Herbert Baker. Big School
(school hall) 1912-14 by J W Simpson and Maxwell Ayston.
Memorial Hall (dining Hall) 1930-32 by Herbert Baker and Oscar
Faber. The Wilkins buildings formed a symmetrical square campus
of 2-storeys in 'Ware white brick' with slate roofs, entered from
the W through a Greek Ionic distyle screen in Portland stone
between pilastered lodged in the middle of the W range. These
linked, formerly by lower buildings, to the Chaplain's and
Principal's houses to N and S. The N and E ranges contained 4
students' 'houses' separated by professors' residences. The
chapel, library, committee room and dining hall were grouped in
double height spaces in the S range linked by open Ionic porticos
(distyle in antis) to the Principal's house at the W, and the
kitchen block at the E end. The long perspective of the S front,
faced in Portland Stone, formed a picturesque composition with
the landscaping by Humphry Repton (1809). It is a symmetrical
5-part composition punctuated by prostyle Greek Ionic porticos,
hexastyle in the centre, marking the original library set at
right angles to the rest of the range, and tetrastyle fronting
the open porticos representing the screens passages of more
traditional college planning. The former chapel and hall have
regular pilasters and a tall Greek window in each bay with
architrave and converging jambs. The stone-faced-terminal blocks
are of 2 storeys each with a 3-window central bay breaking
forward. All but the chancel of the chapel became the present
library in 1880 when the old library became the nave of the
present chapel, by A Blomfield built in brick in the Quad in
Lombardic Romanesque style topped by an octagonal drum, dome and
cupola. Slates on dome replaced by copper 1927. Apse added by
Baker rising sheer from Quad and he inserted an inner dome, with
roundels in the pendentives by Charles Wheeler. The old dining
hall became the present Council Room after the Memorial Hall was
built by Baker in 1930-32 linked to the outside of the N range
but symmetrical about the main axis. This encloses a vast square
domed space engineered by Oscar Faber, oak panelling and stone.
Simple exterior in brick with stone dressings. Central in E
range and facing into the Quad, Big School by Simpson and Ayrton
1912-14 is an assembly hall with a Portland Stone facade of 2-
storeys and attic storey topped by a balustraded parapet. An
Ionic giant-order with full entablature and paived columns at the
ends decorates the W front. The interior of the hall has a
rusticated base and a procenium in the form of a triumphal
gateway. The clock and old cupola on the pedimented brick block
in the centre of the N side of the Quad are said to have been
moved forward when this bay was extended out. A striking
picturesque composition in the Neo-Classical idiom of 1806
showing a Greek Ionic interpretation of the medieval college
layout and by reason of its early date it constitutes a landmark
in the history of English taste, the springtime of the Greek
Revival (Crook (1964) 14): Axial additions and an unusual dome
have not compromised the neo-classical conception. Associated
with many distinguished professors, among them Rev. T R Malthus.
The building forms the centrepiece of an extensive group of
buildings of architectural interest, and is an important feature
in the sylvan landscape of the Heath. The chapel dome is a
landmark.