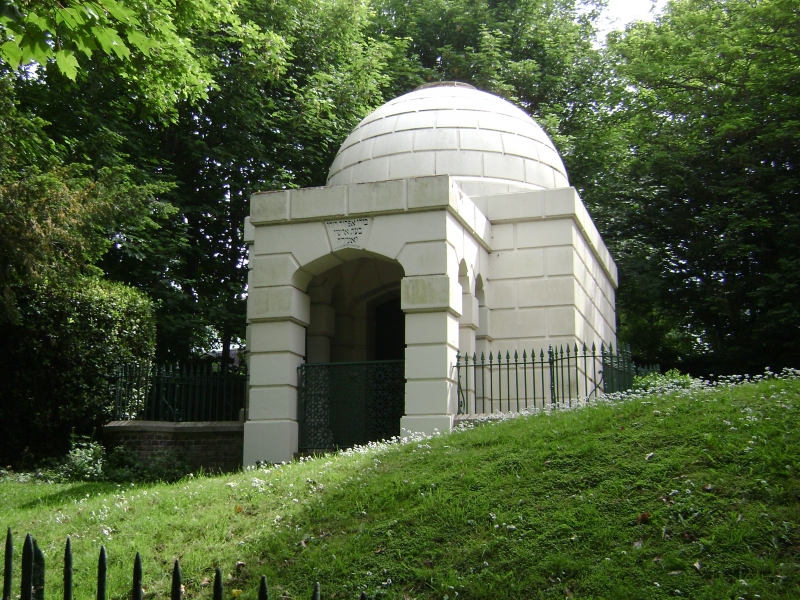 GV II*
Mausoleum of Sir Moses and Judith, Lady Montefiore. 1862, perhaps by David Mocatta. Painted stone. Domed rectangle with west-facing porch, the whole heavily rusticated (including the dome). Entrance porch with iron grilles to side arches, heavy impost blocks, ornamental cast-iron gates in main segmentally-headed entrance, with Hebrew inscription over doorway (from the Jewish prayer Adon Olam, 'Into His hands my spirit I consign'). Fine cast iron downpipes with anthemion enriched brackets and hoppers. The whole is surrounded by a low brick wall, with rounded corners and central sections, with spear headed railings and scrolled brackets. In the railed area, to the rear of the synagogue, is a pillar-like block of pink granite from the Holy Land.
INTERIOR: panelled interior door with fretwork iron grilles. Encaustic tiled floor throughout. Interior is top-lit, with coloured glass in a star pattern within the oculus; roll mould to the base of the dome; pendentives to the corners with depressed arches to the walls. In the centre of the chamber, two massive slabs of polished pink granite tombs, with Hebrew (and, for Sir Moses, English) inscriptions; they are set within fretted bronze screen surrounds. The suspended lamp has been missing for some time. Hebrew and English painted inscription panels hang on the walls.
HISTORY: This is an outstanding mausoleum, built to receive the remains of Judith (nee Cohen), wife of Sir Moses Montefiore (1784-1885), one of the key figures in the history of the assimilation of the Jewish community within English society. She died in 1862, and the tomb was based on the medieval shrine built over the tomb of Rachel, near Bethlehem, which had been visited by the Montefiores and restored at their expense. The column at the rear of the building was inspired by the original tomb of Rachel, the earliest monument referred to in the Old Testament. The result is a unique instance of a biblically inspired mausoleum: it has been described as 'an outstanding example of applied oriental historicism to Victorian architecture' (Rosenau). It possesses strong group value with the adjoining synagogue, and together they form a specifically Jewish enclave of a kind unique in Britain. The Montefiores lived close by, in the now-demolished house called Eastcliff Lodge; the theological college founded in her memory nearby has also been demolished.