A Grade II* Listed Building in Sutton-at-Hone and Hawley, Kent 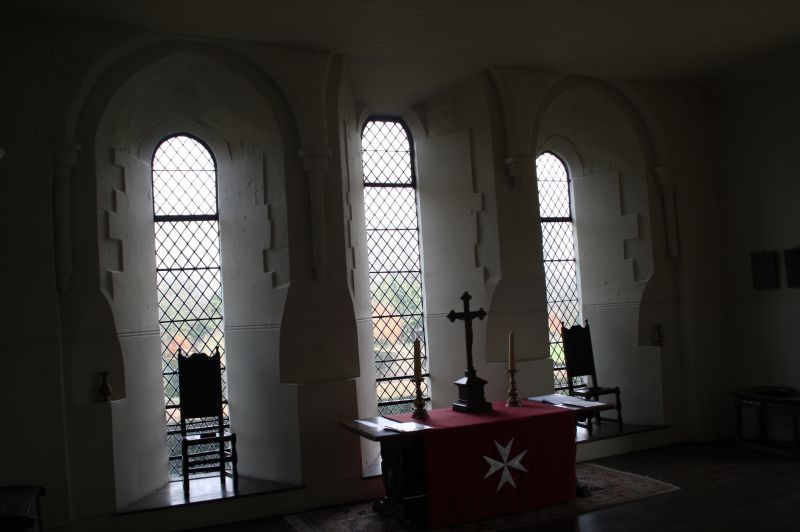 2.
A preceptory of the order of the Knights Hospitallers of St John of Jerusalem
was founded here in 1199 by Robert de Basing. The main portion of the building
dates from the C13 and was the Chapel of the Preceptory, but it was much altered
by Edward Hasted, the County Historian in 1755-6. Two storeys and attics. The
east end is faced with flints and has 2 lancet windows at first floor level which
light the chapel. To the west of these is a buttress of flints and stone, then
a blocked pointed mediaeval stone doorway and then another lancet. Double piscina
inside. The remainder of the original building to the west has been refaced with
red brick in the C18. This has 4 windows, with wide glazing bars intact, on ground
and first floors are stone lancet windows and a doorcase with Gibbs surround and
pediment over. Above the whole of the original portion are 4 pedimented dormers
which were added in the C19. Tiled roof. To the west of the original building
is a late C18 addition of higher elevation erected on the foundation of a C13
tower. This is stuccoed and has long and short quoins at its west end, a wooden
modillion eaves cornice, one window and a pedimented dormer. To the north-east
is an L-wing in buff brick added in the C19. The interior contains a C17 kitchen
with inglenook, main staircase of circa 1755 with turned balusters, a drawing room
with C18 panelling and dado rail and Mrs Hasted's boudoir circa 1755 with fireplace,
panelling, Greek key patterned dado rail and swag ornaments to window wall.
Abraham Hill (1635-1726) a founder member of the Royal Society lived here
from 1667 to 1721 and Edward Hasted, the Historian of Greek, from 1757 to 1776.