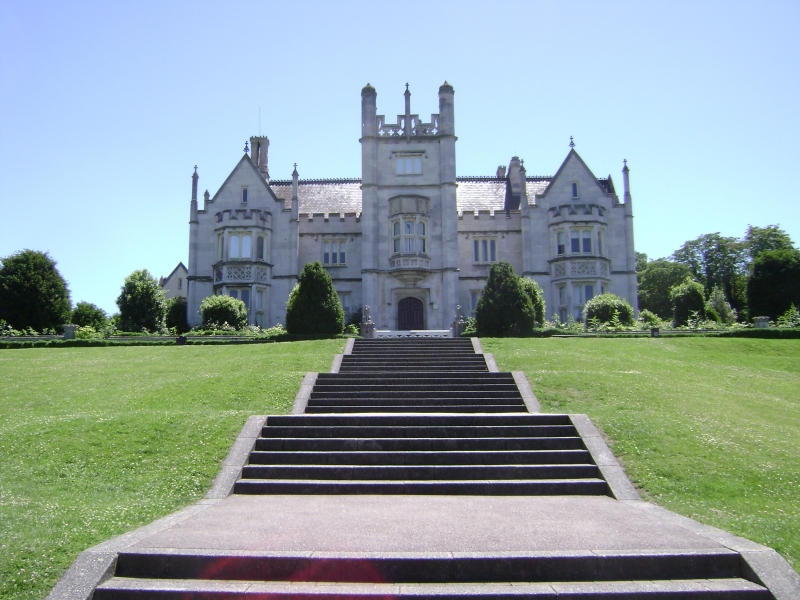 SWANSCOMBE AND GREENHITHE,
THE AVENUE (east side),
Greenhithe,
Ingress Abbey

House built in 1833 for Alderman James Harmer in Tudor Gothic style by the architect, Charles Moreing This is probably the fifth house on the site, the manor having formerly belonged to Dartford Priory and some notable families. It is supposed to have been constructed of stone from the Old London Bridge.

The Victorian poet and journalist Eliza Cook regularly stayed here. She wrote much of her poetry, including her most famous works ‘The Old Armchair’ and ‘O, the green banks may fade’ from her room at Ingress Abbey. Cook was largely self-educated, and was popular with working-class readers. She was also a supporter of women’s rights, and in 1849 began publishing Eliza Cook’s Journal, which was directed at women and working class readers. Cook never married and from 1845 to 1849 was the partner and lover of the American actress Charlotte Cushman, for whom she wrote the poem ‘To Charlotte Cushman’.

The house is of ashlar with a slate roof. It is of two storeys plus attics in the gables with clustered chimney stacks. The plan of the house is three sides of a square with five windows to each front. The principal (north) elevation faces the river. It is flanked by projecting octagonal buttresses carried up high above the elevation and topped by ogee caps. In the centre is a three-storey projecting square tower, flanked by similar buttresses with a three-light oriel window on the first floor. At each end of the front is a gable, the east one projecting. The gables have a two-storey bay window of four-lights with enrichment between the floors and a castellated parapet over. The gable and buttresses are topped with finials. A similar parapet extends between the gables and the tower. The elevation has casement windows. The west elevation has three gables, of which the centre one has an extra-tall finial carried up to end in a heraldic beast. The whole elevation, and the central window bay which projects, are flanked by similar buttresses to those of the north elevation. The central window bay has a two-storey bay window of six-lights similar to those of the north elevation. The central doorcase has a portcullis and rose in the spandrels. The west elevation has wooden window shutters to the top windows. There is a Victorian conservatory at the rear.

The interior contains a dining room with plastered ceiling and walls and a marble fireplace, and a north entrance wall of 1835 with fretted woodwork and a fireplace with Atlantes.