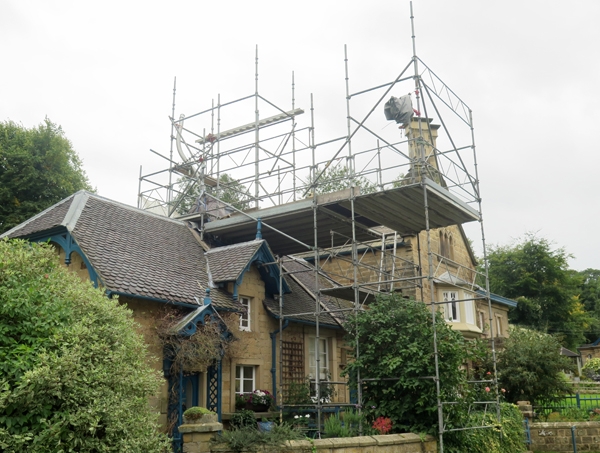 Irregular plan and elevations. The road elevation has a tall gabled bay with, to the ground floor, a two-light casement in chamfered surround with returned hoodmould. Deeply projecting sill on five brackets. Canted oriel above, heavily moulded beneath. Gothic glazing to ground and first floor. Window above of three lancets. Return wall to left has a casement window to each floor, with chamfered surround, bracketed sill and returned hoodmould. To the left a doorway with moulded ashlar surround and returned hoodmould. Gothic panelled door. To the left again a large two-light casement with ashlar surround and bracketed sill. Beyond is a smaller two-light casement with smaller casement above, set in a gabled half dormer with decorative bargeboards. Doorway with bead moulded surround and half-glazed gothic panelled door. Gabled bracketed hood with decorative pierced work to the gable.

Deerlands attached to south west has an elevation of three stepped planes and heights. The first bay has a two-light casement in plain ashlar surround. Projecting bay to right has a two-light casement to the ground floor and a single light above. Projecting two bays to right again have a first floor band, square porch with panelled door in plain surround. Two single light windows above in ashlar surrounds.

Built as part of the picturesque model village by Paxton for the Sixth Duke of Devonshire.