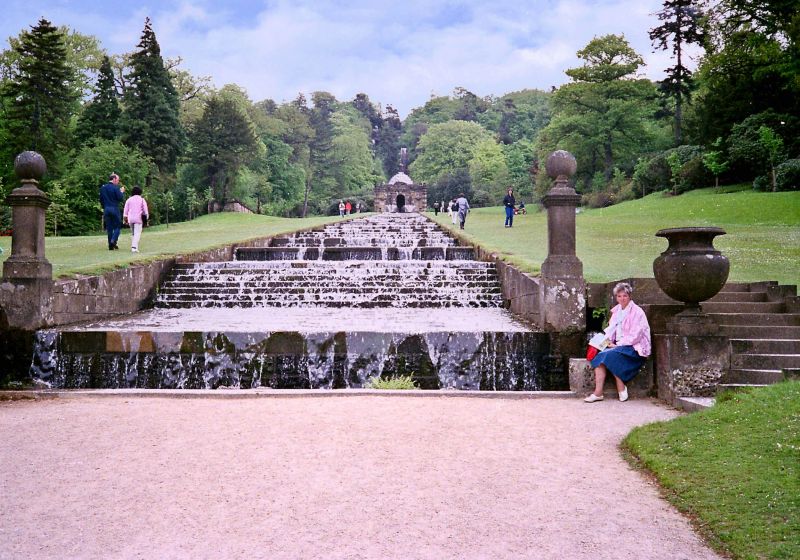 PARISH OF CHATSWORTH CHATSWORTH GARDENS
SK 2670
6/72
Conduit House, Cascade
12.7.67 and adjoining Statues
GV I
Conduit house, cascade with bridge and adjoining statues. c1696
by Grillet, rebuilt c1702 and partly reconstructed c1833 by
Paxton & Holmes including the insertion of a tunnel to conceal
the fuel route to the proposed Great Conservatory. Conduit
House 1702-3 by Thomas Archer. Statues added in early C19.
Coursed squared sandstone and ashlar. The cascade runs in a
straight line, descending in 22 shallow steps. The foot of the
cascade is flanked by six statues of Carrara marble on sandstone
pedestal bases, made in Italy for the Sixth Duke of Devonshire.
Half way up the cascade crosses a tunnel by Paxton & Holmes.
This has plain round-arched entrances below and parapet walls
divided by pilasters into seven bays. Oval pond at the top with
mermaids and lions heads spouting water. Flanked by two further
statues on circular pedestals. The Conduit House is of
sandstone ashlar with frostwork rustication. West elevation
forms a tripartite composition with the walls coming forward in
a curve. The centre has an open round-arch with keystone and
moulded imposts, flanked by paired banded pilasters with two
twisting dolphins. Moulded cornice with a curved projection
over the keystone. To either side are blind round-arched
recesses with rounded corbelled projections. Banded end piers
with scallop shells in the entablature. Parapet surmounted by
statutory. Stepped lead dome, over which water flows,
surmounted by a tall circular domed lantern. The side
elevations have semi-circular flights of steps up to flat arched
doorways with moulded architraves. Circular domed interior has
moulded cornice and round-arched niches, alternately flat backed
and half-domed with shell hoods. Moulded brackets on the piers
and swags between. The sculpture was carved by Nadauld and
Watson. The Gardens and Park are included on the Gardens
Register at Grade I.