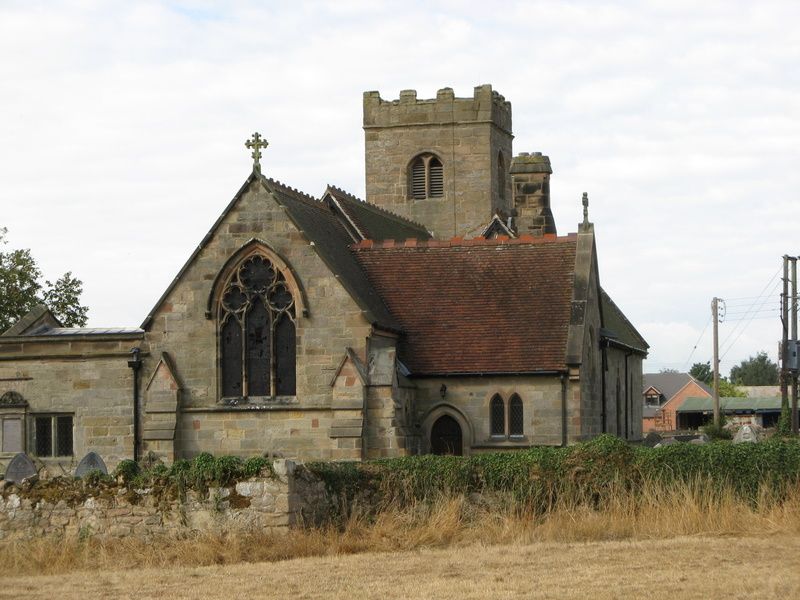 SK 32 NE PARISH OF SWARKESTONE CHURCH LANE
3/237 (East Elide)
10.11.67 Church of St James
GV II*
Parish church. C12 and C16, mostly rebuilt 1874-5 by F J
Robinson. Ashlar and rubble stone with quoins, chamfered stone
plinth and continuous moulded sill band. Red plain tile roofs
with crested ridge tiles, lapped stone copings and eastern ridge
cross, except leaded chapel roof. Nave with north aisle,
western tower and lower chancel with north organ bay and
southern chapel. C16 two stage tower has stepped angle
buttresses up to bell stage to western corners. West elevation
has moulded C19 lancet with carved labelstops to hood, and north
and south elevations are blank except for small staircase
windows to south. Above there are louvred 2-light bell openings
to all sides with four-centred arched lights set in four-centred
arched surround. Above again is a coved stringcourse with
embattled parapets over. North aisle has C19 3-light window,
with geometric tracery and hoodmould with carved stops, to west
elevation and two C19 lancets with two 2-light plate tracery
windows to east, on north elevation. All these C19 windows have
relieving arches over. To east the chancel has a small gabled
organ bay with circular plate tracery window to north and a
small chamfered pointed doorcase plus twin lancets to east.
Beyond to east the wall of the chancel is slightly advanced with
a lapped stone roof and has a small circular window with central
quatrefoil. Eastern corners of chancel have stepped gableted,
clasping buttresses and between is the 3-light geometric tracery
east window with carved labelstops and hood. Attached to south
side of chancel is the C16 Harpur Chapel constructed of rubble
stone with moulded C18 cornice and blocking course, capped by
C19 copings. This has a 2-light C17 recessed and chamfered
mullion window to east and attached wall memorial and chest tomb
beyond to south. Wall memorial and tomb are to Sampson Massey
and wife, who died 1764 and 1787 respectively. Wall memorial has
a classical stone aedicule with slate plaque and chest tomb
below has a panelled end and bolection moulded slab to top.
South wall of chapel has a flat headed C16 4-light window with
segment headed lights and incised spandrels, and west wall has
moulded single light flat headed window. To west the chancel
has one chamfered lancet with relieving arch over and beyond to
west the nave has two 2-light plate tracery windows, also with
relieving arches, and a low chamfered pointed doorcase to west.
East corner has stepped buttress with pinnacled top. Interior
has three bay C19 arcade with high chamfered pointed arches on
short columns with foliage capitals which stand on a deep plain
bases. Chancel arch, also C19, in C14 style with pointed arch
on octagonal responds with moulded capitals, also with hood.
Tower has original C16 tall pointed arch with soffit mould on
corbels. Chancel has C19 two bay arcades to either side, each
with double, chamfered pointed arches on twin central columns
with foliage capitals, that to north into organ bay and that to
south into Harpur Chapel. Beyond to east on north side is a C19
cusped niche housing a C15 tomb. East end of north aisle has
two pointed C19 arches on central pier with attached half
column. Roofs all C19, that to chancel barrel vaulted and those
to nave and aisles with arched braces, except for cambered C16
roof of chapel. Plain nave pews, organ, choir stalls with
arcaded fronts, plain oak reredos and metal altar rails, all
c1874, as is the octagonal marble pulpit with inlaid semi-
precious stones. Stone font with circular bowl on octagonal
base, probably C14. Several fine monuments including three in
Harpur Chapel, one wall memorial to Frances Willoughby, wife of
Sir John Harpur, who died 1714, and two chest tombs with
effigies to Sir John Harpur, who died 1627, and his wife, and
Richard Harpur, who died 1573, and his wife. The wall memorial
is of painted alabaster with grand classical aedicule, topped by
an achievement, chest tombs are also of painted alabaster, that
of c1573 by Royleys. This tomb has a deep plinth with small
shields in cusped circles to centre of each side and recumbent
figures over, the man clothed in robes. The other tomb is of
superior quality and has the kneeling figures of the sons and
daughters to the base, each with painted shield over and their
names, each a portrait. Above there are two life size recumbent
figures, Sir John clad in armour. Above, again on the wall is a
strapwork cartouche with gold lettering. In the tomb niche in
the chancel is the alabaster tomb of John Rolleston, who died
1482. This has a blind arcaded base with angels to sides and
sons and daughter in relief to centre panels. Above,the slab
has incised figures of knight and lady with latin inscription to
edge, all inlaid with metal. The nave has two early C20 wall
memorials and a George IV painted hatchment on north wall of
aisle. East window has c1874 stained glass window and tower and
north aisle have single light stained glass windows of c1888.