The Grandstand, Cuttle and gate 200 metres north of Swarkestone Hall

A Grade I Listed Building in Swarkestone, Derbyshire 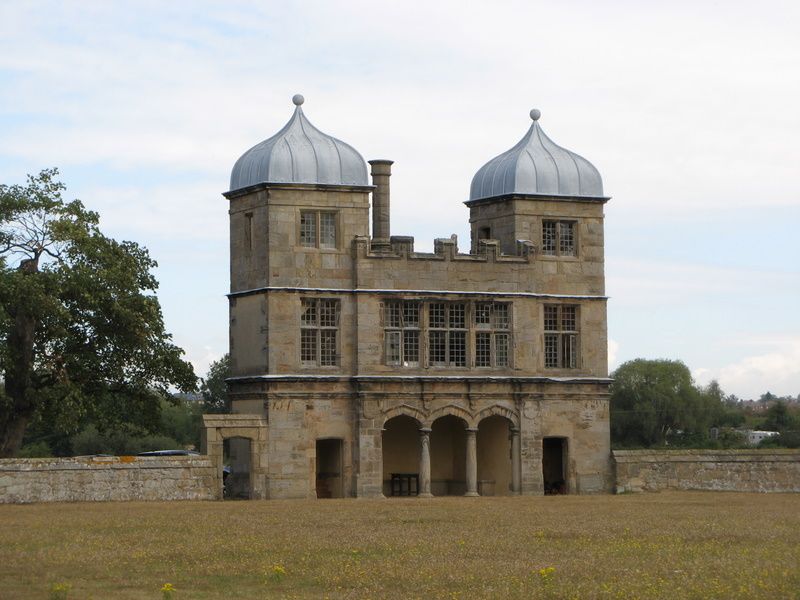 GV
I
Bowling green, pavilion and enclosure, now a Landmark Trust property. c1630, built for the Harpurs of Swarkestone Hall and attributed to John Smythson. Restored in early C19 and converted 1985.

Ashlar with rendered stone and raised quoins to side and rear elevations, plus first and second floor stringcourses. Towers have domed ogival leaded roofs with ball finials and coved eaves cornices, whilst centre bay has embattled parapets with ridgeback copings hiding a flat roof which has a very tall octagonal stone chimney, with moulded base and top, to centre of the rear wall.

The pavilion has three storey towers to either side of an advanced two storey centre and it stands to the north of an irregular rectangle of walls with a central gate to southern end. Pavilion has a continuous entablature-like band to first floor. The advanced centre bay has a loggia to ground floor with three depressed oqee headed arches on Tuscan columns with moulded hoods. To either side there are wide pilasters with central shield decorations to top with small drop motifs to each side. Above the columns and pilasters the entablature breaks forward on shield-like corbels, decorated with Harpur crests. Towers have moulded four-centre arched doorcases. Above to centre there is a six-light ovolo moulded mullion and transomed window with two major mullions and leaded lights. Each tower has a two-light cavetto moulded mullion and transomed window with continuous plain band at lintel level. Above, the towers have a two-light recessed and chamfered mullion window. Rear elevation has single light recessed and chamfered windows with dripmoulds to towers and a blank wall to centre bay except for a two-light basement window.

Interior has a moulded four-centred arched fireplace to first floor room and four-centred arched doorcases. Remains of unusual gypsum plaster survives on some walls. Attached to either side of the pavilion there are rubble stone walls with triangular sectioned ashlar copings.

Southern gateway has a moulded four-centred arch and coved cornice with embattled parapets over. Girouard suggest that this is the 'bowle alley house' for which the mason Richard Shephard was paid £111 12s 4d in 1630-2.