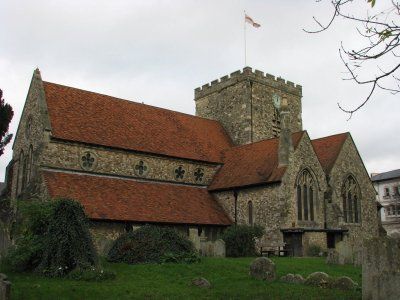 Parish church. C12, C13, C15, 1832, and 1874. A cruciform transitional
building with later changes, including chancel of the C13, a C14 vestry,
transepts with western aisles of the C15 (the south being much restored)
nave of 4 bays with aisles, having been rebuilt in 1832, and again in
1874, when the tower was rebuilt above the arches. Restored exterior with
flint and stone rubble walls, with stone dressings, red tile roofing with
double gables to the transepts, crenellated parapet and octagonal stair
turret to the tower. Within, the chancel of 2 bays has a quadripartite
ribbed vault and an original lancet, there are old arches on octagonal piers
to the 2-bay north transept, the original tower arches rest on massive
columns with scalloped caps and Purbeck recessed shafts. The later parts
follow the Transitional style, but windows are mostly Perpendicular
traceried lights (with some original fragments). There are several C18
wall monuments and a brass to Thomas Aylward (1413).