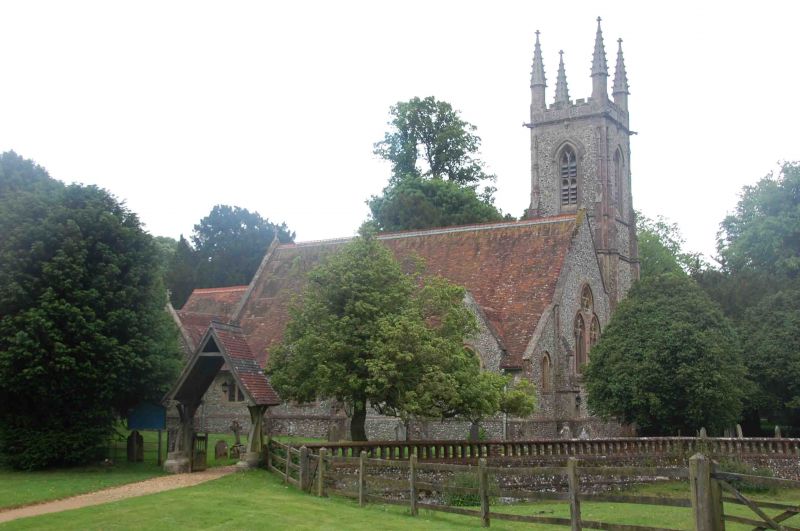 Parish church. 1871, by Sir Arthur Blomfield; earlier chancel. Flint walls and tiled roof. A medieval church, with many alterations, was substantially destroyed by a fire in 1871, and replaced by the present building which incorporates part of the old chancel. Early English style with Geometrical tracery. Nave of 4 bays with north aisle, chancel with north vestry, and a tower south of the west bay of the nave. The roof of the nave extends over the aisle, with gables to 2 of the bays; the chancel and vestry have lower roofs. The walls are of flint with Bath stone dressings, stepped buttresses and plinth, windows of coupled cusped lancets are of Geometrical form: tall coupled west windows below a triangular window, all under one hood mould. The tower is slender, with corner pinnacles, crenellated parapet, and thin stepped corner buttresses, a south-east stair turret, the ground floor acting as an open porch. Inside, there are Early English details and Victorian Gothic furnishings. From the old church there are several wall monuments (of 1723,1737,1802 and 1841) and an imposing classical monument of 1679, in the chancel, to Sir Richard Knight, showing a recumbent figure in white marble resting on a Table Tomb, with a background panel within a framework of Corinthian Order, surmounted bya shield. There is a reredos triptych by CF. Bodley, with a Crucifixion (c1600 by a Netherlands painter) flanked by panels, each containing 2 figures of saints. Rood screen by CF. Bodley with carved wooden Crucifix. C18 Communion rail Stained glass by Kemp. Nave pews replaced in C20. Nave roof is of hammerbeam type with arch braces on large brackets. SOURCE: Buildings of England, p.163.
31.7.64