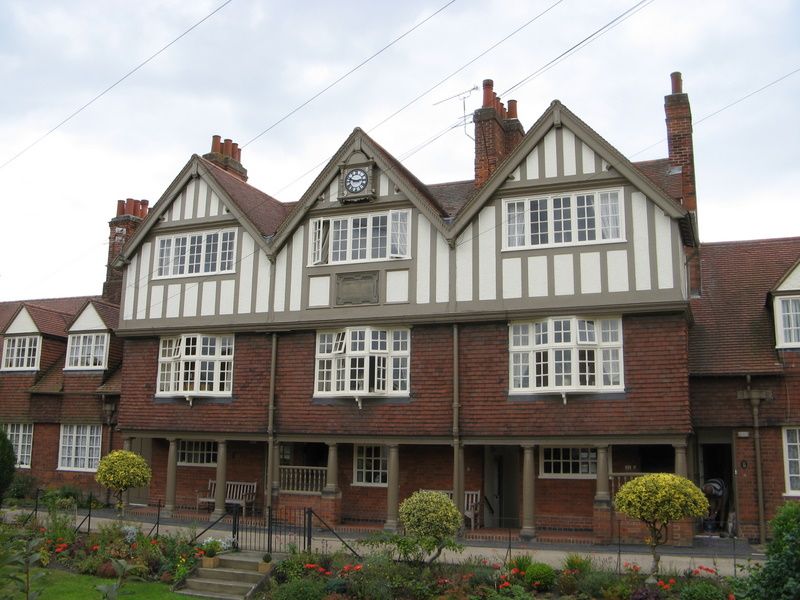 SK 38/3925 PARISH OF MELBOURNE HIGH STREET
6/116 (South Side)
Thomas Cook Almshouses,
Chapel and Railings
GV II
Almshouses, chapel and railings. 1891 by G Burgess for Thomas
Cook, the famous travel agent. Red brick with tile hanging and
applied timber framing to the attics and some terracotta
dressings. Steeply pitched red clay tile roof with large brick
ridge stacks with semi-circular headed panels to sides, and
moulded brick coped gables to caretakers house and the chapel,
both of which are at the street end of the side wings. U-plan
with seven bay central range and four bay side wings, three
central bays of the central range advanced. Mostly single
storey plus attics but with single storey chapel and two storeys
plus attics to three central bays. These central bays have a
Tuscan columned arcade to ground floor with four plain
doorcases, two leading to an open staircases, and three small
pane windows behind. Above there are three 5-light timber
mullioned casement windows with central 3-lights of each canted
out to form small oriels. Above again there is a jettied attic
storey with applied timber framing and 5-light timber mullioned
casements to each gable. Below the central window there is a
moulded plaque with inscription 'Memorial House of call for Mr
Cook and invited friends', and above there is a projecting
pedimented clock with balusters to either side. Beyond the
central bays to either side there are plain panelled doors and
two 3-light small paned casements plus two gabled roof dormers
over with similar windows. Beyond again there are angled
segment headed doorcases with brick pilasters to each side and
brick cornice above, across each corner. East wing has three
similar 3-light windows to ground floor and above in gabled
dormers, with two panelled doors between the northern windows.
To north end, the caretakers house has advanced gabled bays to
west and north, that to north with canted small paned bay window
to ground floor and stone plaque above inscribed 'Memorial
Cottages Caretaker No 1', also three small paned casements
above, that to centre larger than the other two, set in a
pilastered surround with semi-circular blind arch over the
central window. North elevation has three semi-circular headed
arches to ground floor with railing across, and three small
paned windows above in a pilastered surround with moulded eaves
cornice, topped by ball finials to the corners. Wet wing has
an advanced gabled bay to north of the angled doorcase with
2-light window below and 4-light one above, also with lights to
each side of the bay. Beyond to north is a double chamfered.
segmental arched brick doorcase into the chapel with buttress
beyond and three 4-light terracotta flat headed windows with
four-centred arched lights and incised spandrels. North
elevation has similar 4-light window with plaque inscribed
'General Baptist Memorial Cottages and Mission Hall. Erected by
Thomas Cook, a Native of Melbourne 1890'. To centre of the
chapel roof is a square tile hung bellcote with louvred top and
ogival leaded roof. Between the wings there are the original
railings with two sets of gates, one to either side.