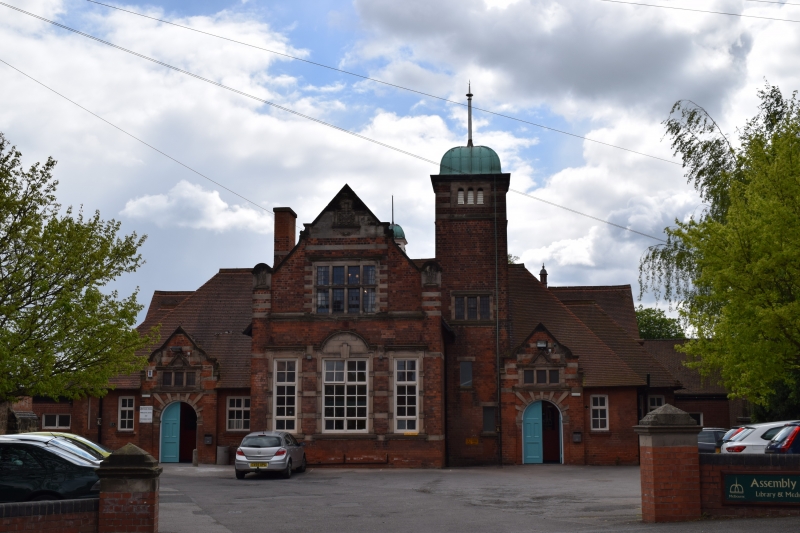 SK 38/3925 PARISH OF MELBOURNE HIGH STREET
6/113 (South Side)
Leisure Centre and
Library
GV II
School, now library and leisure centre, 1897, with various
later alterations. Red brick with brick and stone dressings and
steeply pitched red clay tile roofs with wide eaves, one brick
ridge stack, several elaborately moulded terracotta ridge vents
and a tapering square cupola with domed copper roof and louvred
sides to rear roof, also with moulded stone copings to the
gables and domed copper roof to the tower with flagpole to top.
Square plan and single storey with attic to centre bay of north
elevation. Main north elevation has advanced central bay with
recessed wings to either side, each with an advanced central
gabled doorcase, and a three stage tower between the western
doorcase and the central bay. This central bay has flush stone
bands at sill and lintel levels of ground floor windows and
similar to sill level of upper window. Ground floor has central
timber cross window flanked by similar single light windows,
each set in a moulded surround with quoined jambs and shouldered
corners. To either side of the central window there are flush
stone bands between the window quoins. Side windows have egg
and dart moulded dripmoulds and central window has similar
semi-circular hood with plain ashlar tympanum and a double
keystone to the top of the window surround. Above there is a
slightly advanced central 4-light recessed and chamfered mullion
and transomed window with quoined jambs, and dripmould. To
either side the corners have banded pilasters with semi-circular
headed coping stones, that to east inscribed 'ANO 18' and that
to west inscribed 'DNI 97'. Eared gable above has central stone
shield inscribed 'MSB'. Wings to either side have central
doorcases with moulded stone semi-circular arches, plus
radiating quoins, and flush bands to shaped gables above with
3-light mullioned openings, pedimented over central lights.
Eastern door is flanked by a 2-light casement to west and a
single light one to east. Similar window to west of western
door and tower to east. This has two inserted windows to ground
floor, a 3-light mullion window above and a banded top stage
with triple, louvred semi-circular headed openings to all sides,
plus moulded cornice over. Side elevations have large gabled
bays with central 2-light semi-circular headed casements flanked
by lower similar single light windows, plus continuous moulded
sill band and brick pilasters between to the top oil the windows
rising into the pebbledashed gable above. Interior has very
plain rooms with arched braced roofs.