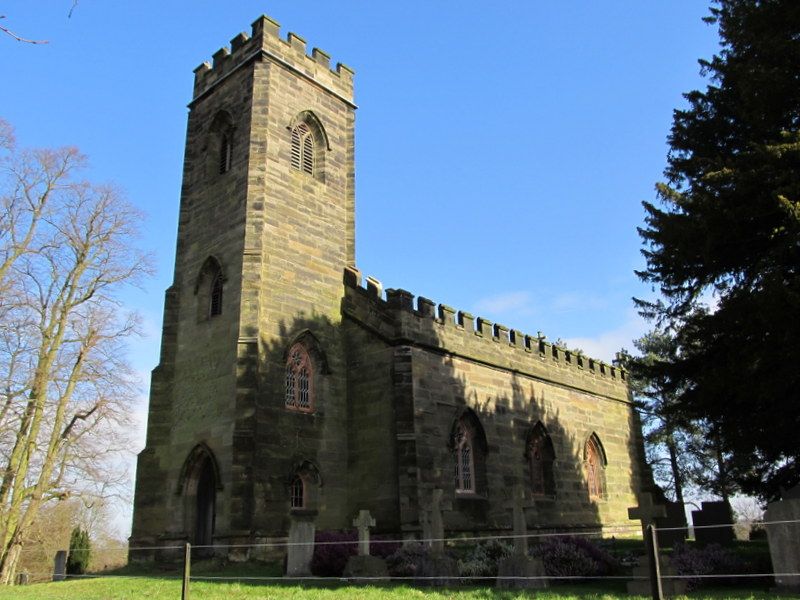 PARISH OF CALKE CALKE PARK
SK 32 SE
4/20
19-1-67 Church of St Giles
II
GV
Private chapel. Rebuilt in 1826-8. Sandstone ashlar, roof
hidden behind parapets. Chamfered plinth and moulded band at
the base of the parapet. West tower, undivided nave and
chancel. Tower and nave have diagonal buttresses and tall
battlemented parapets, with three cross finials on the east
gable. The undivided west tower has to north and south a deeply
set broad low lancet with gothick glazing bars. Larger 2-light
window above also deeply set and with tracery as in the nave.
The west elevation has a pointed doorway with hollow moulding
and panelled double doors with gothic tracery. 2-light louvred
opening above with Y-tracery. Nave and chancel of three bays
with to north and south three 2-light windows with cast iron
reticulated tracery and geometric glazing bars, made by a Derby
firm. Set in deep double chamfered surrounds. 3-light east
window with reticulated tracery. All the windows have moulded
hoodmoulds. The east window is flanked by four-centred arched
sunk panels with inscribed slabs set in. Interior: West
gallery with gothic panelled front. Four-centred arch above to
organ loft with hoodmould on headstops. The organ set in has a
gothic case with castellated top. Four-centred arched plaster
ceiling divided by slender moulded beams into squares with
floriat bosses. Coved cornice. Simple open-backed gothic pews
and squire's box pew with gothic panelled sides, linked to a
two-decker reading desk. Octagonal wooden pulpit with two tiers
of thinly gothic panels. Jacobean Style dado to east wall.
Spindly cast metal gothic communion rails around three sides.
Stained glass in the east window c1844, pictoral and with bright
colours, very characteristic of the period. Monument: On the
north side in a segmental arched recess behind iron railings by
Robert Bakewell (though probably altered). To Sir John Harpur
+1741, by Sir Henry Cheere. Sarcophagus flanked by busts with
cherubs below and the usual pyramid above. Excellent quality.
On the south side a large carved tablet to Sir John Harpur
Crewe, Ninth Baraonet +1886. Font with tapering circular bowl
on a base of clustered shafts. Lozenge pattern stone flagged
floor with circular brass grills, one inscribed
Harrison Derby 1828. Three lozenge hatchments. The interior is
a well preserved example of a late Georgian interior and is more
characteristic of the time than the exterior which looks forward
to the more serious C19 gothic revival.