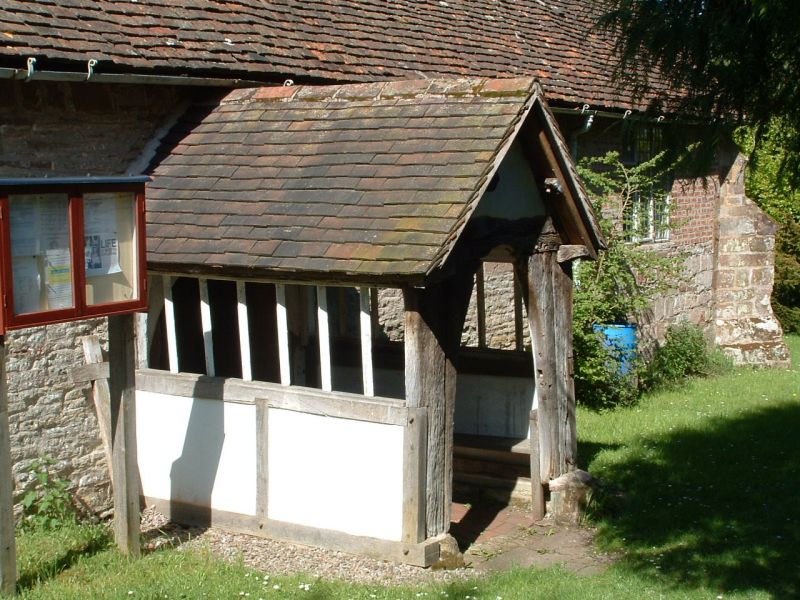 BRANSFORD CP -
SO 75 SE
2/4 Church of St John
the Baptist
29.7.59
- II*
Church. C13 with C14, C15, C17 and later alterations. Restored 1957.
Stone rubble with some brick, and tile roof. Comprises a nave and con-
tinuous chancel with west bell turret and south porch. The west wall
contains a chamfered one-light window with elliptical head. At the west
end a weatherboarded add louvred bell turret rises above the roof and has
a pyramidal roof. On the south side there is a C13 chamfered lancet to the
left of the porch. To the right is a window of a single trefoiled ogee light
under a flat head. Further right is a 3-light window with timber mullions,
rectangular lead glazing, and brick reveals. The right-hand (eastern) end
of the wall is of brick on a stone base. The doorway has an ogee-arched
head and is covered by a timber porch. The gable wall of the porch has
paired posts, the inner ones forming an arch with the tie-beam. The side
walls have timber mullions above a middle rail and have wall-plates which are
chamfered in two orders. The inner truss has arch-braces. The east wall of
the chancel is of brick and has a timber window of four lights with transom
with a segmental brick arch over its flat head. The north wall shows evidence
of rebuilding. To the right of a buttress is a window of two trefoiled lights
under a flat head. To its right is a chamfered doorway with Tudor-arched head.
Interior: Collar rafter-roof has curved braces to collar, two tie-beams; the
eastern one supports two vertical struts. The wall-plates are moulded. In
the south wall is a piscina in a flat-headed recess. A fragment of wall-painting
is exposed at the east end of the north wall. The tower is supported on four
timber posts with diagonal braces: much of the timber has been renewed. On the
east side a timber-framed wall divides the tower from the nave. It contains
two blocked wood-mullioned windows and a plank door with wooden handle.