A Grade I Listed Building in Romsley, Worcestershire 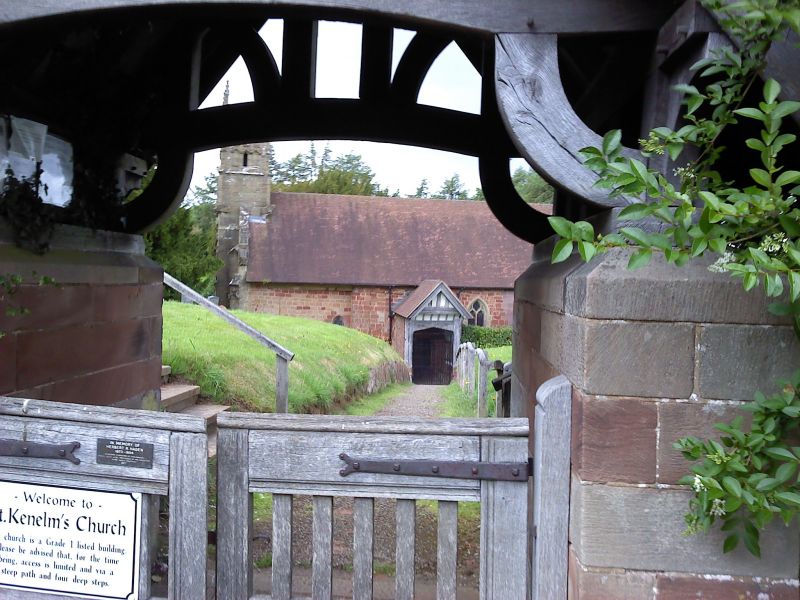 West tower: C15 on C12 base; grey sandstone and of slender proportions; three stages with chamfered plinth, offset above lower stage and strings above second stage; tall west archway with four-centred head and hoodmould with large finial and grotesque stops (this once provided access to a C12 doorway blocked in C19). Upper two stages have small diagonal corner buttresses with offsets and a large winged gargoyle at each base. Belfry stage has crocketted and finialed ogee-arched bell chamber openings with flanking niches of similar design. These niches are repeated in the corner buttresses which are terminated by gargoyles at the parapet base. The parapet is embattled, has blind cusped pointed arcading and tall crocketted corner pinnacles.

Nave and chancel: C12; east wall rebuilt C14; diagonal corner buttresses with offsets (south west one has a crocketted and finialed ogee-arched niche). West wall within tower arch has blocked C12 archway with C19 rectangular light and, above the C12 archway a three-light C19 window with four-centred head. Side elevations of westernmost bay are recessed and have a chamfered eaves cornice. North elevation has three original pilaster buttresses and a C19 buttress; a C13 window of two lights with a square head, a similar C19 window and a C14 lancet at the eastern end (to the west of which is a C12 jamb). C14 door has been inserted beneath the eastern buttresses and there is also a blocked C14 entrance opposing the south doorway. The south elevation has an original pilaster buttress and a C19 one. There is a two-light C14 window with hood mould at the eastern end situated above a C14 archway which once led to the undercroft. Also two other two-light windows, one C14 but much restored, the other C19 and C19 cusped lancet. To the upper right of the second window from the east end is a small relief of a figure with a hand raised in benediction (probably re-set).

South porch: C15; timber-framed with rendered and brick infill on chamfered sandstone base; gabled roof with overhanging eaves on shaped brackets and moulded bargeboards; four-centred archway with foliated relief carving in spandrels; coved jetty above supports a brattished tie beam; also brattished wall plates within and stone benches survive. South doorway is c1150 of two shafted orders, the outer enriched with a form of ray and fillet moulding, the inner with a beakhead moulding (recorded as, being the most complete in the county, BoE); shafts are much restored. The brown sandstone tympanum represents Christ in Majesty (with ribbed draperies of Herefordshire school) and has a broad interlaced borders.

East end of the church is C14; three tiers of plinth bands, large pointed archway with inserted C20 door provides access to undercroft, above is a three-light C19 window with sill beam and hoodmould; also band at base of gable and blind rectangular light in apex.

Glass: south window probably by Sir Edward Burne-Jones of c1905 with figures of Peace and Faith.

According to disproved legend the church is built on the site of the murder of St Kenelm, the boy Prince of Meraci in 819 AD. A holy spring rose from the ground and a shrine was built which became a chapel of ease to Halesowen Abbey and later was made a parish church in 1841. The church retains a substantial proportion of its Norman masonry including the impressive tympanum and mouldings of its south doorway; the striking detailing of its west tower and the C15 jettied porch are also of particular note.