Parish Church of St John the Baptist (Church of England) 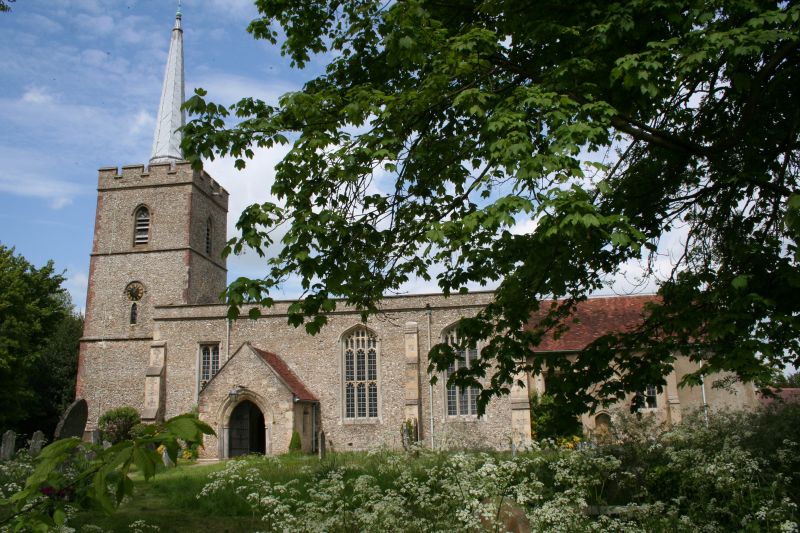 Parish church. Mid C14, possibly incorporating earlier fabric, with C15, C16 and C18 alterations and additions, restored and re-seated in 1886. The Lady Chapel was restored in 1954, and some minor interior alterations were carried out in the late C20.
MATERIALS : Rubble walling with flint facings and Clunch dressings, some now replaced in limestone and red brick,with later repair work in red brick and render. Lead sheet roof coverings to nave and spire, plain tile work to chancel and porch.
PLAN: West tower with spire, nave with south porch, chancel with Lady Chapel and vestry along the north side of the chancel.

EXTERIOR: The tower is of three stages without buttresses, with an embattled parapet and a slender octagonal spire. Restored east door and tall two-light east window above. There is a clock and a small window to the middle stage and larger cusped bellchamber openings. South porch with a gable parapet and a dripmould to its arched entrance. Each side wall has a two-light window. The tall, wide four-bay nave has stepped buttresses and tall two and three-light transomed windows, that to the west of the porch flat-headed, those to the east with shallow arched heads. There is a rectangular chancel of three bays with two perpendicular windows to its south wall, one in a C15 opening. A blocked doorway is set between the windows and has a small quatrefoil window above. The Lady Chapel to the north of the chancel has two, wide, C15 traceried windows and a C15 west doorway.

INTERIOR: The C14 tower arch is of three chamfered orders, only the innermost having caps and bases to jambs.There is a graffito of a postmill on the north jamb. The nave has a six-bay, C15 arch-braced king-post roof of low pitch. Its moulded purlins meet moulded demi-principals in foliate bosses. On the north wall of the nave is a large, C15 polychrome mural of St. Christopher in a landscape of roads and villages. Opposite hangs a painting of the Royal Arms purchased in 1712. In the north-east corner are the openings from the external turret enclosing the rood stair into the nave, together with a C14 piscina and a fine grey Derbyshire, crinoidal limestone, font of 1739 with a gadrooned bowl on a baluster stem and octagonal base. The doorway to the south porch has a fine C15 carved oak door with panelling and embattled rail. The organ of c.1830 is by Flight & Son. Two hatchments of the Soames family are set on either side of the early C14 chancel arch. The arch is of two moulded orders with clustered shafts and moulded caps and bases. The chancel roof is of three bays with arch-braced collar trusses rising from cambered tie beams with traceried spandrels. The east bay is boarded with painted ribs, and the three-light east window is of c.1866. A C14 piscina and sedilia under a moulded arch are set within the south wall, whilst the north wall has a C15 arcaded opening into the Lady Chapel, now infilled with a late C20 glazed timber screen and doors. The chapel has a cinquefoil cusped opening into the nave with C14 jambs but a C19 head, and a C15 piscina in the south wall. The roof timbers also appear to be C15. The vestry has its entrance from the chancel and is lit by a 2-light C16 cusped window with ferramenta supporting the stained glass. Its north wall has a small door with original ironwork. The chancel floor is covered in encaustic tiles. There are fragments of medieval stained glass in the heads of the nave north windows and the three-light Crucifixion scene in the east window of 1886 is by Clayton and Bell. The two-light window in the south wall of the chancel is by Morris & Co.

MONUMENTS AND PRINCIPAL FIXTURES: An inscription brass in the chapel to Litton Pulter of 1608. C17 Heraldic inscribed ledger stones in the chancel to the Forester and Pulter families. On the chancel south wall, a monument to Margaret Forester of 1757 with marble lectern, rococo cartouche and winged skull, and a monument to the reverend Angel Chauncy of 1762 as a marble aedicule with achievement in the form of a draped urn over. On the north wall a rococo marble cartouche to Martha Forester of 1755, and a Neo-Classical monument to the Reverend Anthony Trollope, grandfather of the novelist. The wooden panelled pulpit is a C20 acquisition from St Leonard's Church, Shoreditch.

REASONS FOR DESIGNATION DECISION:
The church of St. John The Baptist at Cottered in Hertfordshire is listed at Grade ll* for the following principal reasons:

* The church is mid-C14 in date, possibly on the site of an earlier building, with C15, C16 and C18 elements and it retains clear evidence of its phases of evolution.

* The church is almost wholly of medieval fabric of high quality, illustrative of the best medieval constructional techniques, masonry and carpentary skills.