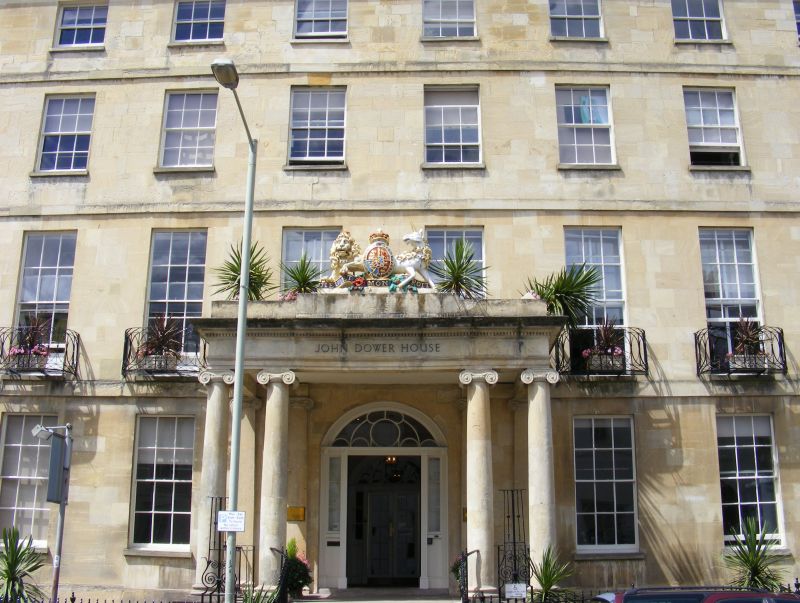 full-height bow. Original joinery remains including 6-fielded
panel doors, with fluted architraves and flowers to corners,
and some panelled shutters (now painted in). Original
plasterwork includes first-floor cornices with dentils to
first-floor main room and modillion cornice to entrance hall.
Range to left has further narrow-open-well staircase with rod
and bobbin balusters and wreathed handrail.
SUBSIDIARY FEATURES: spearhead area railings and to sides of
steps incorporate brackets for oil lamps with lyre motif.
First-floor individual balconies have interlaced-circle motif.
HISTORICAL NOTE: originally Liddell's Boarding House, this was
the first structure of any size to be built specifically in
Cheltenham for its Spa visitors. In 1827 Adelaide, Duchess of
Clarence (later to become Queen Consort to William IV) stayed
here during a tour of the country, hence the Royal Coat of
Arms (of a type used 1816-37). The building was renamed the
Clarence Hotel in her honour. It became the Court House and
Police Station in 1859 and remained as such until 1970. The
building was renamed by the Countryside Commission when it
moved into the premises (1974) in honour of one of the leading
pioneers of national parks in England and Wales.
Forms a group with No.2, Crescent Place (qv) and No.42,
Clarence Street (qv).
(The Buildings of England: Verey D: Gloucestershire: The Vale
and The Forest of Dean: London: 1970-: 134; Chatwin A:
Cheltenham's Ornamental Ironwork: Cheltenham: 1975-1984:
26,61).