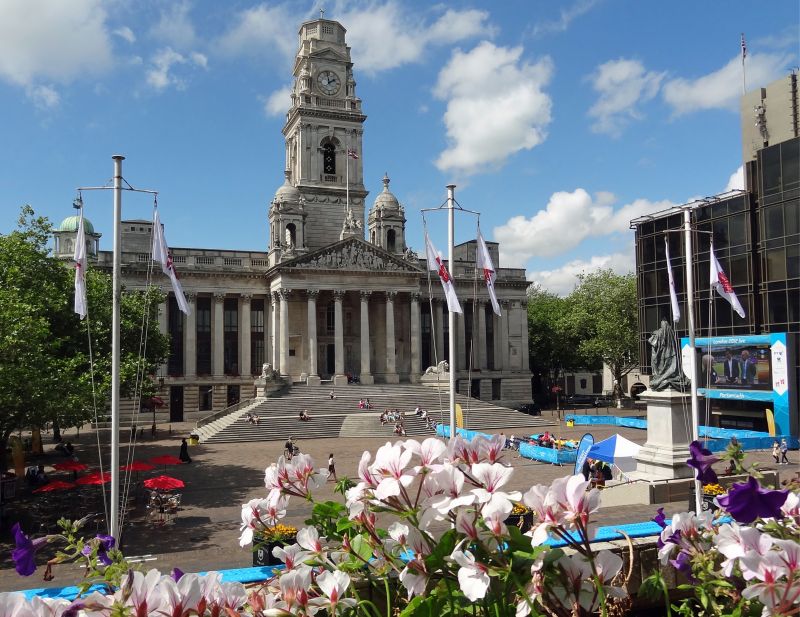 This entry was subject to a Minor Amendment on 7 January 2022 to reformat the text to modern standards.

EXTERIOR: Two storeys, high basement and attic. Seventeen bays. (End bays and each of the two bays flanking centre are blind). At centre is a giant hexastyle Corinthian portico, entablature with modillioned cornice and pediment with sculptured tympanum crowned with statue of Neptune set on acroterion, ante-fixae at each side with surmounted sculptured figure. Flanking portico is a pedestal, each with couchant lion. Grand splayed central staircase rising 32 steps to column bases then five steps approach main entrance. Large two-leaf door, each leaf with ten moulded panels set under stone frieze, wide flanking Doric pilasters each with sculptured shaft, frieze and cornice. Over on first floor is a round-headed casement, recessed behind balustrade, with leaded lights set under round stone arch with similar flanking Doric pilasters.

On left and right of entrance is a projecting wing, each flanked by a giant Corinthian pilaster, and each face has an incised panel with floating frieze and cornice. At roof level on each side of the portico is a cupola with, on each face, a round-arched opening with keystone and moulded imposts, flanking Ionic pilasters, entablature with dentilled cornice, stone dome with swept top. At centre and to rear of cupolas is a three-tier tower with horizontal rusticated base, cornice with swag below. Middle bell stage has on each side a round-arched opening with curved reveals set behind a balustrade, moulded round stone arch, keystone and moulded imposts; paired Corinthian pilasters at each corner, entablature with modillioned cornice. Top stage has balustrade with corner open columned turrets, clock face on each side with pediment, parapet with recessed corners crowned by mid-C20 flat topped octagonal storey (replacing the original dome and cupola).

On the left and right of the portico is a horizontal rusticated high basement each with two eight-panelled two-leaf doors with 12-pane overlight and two 24-pane metal casements each set under heavy moulded cornice. Giant Corinthian columns tetrastyle in antis running through ground and first floors, entablature with modillioned cornice, balustraded parapet. To facade behind columns are five metal casements running integral through ground and first floors; each casement has two square panes top and bottom and two long centre panes. At each end is a blind projecting bay with giant Corinthian clasping pilasters, each face with an incised panel and floating frieze and cornice. At roof level recessed behind each corner is a mid C20 square structure (replacing the original cupola). To left and right return each facade 13 bays wide is similar except that the first floor casements are each set under a round arch and central seven bays project with giant Corinthian columns.

The INTERIOR and rear elevation were completely rebuilt mid C20.