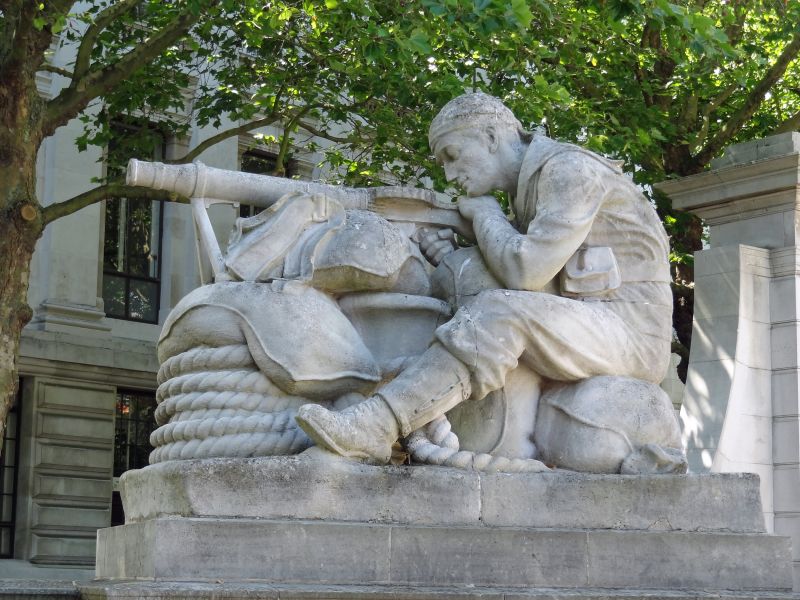 The City of Portsmouth War Memorial, unveiled in 1921, designed by J S Gibson and W S A Gordon, with sculpture by C S Jagger; the builder was Samuel Salter.

First World War memorial, unveiled in 1921, designed by J S Gibson and W S A Gordon, with sculpture by C S Jagger; the builder was Samuel Salter. The memorial was partially reconfigured in the 1970s.

DESCRIPTION: the memorial takes the form of an exedra, with a semi-circular screen enclosing a sunken area. To the inside of the screen are fixed, slightly curved bronze plaques bearing the names of around 4500 of the dead, with those who served in the army to the north, and those who served in the navy to the south; a panel was reserved for the Royal Air Force, and the names of servicewomen are placed in a central position. In the architrave above the plaques is the inscription, ‘THEIR NAME LIVETH FOR EVERMORE’. There are two round-arched openings, each with a wrought-iron gate. The arch to the north leads to a passage under the railway and into Victoria Park; that to the south leads to an area to the north-west of Guildhall Square. At either end, the screen terminates in a segmental rusticated niche with flanking rusticated piers; within each niche is a bronze-painted urn above a stone seat. Above, set within the broken entablature, is a carved trophy – clustered weapons bristle above a shield flanked by oak and laurel branches, surrounded by scrolled acanthus, the whole topped by a crown. At the centre of the memorial three stone steps surround the cenotaph pier, which has relief carving of wartime scenes on land and at sea to each side, including marching soldiers, and a naval gun crew in action; there is a Greek-key cornice above. The pier is surmounted by a gadrooned sarcophagus urn. A plaque on the cenotaph reads, ‘THIS MEMORIAL WAS ERECTED BY THE PEOPLE OF PORTSMOUTH IN PROUD AND LOVING MEMORY OF THOSE WHO IN THE GLORIOUS MORNING OF THEIR DAYS FOR ENGLAND’S SAKE LOST ALL BUT ENGLAND’S PRAISE. MAY LIGHT PERPETUAL SHINE UPON THEM.’ The front of the memorial is partially enclosed by a stone balustrade, completing the circle; the balustrade originally extended to the east, curving inwards. Part of the balustrade has been reused to create a screen between the memorial and the north-west part of Guildhall Square. The entrance to the memorial, to the east, is marked by stone pedestals, each holding a seated sculptural figure: to the south is a sailor with a Lewis gun and to the north is a soldier with a Vickers gun. These sculptures were originally set parallel to each other, facing forwards and flanking the entrance when it was further east; in their new position they are slightly angled, opening out the entrance. A plaque on the north plinth notes that the memorial was erected by public subscription; a plaque on the south plinth commemorates its unveiling. A stone tablet on the north plinth was placed in 2003: ‘TO HONOUR ALL THOSE WHO DIED / SERVING THEIR COUNTRY IN / TIMES OF PEACE OR CONFLICT / ‘WE WILL REMEMBER’’.

Portsmouth’s First World War losses were very great, with about 6000 believed to have been killed, serving in both the army and the navy. As a great naval port, Portsmouth provided a high proportion of those who served and died during the conflict, including in the largest naval action of the war, the Battle of Jutland (31 May-1 June 1916).

In the immediate aftermath of the First World War, a War Memorial Committee was established with the purpose of commemorating the servicemen and women of Portsmouth who had lost their lives. A prominent site was chosen near the Guildhall, Victoria Park and Commercial Road, and immediately to the south of the railway, the semi-circular screen of the war memorial reflecting the curve of the railway embankment. A competition for the design was won by Messrs Gibson and Gordon of London. Samuel Salter’s tender for the building of the memorial was the lowest received, but at £19,997 was still above the estimated cost. The architect and builder were instructed to decide which items could be removed from the design, and as a consequence a number of features including a fountain, ironwork, statuary, and an arch connecting the memorial with the railway were omitted. It was decided that as well as the cenotaph – the word deriving from the Greek for an empty tomb – two statues should be included, one of a naval and one of a military nature. The sculpture was by Charles Sargeant Jagger, who saw active service during the First World War, for which he was awarded the Military Cross. Jagger brought realism to his depiction of conflict, working on a number of war memorials, of which the most celebrated is the Royal Artillery Memorial at Hyde Park Corner (1921-5). The foundation stone of the Portsmouth memorial was laid on 25 May 1921 and the monument was unveiled, as yet incomplete, on 19 October 1921, in a ceremony attended by more than 30,000 people.

In the early 1970s, the area of Guildhall Square was redeveloped, and as a consequence the war memorial was reduced in size – originally semi-circular to the west and extending in a roughly oval shape, narrowing towards the east, the eastern part now completes the circle, with the reduction and rearrangement of some elements. At the same time, a wall was erected to the east of the memorial, inscribed as a memorial to the fallen of the Second World War.

In 2005 a separate memorial was erected to the north-east of the First World War memorial, commemorating the service men and women and the citizens of Portsmouth who lost their lives during the Second World War.

The City of Portsmouth War Memorial, unveiled in 1921, designed by J S Gibson and W S A Gordon, with sculpture by C S Jagger, is listed at Grade II* for the following principal reasons:
* Historic interest: paid for by public subscription, the memorial is an eloquent tribute to the servicemen and women of Portsmouth, and the sacrifices they made during the First World Wars;
* Architectural interest: the distinguished design combines a number of high-quality elements in a harmonious whole, creating a memorial of unusual dignity and power;
* Sculptural interest: the memorial’s accomplished and animated sculpture, by Charles Sargeant Jagger, exemplifies that distinguished artist’s ability to evoke the physical reality of war;
* Group value: the memorial forms part of a group with a number of listed buildings, including the late-C19 Guildhall, with the 1903 statue of Queen Victoria before it, and the University of Portsmouth Park Building, also of 1903; the registered Victoria Park is immediately to the north.