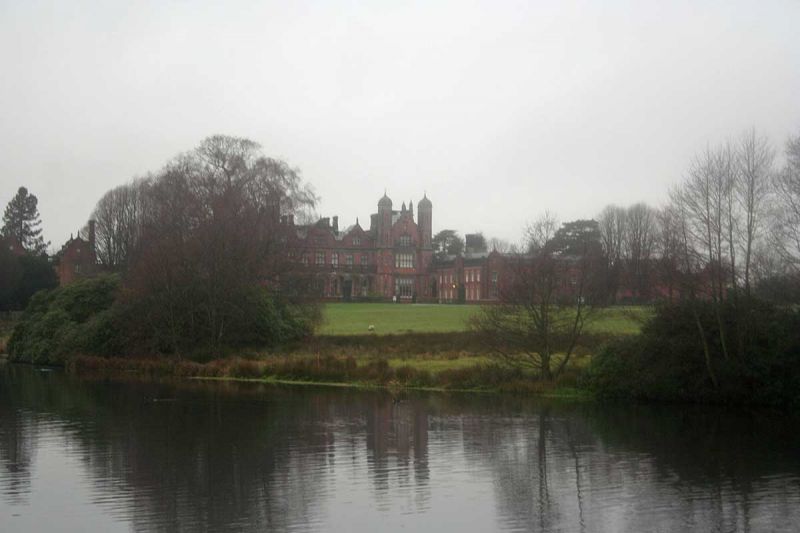 Country house. 1719, 1837-9 and 1862 - c1868. By William Smith of
Wergs, Edward Blore and Anthony Salvin. The first building of the
house had a central Palladian body with attached wings. These were
encased on the entrance front by Blore. A fire in 1861 destroyed the
central portion but left the wings untouched. Salvin rebuilt the
centre retaining some of Blore's features. Red Flemish bond brick
with ashlar dressings and slate roof. Three-storeyed central block
with cellars. Two storey blocks to sides. Entrance front: 7 central
bays. Basement area, above which is a raised ashlar colonnade
supported on segmental arches. This colonnade survives from Blore's
building and has Tuscan columns with raised circular panels to
spandrels and square diamond rustication to the keystones. The rest
of the central portion is by Salvin and has a central three-light
window with two mullions and two transoms with three windows to either
side of two lights with mullion and two transoms. First floor windows
in similar arrangement. Cornice above which are a central four light
mullioned window with three-light similar windows to each side set in
shaped gables with stone copings and finials and heraldic panels to
their apexes, the central one larger and projecting. Central platform
to roof with stone parapet. To either side of this central feature
are slightly projecting three-storey wings of one central bay with
lateral 4-storey square turrets, the left hand one of which is by
Blore and survived the fire of 1861. Canted two-storey central bay
windows. Pierced stone parapets above bay windows and 3-light
mullioned windows to second floor with shaped gables with pierced ogee
finials and stone copings. The lateral turrets have string courses
between floors, single lights and ogee caps with finials. All the
windows here, as elsewhere on the house, have ashlar surrounds. To
either side are projecting service wings. Courtyard facades similar
having two storey semi-circular arches with stone surrounds joining
them to the house, that to left blocked, that to right forming a porte
cochere. Each inner face is of 7 symmetrically disposed bays with
double ½ glazed doors set in a slightly projecting central bay with
fanlight over. Consoles to either side supporting oriel windows of 2
lights to first floor. Shaped gable above with single-light windows
and stone coping. To either side are three ground floor sash windows
of 3 x 5 panes with cavetto-moulded lintels. First floor windows of
3 x 3 sash panes with alternating pedimental and segmental heads and
shaped aprons. To the right of the right-hand block these surrounds
have been replaced with cement wedge lintels without aprons. Outer
facing fronts of these two blocks are essentially similar to the inner
faces. Save that the end bays project slightly and have 3-light
windows to the ground floor and 2-light windows to the first floor
with shaped gables above. Beyond these are two service court arches
projecting and joined to the house by pieces of blind walling.
Central semi-circular arches of 2 storeys height with pierced stone
parapet above and heraldic panel to centre. Projecting wings to
either side, each having 2-light windows to ground floor and 2-light
windows to the first floor. The ground slopes to the left allowing
for a third basement storey with similar fenestration to the ground
floor. To the left of this left hand wing is a row of gardener's
cottages of C18 or early C19.
Interior: Entrance Hall (By Blore): panelled ceiling with pendants.
Stained glass to bay window arranged by Willement. Fireplace of c1887
incorporating male and female terms formerly on the reading desk in
the Chapel of the Holy Trinity (q.v.).
Sculpture Gallery (By Blore): Arched flat-backed niches to sides of
corridor with panelled ceiling. Saloon (By Salvin): Panelled ceiling
and large fireplace with carved overmantel in early Renaissance style.
Drawing Room (By Salvin): Panelled ceiling with pendants and rich
floral frieze. State Dining Room (By Salvin): Panelled ceiling with
pendants, wooden panelling to dado line. Large white and variegate
marble fireplace of early Renaissance form. Staircase hall (By
Salvin): Divided from the sculpture gallery by three semi-circular
archways. Stairs have wrought iron balustrade with anthemions.
Similar arcade to first floor landings with blind arches to the wall
and three arched windows to external wall. Panelled ceiling with
scrafitto moulding. Library (By Salvin): imitation Jacobean
panelling with Jacobean fireplace brought from Marton Hall. Panelled
ceiling with diamond motifs. Study (By Salvin): Panelled ceiling
with circular central motif. Private Dining Room (By Salvin): C19
marble fireplace of C18 form. Ground floor bedroom (By Salvin):
Ceiling with octagonal coffers and Victorian-baroque fireplace.
Joined to the inner corners of the Service arch projections and
extending forward and across before the main facade is a low brick
wall of c.3 feet in height of Red English garden wall bond brick with
a chamfered and rusticated stone coping. Square stone piers to right
and left of centre with arched niches to all sides and recessed square
piers above with domed cap and felons' heads as finials. Pierced
stone walling to either side leading to central square stone gate
piers with pierced ogee finials above.

The Capesthorne estate has descended from the time of the conquest
through marriage from the de Capesthornes to the Wards and from them
to the Davenports.