A Grade II Listed Building in St. Giles in the Wood, Devon 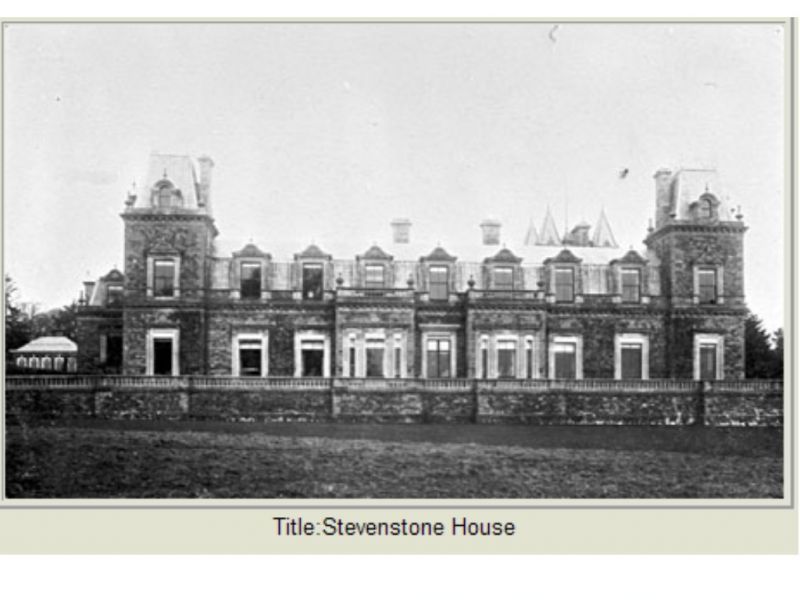 Ruins of mansion. 1872-73 by the Honourable Mark George Kerr Rolle on an ancient
site; reduced in size circa 1914; abandoned since circa 1945. Grey-coloured snecked
stone with with cream-coloured limestone detail, rendered brick internally ; brick
and stone stacks with snecked stone chimneyshafts with limestone coping; no roof,
formerly slate.
Plan: Ruined mansion. The entrance front faces east-north-east, say east. It is
said to be the original front rebuilt further back when the eastern half of the house
was done away with circa 1914. The interior walls have collapsed and are much
overgrown and therefore a description of the layout of rooms is not possible here.
Nevertheless it is clear than the principal rooms were those on the south and east
sides. Service rooms were increasingly concentrated in the north-western corner and
a service block connecting that corner, northwards and connecting to the service
courtyard (now called Stevestone Court), has been demolished. Formerly 2 storeys
with a basement.
Exterior: The ruined walls are very overgrown and rarely stand their full height. A
3-storey turret and stack stand high and relatively intact in the south-west corner
and a large projecting lateral stack dominates the east front. The windows have
limestone ashlar architraves and the most prominent have curvilinear pediments filled
with the carved Rolle arms. Eaves cornices and chimneyshaft cornice are limestone
modillion friezes. The east (entrance) front has an irregular 5-window front
interrupted by the projecting stack right of centre. The doorway is central. Partly
collapsed flight of steps to remains of stone ashlar shallow porch; external bands of
rusticated stone and panelled interior. The south front, overlooking the deer park,
has a 4-window front. The right end window here is a projecting bay window with very
large windows. According to the owner he has a pre- 1914 photograph showing this bay
window is central.
Interior has completely collapsed although here and there the walls are still
plastered and one room in the south-west corner has the remnants of a moulded plaster
cornice including a modillion frieze. All the carpentry, joinery and other fixtures
and fittings have been removed.
These are the ruins of the Rolle mansion whose occupants shaped the surrounding
landscape in the late C19. They were then the largest landowners in Devon and this
was one of their 2 major houses. The legacy of Mark George Kerr Rolle is imposed on
just about the whole parish of St Giles in the Wood.