A Grade I Listed Building in Sampford Courtenay, Devon 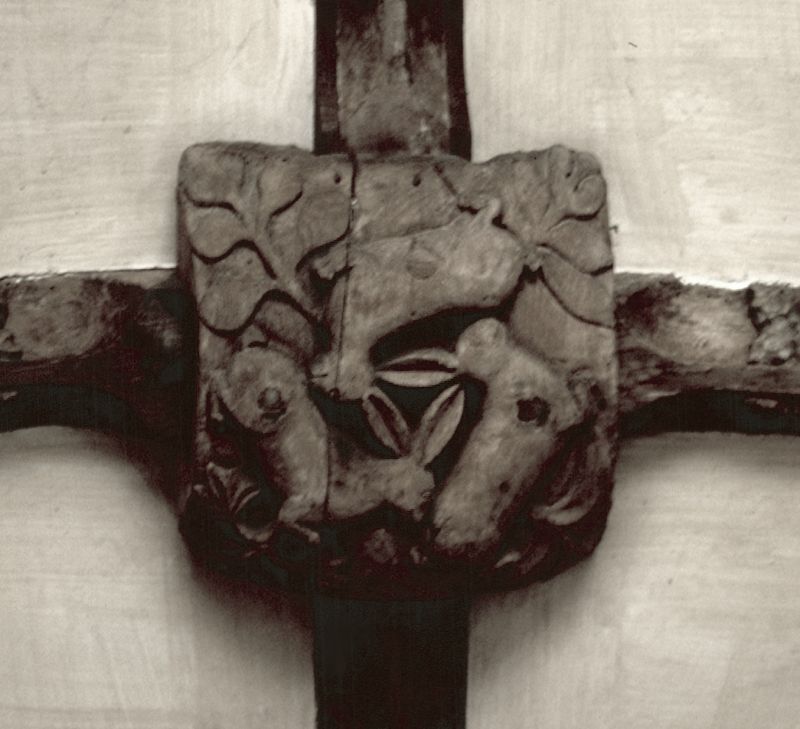 SAMPFORD COURTENAY SAMPFORD COURTENAY
SS 60 SW
11/172 Church of St. Andrew
22.2.67
GV I
Parish church. C15 and early C16 restored in l899. Granite ashlar walls to tower,
south aisle and porch, north aisle and chancel are of stone rubble. Gable ended
slate roof.
Plan: nave, chancel, north and south aisles, west tower and south porch. The
difference in stonework externally suggests 2 different building dates, as does the
differing form of the 2 arcades and probably the nave, chancel and north aisle pre-
date the south aisle. At which phase the tower was built is not entirely clear, its
stonework corresponds to that of the south aisle and porch and it may well have been
added as part of the high quality early C16 re-modelling. The date of the vestry at
the east end of the chancel is also uncertain, in style it resembles the south aisle
with its battlements but it could be a later addition in traditional style. In 1831
the rood screen was removed later to be partially reconstructed by Herbert Read of
Exeter. In 1899 a major restoration took place under the direction of G. Fellowes
Prynne when some new timbers were put in the roofs, the west gallery was removed and
new tracery was put in the south aisle windows.
Exterior: imposing 3 stage west tower, battlemented with crocketted pinnacles - set
back buttresses and moulded plinth. Large granite west doorway with 4-centred head,
richly moulded with quatrefoils in the spandrels. Heavily moulded square surround
with hoodmould above. 4-lignt Perpendicular west window with a row of quatrefoils
in panel below. 3-light belfry openings with simple tracery. On north side is
small ogee-headed light on 2nd stage. Slit lights for stairs adjoining front
buttress. North aisle has three 3-light early C16 tall granite mullion windows with
segmental heads and square hoodmoulds. Between the right-hand 2 is granite north
doorway, moulded with 4-centred nead. Rectangular projection for rood stair turret
between aisle and south chapel. 3-light Perpendicular window at east end of aisle
with renewed tracery. North side of chancel has similar smaller windows to aisle.
At east end of chancel is 1 storey battlemented vestry. 5-light east window of late
Perpendicular style with segmental heads and smaller lights above forming arch.
South aisle: is battlemented, its 3 most easterly windows are the same as on the
north aisle. Small priest's door has granite jamb and 2-centred arched red
sandstone bead. The remaining south aisle windows are completely restored in
Perpendicular style. Shallow buttresses between the windows. Crenellated 1 storey
south porch with set-back buttresses, moulded plinth and richly moulded 4-centred
doorway with arched hoodmould.
Interior: 2-centre arched granite south doorway with double roll and fillet
moulding. Possibly contemporary oak plant door in 2 parts with very large wooden
lock. Granite seats with chamfered soffits. Roof completely restored. The
internal walls have C20 render. 5 bay granite arcade on north side with double
chamfered 4-centred arches and Pevsner A-type piers. These have foliage carved
capitals apart from the most easterly arch which has moulded cup capitals. The
south arcade is of Polyphant stone for the first 3 bays but the 3 most easterly
moulded cup capitals. The Polyphant piers have 4-petal flower carving to their
capitals apart from the most easterly which is plain. Tall 4-centre moulded tower
arch with imposts. Small pointed arch granite doorway to stairs in south-west
corner.
The nave chancel and north aisle retain their medieval wagon roofs. Those to the
nave and chancel have carved 4 petal flower decoration to ribs and large carved
bosses of various designs. Carved wall plates in foliage or trailing vine designs.
Where timbers or bosses have been replaced in the 1899 restoration they are stained
darker to distinguish them from the old. The ceilure and timber arch over the nave-
chancel division and the carved angels below each rib to the chancel are late C19.
The north aisle has moulded ribs and smaller bosses. Above the south aisle is a
probably early C16 flat panelled ceiling with carved flowers to ribs and foliage or
floral bosses. The south chapel has a wagon roof similar to that of the north
aisle. Dividing it from the south aisle is the rebuilt C15 wooden screen which has
had substantial parts reconstructed although some of the outer framework still has
early green and red colouring to it.
Although a new pulpit was ordered by the rector in 1831 the existing mahogany pulpit
appears to be of Cl8 date though it has been put on an oak base.
C12 square tub font of Purbeck marble with arcading to sides on later octagonal
granite pedestal and case.
C18 marble wall memorial on south chapel wall to Rev. John Heath and his sister
Hannah who died 1772 and 1768.
This is an important medieval church with impressive exterior and a good interior.
Sources: Beatrix Cresswell - Churches in the Deanery of Okehampton, Church Guide.