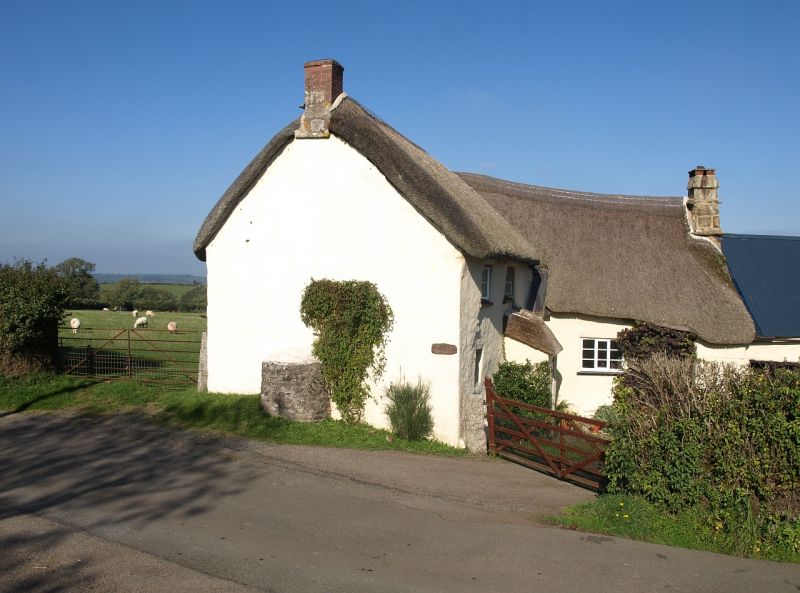 Farmhouse, former Dartmoor longhouse. Early C16 with major late C16 and C17
improvements including a late C17 parlour wing extension, modernised in mid C19.
Plastered granite stone rubble with some cob on the wall tops; granite stacks with
granite ashlar chimney shafts, one extended with C20 brick; thatch roof (replaced
with corrugated iron over the shippon).
Plan and development: L-shaped building. The original part is the main block. It
is a low 3-room-and-through-passage plan Dartmoor longhouse facing south-east and
built down the hillslope. At the uphill left (south-west) end an unheated inner
room is terraced into the hillslope. It is now a kitchen but was probably a dairy
formerly. The hall has an axial stack backing onto the passage. The end of the
shippon was demolished in the late C19 - early c20 when a barn was added onto the
end. In the late C17 a parlour wing was built at right angles in front and
overlapping the end of the inner room. At that time the hall became a kitchen and a
corridor was built through the inner room from the hall to the new parlour. Stair
from upper end of the hall and a C19 stair inserted into the parlour. The original
house was open to the roof from end to end, divided by low partitions and heated by
an open hearth fire. Through the C16 and C17 the hall stack was inserted and the
house was progressively floored over. Now 2 storeys throughout.
Exterior: The main front has a single ground floor C19 casement to the hall. To
right, beyond the oven projection is the passage front doorway containing a C19
plank door in a solid timber frame (rear passage doorway is smaller). To right of
this is the cow-door with a hayloft loading hatch directly above, and right of this
door is a ventilator slit. There is another opposite in the back wall. The inner
side of the parlour wing has a 2-window front of C19 casements with glazing bars and
includes a secondary C19 door. Both blocks are gable-ended.
Interior: preserves elements from all the major building phases. The hall
fireplace is partly-blocked but its massive size and plain granite ashlar surround
is evident; it was probably inserted in the late C16. At the upper end of the hall
the headbeam shows of an oak plank-and-muntin screen; maybe an original low
partition. The inner room was floored over in the late C16 and the chamber
oversailed the screen to produce an internal jetty. Since the framed crosswall of
the chamber is clean on the hall side it was probably built at the same time as the
hall fireplace was inserted. The hall was floored over sometime in the C17 with a
soffit-chamfered axial beam. The roof over the hall and inner room is the original.
True cruck trusses are suspected but the lower sections of both trusses are boxed
in. There is a hip cruck at the inner room end. The whole of this section
including the underside of the thatch is thoroughly smoke-blackened from the open
hearth fire. Over the passage there is a oak truss (again the lower parts are
hidden). This seems to be late C16 and built with the hall stack and it carries
another roof over the top of the original. The shippon crossbeam has been removed.
The parlour wing was modernised in the C19 and that carpentry detail which shows
including a plain solid doorframe from the inner room corridor. The fireplace here
is blocked.
This is an interesting and attractive farmhouse with good evidence for all phases of
its historic development.