A Grade I Listed Building in Holcombe Rogus, Devon 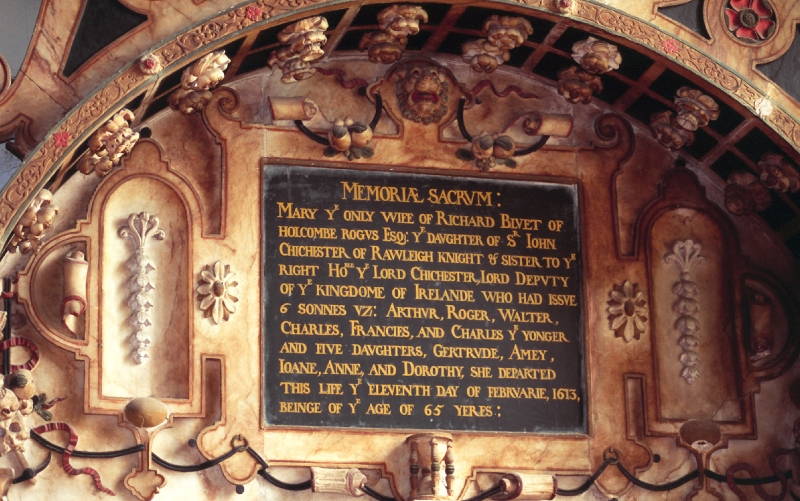 HOLCOMBE ROGUS HOLCOMBE ROGUS
ST 01 NE
5/114 Church of All Saints
-
5.4.66
GV I
Parish church. C15 but in 2 or 3 building phases, restored 1875-80 and vestry added
in 1898. Grey-coloured chert rubble laid to rough courses, some red sandstone and
purple-coloured volcanic trap ashlar used internally; mostly Hamstone and Beerstone
detail; slate roof.
Plan: nave and chancel under a continuous roof. North and south aisles both
overlap the chancel; the north side contains the Bluett chapel but the south aisle
chapel has now been converted to the organ loft. West tower with 1898 vestry off
the north side. South porch. Perpendicular style thoughout.
Exterior: tall west tower of 2 stages with set back buttresses and embattled
parapet. The stair turret projects square from the south-east corner. There are
carved gargoyle water spouts on all corners and the corners of the stair turret
parapet are carved with large faces. 2-light belfry windows with Perpendicular
tracery. West doorway is a 2-centred arch with moulded surround and above it a
restored 3-light window with Perpendicular tracery. The south porch, at the left
end of the aisle has diagonal buttresses and a Beerstone ashlar front containing a
Hamstone 2-centred outer arch with richly-moulded surround and hoodmould with
crudely carved human head label stops. Above a blind arcade with cusping and
soffit-moulded cornice. Inside a good Beerstone fan vault with carved bosses, some
featuring the Tudor Rose. The south doorway is a moulded Tudor arch with carved
foliate spandrels and hoodmould. It contains an ancient studded plank door with
moulded coverstrips. Both aisles and chancel have set back corner buttresses but
south aisle has a Beers tone coping to a low parapet and this is carried round the
rood stair turret which projects square. Most of the windows have been restored.
Nevetheless south aisle and chancel have similar Beerstone windows, some with recut
carved human head label stops. Most are 2 lights but the east chancel window is 4
lights. The north aisle windows are Hamstone and these have a different style of
tracery and Tudor arch heads.
Good interior: nave and chancel have a continuous wagon roof. That in the nave was
plastered over in the C19 but C15 carpentry is thought to survive here. The chancel
roof is a C19 rebuild with new carved bosses and boarded back. However both aisles
have good C15 wagon roofs. Although both have moulded ribs and purlins and good
carved oak bosses they are different in character. The south one is ceiled and has
a plain wall plate. The north one is now open and it has a richly-carved wall plate
with crestwork and there are carved oak angels holding shields under each main
truss. The tower has a C19 ringing floor. Tall plain tower arch with triple-
chamfered arch ring. No chancel arch although the arcades are interrupted at this
point and the wider space between the piers has Beerstone Perpendicular panelling.
Each side of the nave are 4-bay Beerstone arcades. Both sets of piers are moulded
Pevsners B-type but the arcade characters are different. The south aisle arcade,
probably the earlier, has moulded caps to the shafts only (more Somerset in
character) whereas the north aisle arcade has carved capitals (more Devon in
character). The western-most arch of the south arcade (in from the doorway)
includes a couple of carved royal? heads and the pier has an image niche. The rood
stair is open and complete. The inner arches of the windows are moulded Beerstone
but the walls are otherwise plastered. Floor of patterned C19 tiles in the nave and
aisles also including some good black marble graveslabs of C17 and C18 date. The
Bluett Chapel is completely floored with graveslabs. C19 encaustic tiles are
included in the chancel, the most ornamental ones reserved for the sanctuary.
Late C19 carved Beerstone reredos enriched with marble and Gothic in style.
Contemporary piscina nearby in north wall. Late C19 altar rail on twisted brass
standards, oak stalls in Gothic style with poppyhead finials, oak pulpit and
lectern, plain pine benches with children's pews to rear, and Beerstone font richly
carved in Perpendicular style.
The Bluett chapel is enclosed by reused sections of a good C15 oak rood or chapel
screen; panelled wainscotting Perpendicular tracery (Pevsner's type B) and
delicately-carved frieze. This, known as the Walrond Screen, was rescued from
Tiverton Church and removed here in 1854. Nothing remains of the rood screen
belonging to this church except for a couple of panels incorporated into the Bluett
pew. This Bluett family pew is a most remarkable example of early C17
craftsmanship. It is much restored but the form is that of the original. Built of
oak it comprises small field panelled wainscotting below richly carved arcade with a
crest incorporating 10 medallions carved with scenes from Genesis and Exodus.
Memorials: the church contains a notable group of monuments, the best belonging to
members of the Bluett family. The oldest are the 2 in the Bluett Chapel. One in
memory of Richard and Mary Bluett (d. 1614 and 1613) is marble and depicts Richard
reclining on one elbow above the figure of his wife. The other, larger and more
classical commemorates Sir John Bluett (d. 1634) in armour and his wife Elizabeth
(d. 1636) and at the base are the carved figures of their 8 daughters.
Alongside in the north aisle a polychrome marble mural monument in memory of the
Reverend Robert Bluett (d. 1749) which shows a bas relief of the Good Samaritan with
a large urn above. In the chancel another large marble mural monument featuring 2
allegories sitting each end of a sarcophagus and vase. It was erected in 1783 and
commemorates Robert and Kerenhappuch Bluett and outlines the history of their family
but gives no dates. Other good Beerstone and marble mural monuments from the C18.
Some late C19 stained glass and some earlier fragments in the tracery of the east
window of the south aisle.
Source: Devon SMR. Andrew Gabriel and Barbara Fletcher, A Short History of
Holcombe Regis (1986).