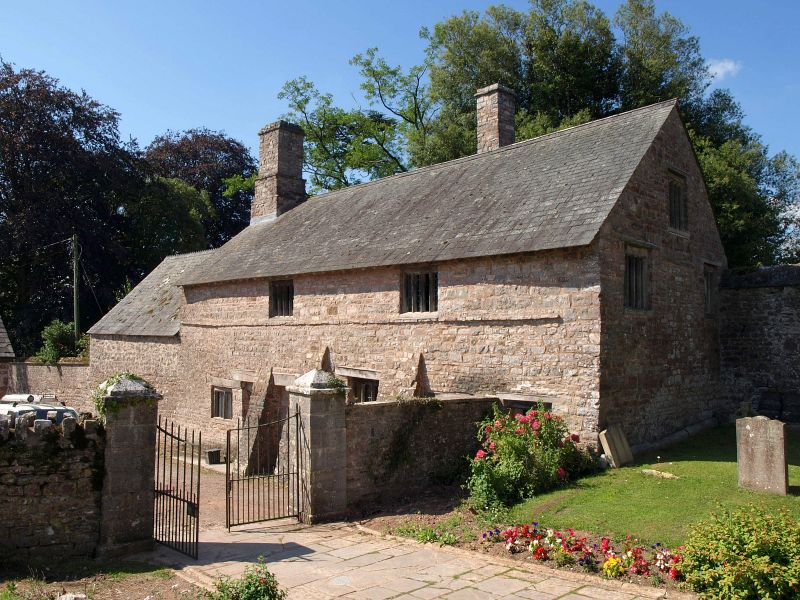 HOLCOMBE ROGUS HOLCOMBE ROGUS
ST 01 NE
5/121 The Priest House
-
GV II*
Former church house. Early or mid C16, C19 stable extension, carefully restored by
the Landmark Trust circa 1984. Exposed local rubble stone rubble; stone rubble
stacks with stone rubble chimneyshafts; slate roof, formerly thatch.
Plan: 3-room plan house facing north-east onto the lane from Fore Street to the
Church of All Saints (q.v). In fact the right (north-west) end intrudes into the
churchyard and the house backs onto the grounds of Holcombe Court (q.v). The centre
room has a projecting rear lateral stack and the left end room has a gable-end stack
backing onto the C19 stable extension. The building has been much altered over the
centuries, much of this due to periods of neglect, but it is therefore difficult to
determine the precise layout and any development.
It is 2 storeys.
Exterior: irregular front fenestration with 4 ground floor and 2 first floor
windows, all oak-framed with chamfered mullions and containing rectangular panes of
leaded glass. Most are C20 replacements and even those which incorporate C16 or C17
work have been heavily restored. The present front door is left of centre and
contains an old (but not original) plain oak frame and C20 plank door. There is a
another doorway now blocked alongside this one to right (the other side of one of
the 3 C20 stone rubble buttresses) and it is not known which if either of these
doorways is the original. There is a plain dripcourse across the front below the
first floor windows. The roof is gable-ended dropping down in level to the C19
stable extension which has a blind front wall. The right gable-end wall (onto the
churchyard) has a blocked first floor doorway. The windows this end and those to
rear are similar to those on the front.
Interior: was not available for inspection at the time of this survey.
Nevertheless it is clear that it was thoroughly and carefully restored circa 1984.
The ground floor oak plank-and-muntin partitions have been rebuilt on the evidence
of their surviving headbeams. Similarly the ceiling timbers have much new oak let
into them. The outer rooms have soffit-chamfered axial beams and the centre one has
a 4-panel ceiling of moulded intersecting beams. Both fireplaces have oak lintels,
the left room one across the full width of the room; it is reputed to be the largest
fireplace in Devon. According to previous reports the roof is carried on 4 clean
side-pegged jointed crucks, the left (south-eastern) one filled with wattle and
daub. This is a well-restored building which occupies a prominent position amongst a
group of listed buildings which includes Holcombe Court (q.v) and the church of All Saints
(q.v).
Sources: Commander E H D Williams, manuscript notes with ground plan with NMR.
G W Copeland, Devonshire Church - Houses, Part I, Trans. Devon Assoc 92 (1960) P127.