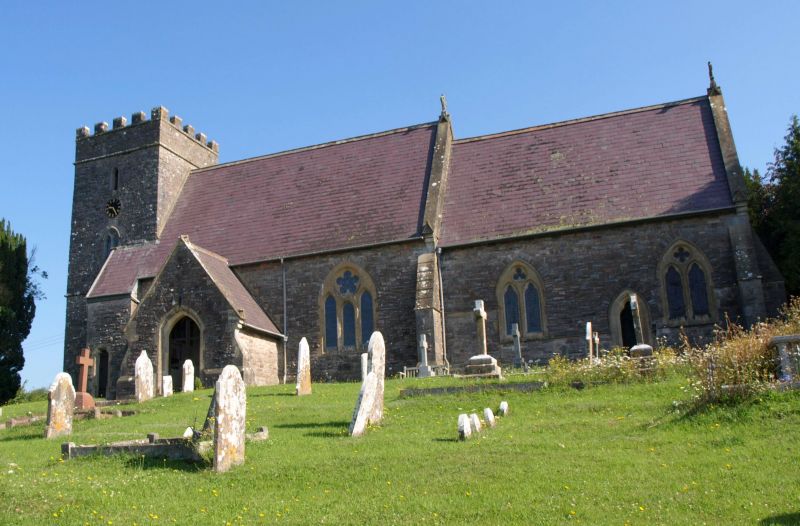 HOCKWORTHY HOCKWORTHY
ST 01 NW
4/78 Church of St Simon and St Jude
-
5.4.66
GV II*
Small parish church. Norman font. The tower is probably C15 but was heavily
restored 1848, the rest was rebuilt in 1865 by the young architect Charles Durnford
Greenway. Local chert stone rubble to the tower, the rest of the same stone but
snecked; limestone detail; slate roof.
Plan: nave with lower and narrower chancel, north aisle, south porch and west
tower. Vestry on north side of chancel. In the C19 the tower was converted to the
baptistry.
The style is a mixture of Early English and Early Decorated.
Exterior: plain unbuttressed tower of 2 stages with embattled parapet. The belfry
windows are lancets and the west window is 2 lights with Perpendicular tracery and a
hoodmould. C19 stair turret only to the ringing floor projects square from south
side with an external shoulder-headed doorway. The rest of the church is in the
same style with plate tracery windows. The south porch is gabled with a 2-centred
outer arch and south doorway is a similar smaller version.
Interior: dates from 1865. Nave and aisle have tall open scissor-braced common
rafter truss roofs. The chancel is also open and has arch-braced common rafter
trusses. Plain tower arch to the baptistry. Chancel has a double-chamfered arch
ring springing from moulded imposts. The 3-bay arcade has marble piers with moulded
limestone capitals. The walls are plastered. The floor is a chequer pattern of red
anti black tiles and some encaustic tiles, including some representing the
Evangelists, are included in the sanctuary.
The Beerstone reredos is a blind Early English style arcade enriched with some
marble. To left a trefoil-headed piscina. Oak altar rail on twisted wrought iron
standards. Pine stalls. Beerstone reading desk and pulpit, the latter on a marble
stem. Both have good brass fittings. C19 pine box pews. Simple font of circa
1200; built of volcanic it has a cushion bowl which has since been planed down.
Cylindical shaft and C19 square plinth. C17 oak chest.
No memorials. Painted Commandment boards flank the tower arch. C19 stained glass
in chancel.