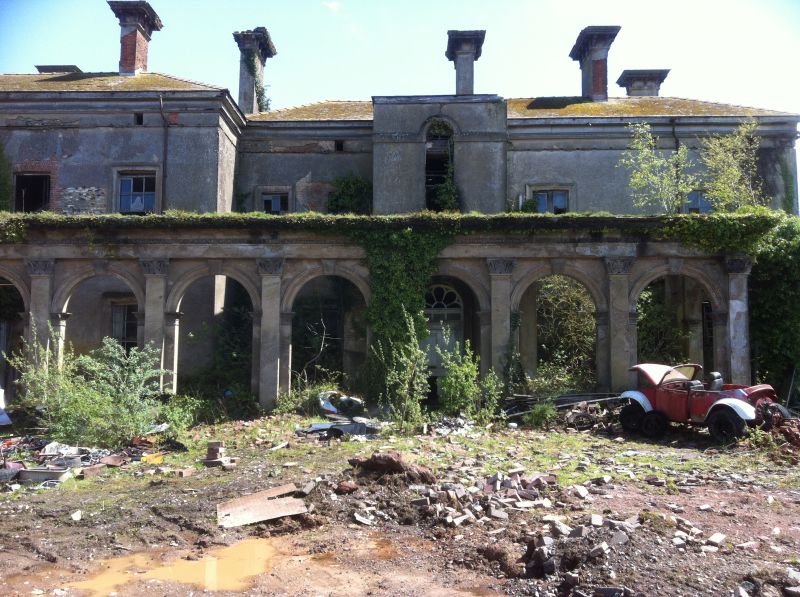 ST OO NE KENTISBEARE BLACKBOROUGH
8/93 Blackborough House
-
- II
Substantial country house. Built 1838-40 for George Francis Wyndham, Earl of
Egremont to designs by James Thomas Knowles, senior. Stuccoed brick, with stone
dressings; hipped slate roofs with red ridge tiles.
An unusual plan dictated by peculiar family factors that resulted in its being built
in 2 almost identical halves, each self-contained, one half occupied by the Earl of
Egremont, being placed back to back with the other half occupied by the rector of
Blackborough, another member of the Wyndham family. The building comprises a square
block containing the principal rooms of the two households and surrounded on 3 sides
by an open loggia, and with a lateral entrance tower containing stairs on either
side affording separate access to the 2 dwellings; to the rear of this block are 2
service wings flanking a courtyard. The building has undergone considerable
alteration, principally the dismantling of the top stage of both of the entrance
towers, and the demolition of some of the central rooms. Much of it was in a semi-
derelict state at the time of the resurvey visit (September 1985). 2 storeys
throughout, with attic.
Exterior: Loggia surrounds 3 sides of the building, the south-west front of 9 bays,
the side elevations of 11, it has lost its roof, and the 5 north-east bays of the
south-east front are filled with sash windows. Composite pilasters, round-headed
arches with vermiculated hempstone, moulded capitals, egg and dart frieze below
moulded cornices. Where the windows survive they are hornless sashes. All windows
with moulded architraves. Garret accommodation lit by small square windows, rather
like gunports.
Interior not inspected. It once contained a suite of rooms built to resemble
cabins of the Earl of Egremont's sloop.