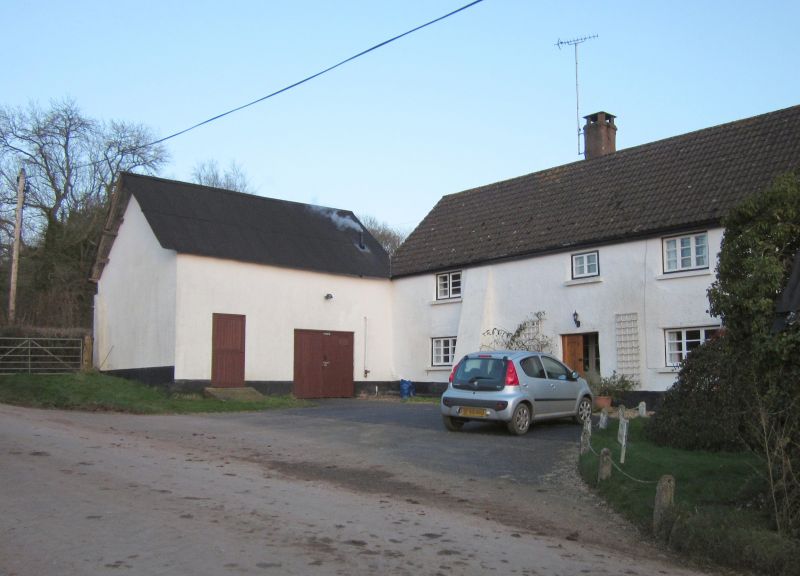 ST OO NE KENTISBEARE
8/87 Pool House
-
II
Detached house, formerly a farmhouse. Probably late C15 or early C16, completely
remodelled in the C17 with later alterations. Roughcast cob and stone; gable end
pantiled roof.
Plan: The medieval house was almost certainly a 3-room, through-passage plan house;
the medieval roof of jointed cruck construction survives; the hall and passage
(occupying 2 bays) were originally open to the roof, and the timbers here are smoke-
blackened; the service end (probably of 2 bays) and the inner room (originally
probably of one) were either of 2 storeys or unheated (or both). The cruck trusses
over the hall are of a different construction from the others; with chamfered arched
braces, and this probably reflects the greater importance of the room, rather than
different builds. The hall and passage are divided from the service end by a
plaster and wattle partition that rises through the entire height, closing the truss
into which it is attached, which - unusually - is a collar rafter truss (not a
jointed cruck), and which is smoke-blackened (like the infil) to the hall side only.
Unlike most cases where later generations respected the tradition of the 3-room,
through passage plan, the C17 owners of Pool appear to have imposed a 2-room,
through-passage plan on the existing structure. Presumably for reasons of
structural stability the hall stack was inserted adjacent to the central jointed
cruck truss of the hall, and backing onto an exceptionally wide passage, the lower
end side of which corresponds to the closed truss described above. Part of the old
hall and an extended inner room form a single room to the left, with a long service
end to the right. At the same time an unheated wing was added to the rear of the
service end, and a barn set forward of the house but connected to the gable end of
the left-hand room. Axial stack, and internal service-end (right-hand) end stack. 2
storeys.
Exterior Front: 4 window range, 2 and 3 light casement windows to first floor, 2
and 3 light casement windows to ground floor, C19 and later left hand end with no
windows and brick gable wall. C20 lean-to attached to right hand end. Rear: 2 and
3 light casement windows, largely C19 but in the case of the rear wing end ground
floor 2-light window occupying a C17 embrasure which retains its cyma recta moulded
lintel (visible internally). The service-end windows (3-light casement to first
floor, 4-light to ground) are possibly set in early embrasures.
Interior: Left hand room, axial ceiling beam, chamfered with eroded stops and a
sort of keystone carved in the timber at its centre.
Fireplace of random rubble with chamfered timber lintel with eroded stops. Right-
hand room with 3 cross ceiling beams, all chamfered with hollow step stops, one
resting on a post. Rear wing: roughly chamfered cross ceiling beam; rear window
lintel as described above.
Roof: 3 hall trusses, with yoke, and chamfered arched braces, the lower blades of
the arch brace cut out of the same timber as the lower blade of the truss, the upper
ones morticed. Diagonal ridge piece throughout; cranked collars. The central truss
to the former hall has lost its lower rear blade which rests now on a turned debased
Ionic column, visible in the present bathroom, and inserted in the C17.