Church of St Peter the Apostle 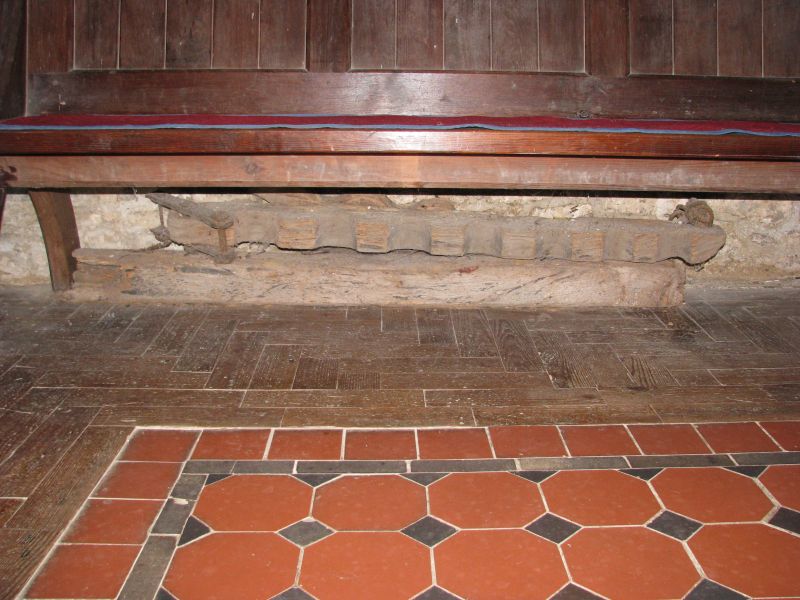 Parish church. C12 core, C13 south aisle, much rebuilt in C15 and early C16, major
restorations of 1850-3 and 1907-12, and chancel roof restored in 1965. The nave of
random local stone rubble; the rest is mostly local mudstone including some granite
and volcanic trap and tending to rough courses; porch includes many larger blocks of
red or purple coloured mudstone and grey granite; granite dressings and detail, both
original and restoration, otherwise Bathstone restoration detail; slate roofs.
Plan comprises nave and lower chancel on a slightly different axis, north transept,
south aisle, west tower and south porch. Decorated and Perpendicular styles.
West tower is probably late C15-early C16 but all detail is C19 replacement granite
including most of the weatherings on the buttresses and the coping of the parapet.
It is low (once apparently it was higher), 2 stages, with low diagonal buttresses
and embattled parapet. Internal stair turret. The belfry has twin lancet windows
each side and south side has a slit window to the ringing loft. On the west side of
the tower is a 2-centred arch doorway containing a C19 door with distinctive
wrought-iron strap hinges, and above it a 2-light window with Decorated style
tracery. The large iron openwork clockface on the south side of the tower was
erected in 1912.
The south aisle is probably C13 according to some original Decorated-style granite
tracery exposed inside. However all the present windows are C19 Bathstone
replacements but set in the original embrasures with granite sills, reveals and
hoodmoulds. Both gable ends include 3-light windows; the west one has
Perpendicular-style tracery, the east one has Decorated-style tracery. The south
front is 4 bays between diagonal buttresses. The porch, left of centre, is probably
early C16 and the south door is blocking a window which retains its original
Decorated tracery inside and some of the hoodmould shows outside. All the windows
are 2 lights; that to left of the porch has Perpendicular-style tracery, and the 2
to right have Decorated style tracery and are separated by a buttress. There is a
soffit-chamfered granite wall plate. The porch is gable-ended with a late C15-early
C16 2-centred granite outer arch with moulded surround and hoodmould.
The south side of the chancel has a possibly late C15-early C16 granite priests
door; it is tiny with 4-centred arch cut from a single slab. To right is a C19
Bathstone trefoil-headed lancet. The east gable end has a large C19 Bathstone 3-
light window with Decorated-style tracery and a moulded hood with carved medieval
king and queens head labels. There is the C19 vestry against the north side which
contains a Bathstone 2-light window with Decorated-style tracery and moulded hood
with scroll labels. The gable end of the north transept and the north side of the
aisle both include a C19 Bathstone Decorated-style 2-light window.
Interior: the south doorway is an early C16 granite 2-centred arch with moulded
surround and ramshead stops. It contains a good C18 fielded panel door. Inside the
door can be seen to block a C13 window and some of its tracery is exposed. The
blind embrasure now contains a list of former rectors.
The nave has a much-restored open C15 barrel-vaulted roof. The chancel, transept
and aisle have ceiled barrel vaults of unknown date. All the roofs have probably
early C20 wall plates. Tall plain tower arch with simple imposts. No chancel arch.
C15 or early C16 granite arcade of 4 bays with 1 overlapping the chancel. The piers
are moulded (Pevsner's Type A) with caps to the shafts only. The windows of the
south aisle have their original hollow-chamfered inner arches. The east window of
the chancel is flanked by Bathstone half-engaged shafts with carved foliate caps and
an internal moulded hood with the labels carved as a medieval king and queens heads.
The floor, laid in 1913, is of plain tile but includes panels of encaustic tile in
the chancel near the altar. Circa 1965 the floor of the south chapel was paved.
Nearly all the fittings are circa 1913 including the oak altar rail on twisted
standards, the deal stalls and benches, and the chancel screen and parclose (oak
linenfold wainscotting with wrought-ironwork above). The oak drum pulpit is a First
World War Memorial. The font however is Norman; it is a bucket font of purple
basalt with a fillet around the rim of which the lower half is carved to a zigzag.
It is encircled halfway down by a projecting broad cable. It has a restored late
C17-early C18 oak ogee cover surmounted by a plaster 'dove'. It has broken off and
lies on the nearby window-shelf. The font was reinstated in 1853 after being found
in the graveyard and set on a piece of limestone also dug up but in 1912. Near the
font are some old pieces of oak; the remains of the village stocks and a couple of
pieces of chip-carved oak board found during the restoration of the roof.
The mural memorials are marble but plain; on the south wall in memory of Mary Snell-
Hill (died 1845) with a triangular top end enriched with a band of guilloche; and on
the north wall in memory of Joseph Arscot (died 1823) with a moulded cornice and
drapery and apparently missing a triangular pediment. The glass is probably the
most interesting feature of the church. The east window of the chancel has good
(though faded) glass by Hardman, dated 1851. The south window of the chancel is
also mid C19 and includes an interesting monochrome representation of the Virgin and
Child designed by Francis Wilson Ollifant and made by Clayton and Bell.
The east end of the aisle has attractive patterned glass by Drake and most of the
rest is good quality early C20 stained glass also by Drake.
Source: Devon SMR. C19 Church Project. Rev JWG Godeck, Church Guide, (1977).