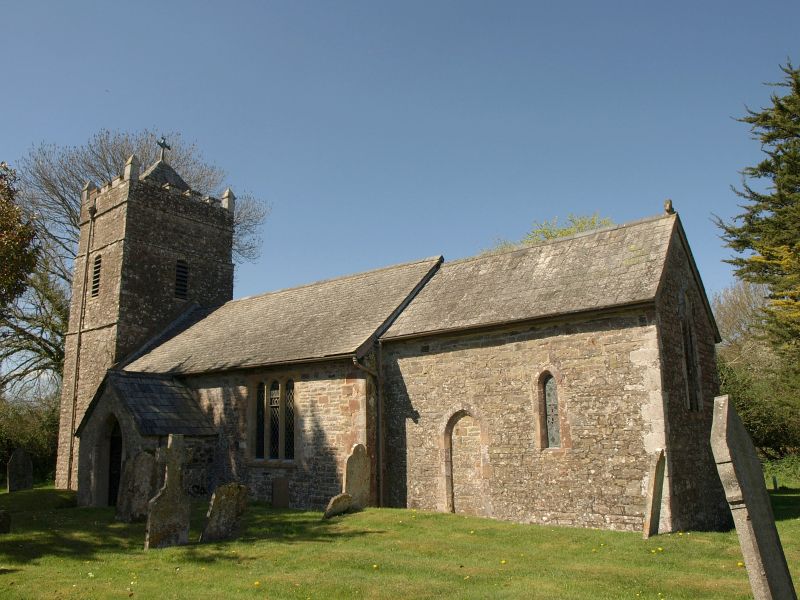 Parish Church. Tower and chancel C14, north aisle C15; all thoroughly renovated
1847-8. Red sandstone, volcanic and mudstone rubble with Beerstone, Hamstone and red
sandstone ashlar detail; slate roofs. Nave with narrower and slightly lower
chancel, north aisle, west tower and south porch. Mostly restored late
Perpendicular. Low unbuttressed west tower in 2 stages with embattled parapet and
small pinnacles and dwarf pyramidal roof surmounted by C20 brass moline cross.
Segmental arches over belfry windows are restored with C19 brick. On west side of
tower C19 segmental arch has contemporary plank door with unusual wrought iron strap
hinges. The south side of nave was apparently largely rebuilt in mid C19 and
includes 4 Hamstone square-headed windows in C16 style; square-headed with round-
headed lights; two 2-light left of porch and two 3-light to right. Gable-ended
south porch has 2-centred arch of red sandstone and Beer stone. The right (east) end
of nave has large red sandstone quoins and part of a chamfered plinth, probably C15
work. The fabric of the chancel is rubble tending to courses and some may be C14.
It includes the blocked pointed arch of the priest's door and to the right a narrow
lancet, both of volcanic ashlar. The red sandstone quoins and east chancel window
(2-light Perpendicular with ogee heads and trefoil cusping) are mid C19 restorations.
Similar 3-light window in east end of north aisle. On north side the 2 square-headed
volcanic windows with elliptical-headed lights may be C15.
Interior: Almost round-headed south doorway containing a C17 plank door with moulded
cover strips restored in C19. Nave has C19 plaster barrel vault ceiling with a
crenellated wall plate; north aisle has much restored wagon roof but many of the
carved oak bosses are original C15; and chancel has an ornate wagon roof which though
restored retains much original C16 carving and carpentry. It has moulded ribs and
intersecting straight windbraces with carved flat bosses and a carved fernleaf wall
plate. Low, almost round-headed tower arch with plain volcanic voussoirs. 4-bay
arcade, 3 to nave and 1 to chancel, of whitewashed ashlar. The moulded piers
(Pevsners A Type) have plain caps only to the attached columns. The arches are low
and broad and are part of the 1848 renovation as too is the double chancel arch. C19
parquee floor includes one memorial slab to Amas Blagg (died 1732). The sanctuary
lancet window is filled with fragments of ancient stained glass including a crown, a
Tudor rose and grissaille. Hollow-chamfered rear arch to east chancel window which
includes stained glass of 1860. The fittings and furnishings are all Victorian
Gothick although vestry screen appears to include a length of C16 carved oak cornice
possibly from a rood screen. Brass lectern dated 1894. The Beer stone font bowl is
good C15 work decorated with quatrefoils on panels with a band of foliage ornament
underneath, but is set on C19 pedestal.