A Grade I Listed Building in Ashprington, Devon 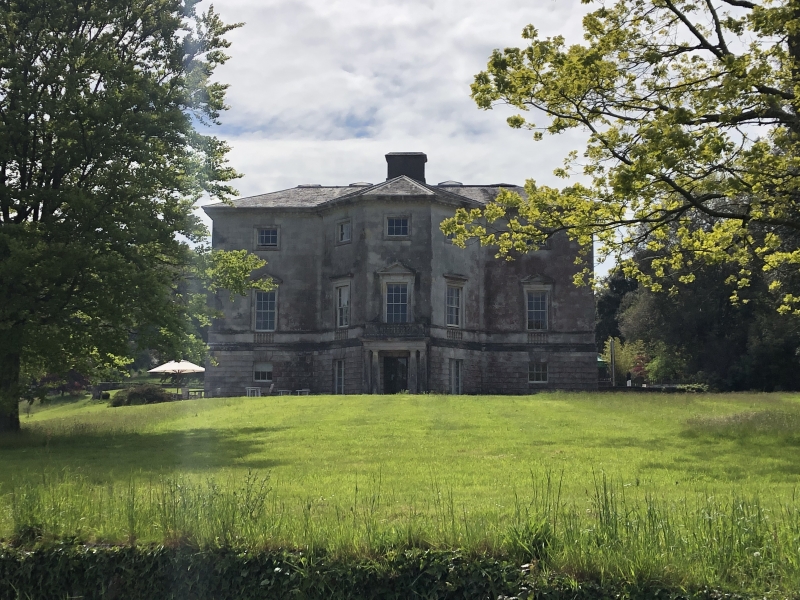 Country House. Circa 1770 by Sir Robert Taylor for Captain Philemon Pownall,
continued by Pownall's daughter Jane after 1780s and completed in 1824 by his
grandson John Bastard. Remains of an earlier house are said to exist
incorporated at the back. Ashlar with rusticated ground floor slate hipped
roof with lead rolls to ridge and hips. Rendered central axial stack.
Plan and development: In 1770 Taylor built a Palladian villa onto an earlier
house, depicted in a survey illustration of 1749. The old house was
presumably used as the rear (west) service wing for the new house since the
new addition has no piano nobile over flanking wings to accommodate the
services. It is entered on the ground floor through a canted bay at the
front into an octagonal entrance hall which leads to a wide oval stair well
behind flanked by a dining room on the right and library on the left all
contained in a shallow rectangular plan. Pownall died in 1780 but work
continued and it might have been then that the plan was deepened by 3 bays on
the south side and 2 bays on the north side absorbing move of the earlier
house at the back, the remaining evidence of which is only the thick walls of
the irregular plan and a reused Tudor doorframe and mullion window. The 3-
storey 2-bay range to the west of the south front right incorporate earlier
work as it could be entirely early C19 as building continued until about 1824.
The lower wings to left and right at the back are late C19 additions and
contained a laundry and other services including a coachhouse but were
converted into two separate dwellings in the late C20.
Exterior: 3 storeys, attic and cellar under part. Rusticated ground floor,
string at first floor all level and stone modillion eaves cornice. Astylar
elevations. The east front of 1:3:1 bays, the centre a wide full-height canted
bay with a Roman Doric portico with paved columns and a balustrade to the
balcony alcove. Tall first floor windows all have apron balustrades and
alternately are with and without triangular pediments. The small square
second floor windows have moulded architraves. The rusticated ground floor
also has small square windows but most now have lower sills. The north and
south returns are similar but without the canted bay, both originally 3 bays,
the north increased by 2 and the south by 3 more bays. 12-pane sashes on the
first floor, 6-pane on second floor and ground floor windows are now mostly
garden casements.
Rear elevation has 3-window centre with 12-pane sashes,set back on left with
modillion cornice and wing on sight with porch in the angle which has a roll-
moulded Tudor arch stone doorway with monchettes in the spandrels, moulded
stone 2-light window with a hoodmould and a round-headed sash above. Low
service wings to right and left of rear courtyard, the left hand with wooden
cupola over roof.
Interior: Very fine interior retains most of its C18 features. The octagonal
entrance hall which fits into and is entered through the canted bay at the
front has a colonnade of 8 Roman Doric columns inside and a compass design in
the floor. Behind the entrance hall is the oval stair-well with niches in the
walls, rising the full height of the house to a coffered dome and lantern and
with an exceptionally fine cantilevered staircase with a plain stick
balustrade incorporating monoframes on the landings. On the ground floor the
library has small panels attributed to Angelica Kauffman and classically
decorated bookcases. On the first floor the drawing room has figurative
medallions, plaques and garlands and a marble chimney-piece. The octagonal
saloon also has a fine marble chimney piece with a carved plaque said to be
reminiscent of Henry Cheere, but Regency panels have been superimposed on the
walls. The principal bedchamber has a coved ceiling with Regency decoration
and an early Cl9 white marble chimneypiece. On the second floor 2 groin-
vaulted lobbies off the landing and a pair of oval rooms over the octagonal
saloon with oval vestibules in the spaces between. Most of the C18 joinery,
plasterwork and chimneypieces are intact, including the original servants
staircase but there are some early C19 chimneypieces and reeded ceiling
boarders. At the back the former laundry and service wings have late C19
arch-braced timber roofs.
Historical Note: Sharpham was once the property of the Yarde family of
Bradley. It was bought by Philip Cockey in 1748 as a speculation for the
timber on the estate rather that for the old house. In 1765 Captain Philemon
Pownall bought the estate and in circa 1770 employed Sir Robert Taylor to
rebuild the house with a fortune of £64,963 acquired from the capture in 1762
of the Spanish galleon Ermiona in the Seven Years War.
SOURCES: Marcus Binney, Country Life, 17th and 24th April, 1969.