A Grade I Listed Building in Whitwell, Derbyshire 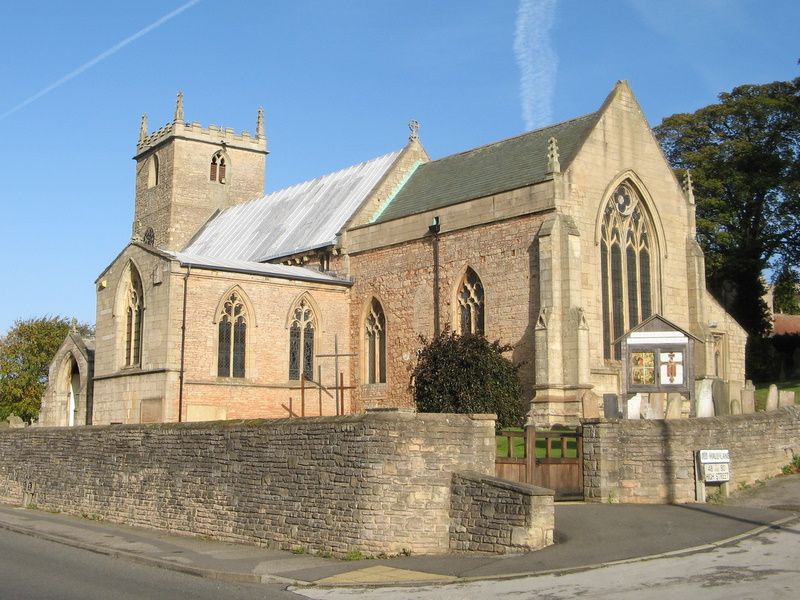 Tower of two stages divided by a set-off. To the east embraced by the nave and with low diagonal buttresses to west. On the south side the lower stage has a tiny round-arched window, a small plain rectangular window and a circular clock face. To the west a C12 doorway with one order of colonnettes, leaf capitals and zigzag in the arch. Panelled door with decorative ironwork. C12 round-arched window above, with hoodmould. The lower stage to the north is blind. Two-light bell-openings with cusped tracery, on all four sides. Battlements and four crocketted pinnacles. Lean-to north aisle with plain parapet. Flat-arched window to west with two round-arched lights. The north elevation has three three-light segment-pointed arched windows with cusped lights. Two plain round-arched C12 clerestory windows and a heavy corbel table.

Gabled north transept with broad buttress-thickening to the west wall. Decorated three-light north window with cusped tracery, and a two-light Decorated east window. Gabled north chapel has a rose window with reticulation units to the east. To the north is a low flat-roofed vestry with plain parapets. North window of 1-3-1 lights. Cusped ogee lights and blind tracery dividing the outer lights from the centre. Second lean-to vestry has a flat-arched two-light east window with a reticulation unit. The chancel has a large four-light east window with geometrical tracery. Three incised grave stones set in the wall below the window. Angle buttresses with two set-offs, the lower ones gabletted on the south east corner. The south side of the chancel has a large two-light window with un-encircled quatrefoils. To the left a plain chamfered priest's doorway with returned hoodmould. Blind lancet above. To the left again is a similar but smaller two-light window.

Gabled south transept has to the east two two-light Decorated windows with flowing tracery. Three-light south window with flowing tracery A sundial set high up to the right. The south aisle has one three-light segment headed window with cusped lancets and returned hoodmould. Plain parapet. Three C12 round-arched clerestory windows and a bold corbel table. To the east of the transept is a two-light clerestory window. To the left of the porch is a three-light window with four-centred arch and deep reveals. C12 round-arched window at the west end of the aisle. Deeply projecting gabled south porch with angle buttresses. Double-chamfered porch entrance with semi-octagonal responds. Cross finial. Depressed round-arched south doorway has a studded plank door with decorative iron hinges.

INTERIOR: four bay north and south arcades have plain, stepped round arches and circular piers and capitals. Keeled responds to the east and plain square responds to the west, with scalloped capitals to the north west respond. Double-chamfered pointed arches from the aisles into the transepts, on moulded corbels. Plain round-arched tower arch, now blocked and with an early C20 blind screen. A further clerestory window on each side looks into the transepts. Richly moulded C12 chancel arch with tripartite keeled responds, waterleaf and scalloped, capitals and finely detailed arch mouldings, i.e. a Transitional piece. Upper rood doorway to the left.

The north transept has an east window, now internal, similar to the window on the left. The north wall has a large cusped ogee tomb recess with finials. The west wall has a monument to Roger Manners, died 1632. A standing wall monument with recumbent effigy in armour under a shallow arch between two black columns. The south transept has a C20 parclose screen. Ogee headed piscina set low down. Plain tub-shaped circular font. The chancel has an arch to the organ chamber, dying into the imposts. Two plainly chamfered pointed-arched north doorways, one of them C19. Traceried north piscina with crocketted gable. Ogee-arched south piscina and elaborate pair of sedilia, with openwork cusping, ogee elements, steep gables and much crocketing. Medieval stained glass in the north transept east windows.