A Grade I Listed Building in Hathersage, Derbyshire 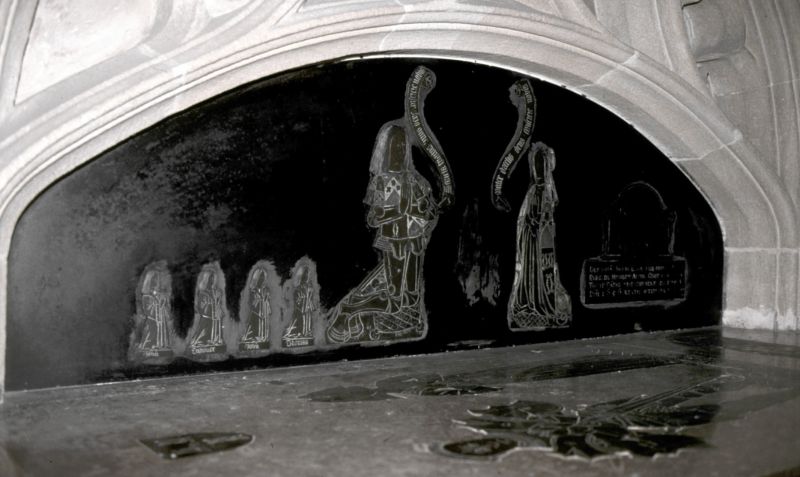 Church of England Parish: Hathersage St Michael and All Angels

GV
I
Church. Principally C14 and C15, restored by Butterfield 1851-52, and with extensions and minor alterations in 1949. Massive ashlar gritstone with moulded plinth, C19 coped gables with moulded kneelers, cross finials and slated roofs laid to diminishing courses. West tower, nave, north and south aisles, south aisle porch, chancel with former chantry chapel, now a lady chapel to the north side, and a sacristy and vestry to the south side.

South aisle mid C15 of two bays with stepped buttresses, one between the windows, the other angled at the east end, with tapering crocketed pinnacles. Two-light windows, remodelled in 1851 with flowing tracery beneath flat heads and hoodmoulds with stops. Moulded string course with crenellated parapet above. Two bay chancel with plain corbel table, and flat-headed, two-light window with ogee head within a moulded surround, now partially obscured by C20 vestry to south wall, which encloses a Decorated doorway to the chancel south wall. Restored three-light east window with flowing tracery beneath a hoodmould with carved stops. East gable has stepped angle buttresses.

Former chantry chapel circa 1459, of two bays with gabled east end, and crenellated parapet above moulded string course to north wall. East window of three lights and two, two-light windows to north wall, all Perpendicular, with cusped lights beneath shallow pointed arched heads with hoodmoulds and stops. Angle buttresses to corners and stepped buttress between north wall windows, with gargoyle above. Doorway with four-centred arched head to west end. North aisle with crenellated parapet above moulded string course and projecting ashlar stack between windows, shouldered at the eaves, and with a circular stone chimney. Blocked doorway at west end with deeply chamfered, pointed arch below hoodmould with stops.

INTERIOR: tall tower arch to nave, with embattled foliated bands as capitals. Roof line of an earlier nave visible above tower arch. Octagonal font of chalice form with heraldic shields of the Eyre, Barnake and Padley families on three facets, and carved decoration to the others.

Four bay nave with octagonal arcade piers and simply moulded arches. North arcade capitals have a form of stiff-leaf decoration, and the responds to the tower wall and chancel walls have a more elaborate form, the latter a restoration. One of the north arcade bases appears to have formerly supported a column of clustered shafts. South arcade capitals are plainly moulded. The chancel arch appears contemporary with the nave arcades. The north chancel chapel, added in 1463 as a chantry chapel to the Eyre family, with a shallow pointed arch giving access from the north aisle. The chapel east wall has tapered corbel supports for statuary, now missing, and an aumbry to the south of the window.

The chancel has a C14 two-light window to the north wall, above an elaborate ogee arched recess having a chest tomb to Robert Eyre of 1459 and his wife, Joan, with brasses reset in a slab of crinoidal limestone, together with brasses to their children. The tomb was restored by the Countess of Newburgh in 1852. The east window has glass by Kempe, originally in Derwent Church, but reset in Hathersage in 1948, following the creation of Derwent reservoir and the submersion of the church. Chancel south wall has an ogee headed piscina and triple sedilia, both late C14, beneath a continuous string course which steps up above the pointed arched doorway now enclosed by the vestry.