A Grade I Listed Building in Corfe Castle, Dorset 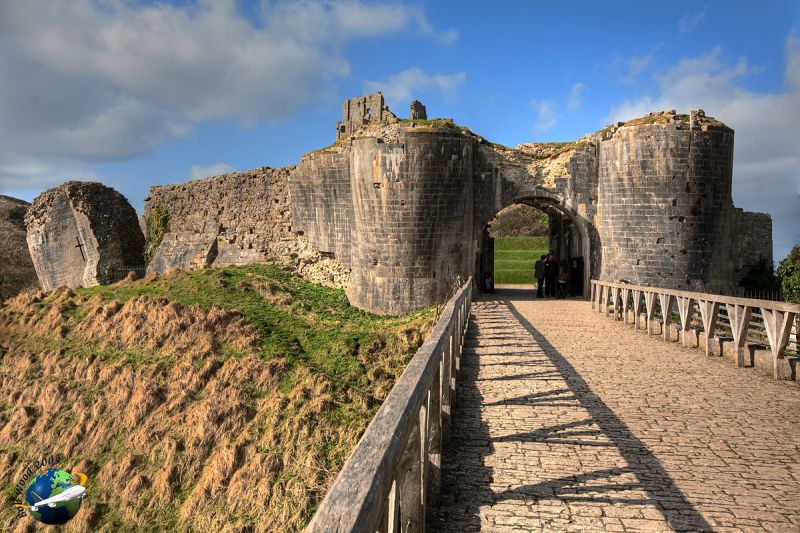 CORFE CASTLE THE SQUARE (North side)
SY 95 82, SY 96 82
7/122
Corfe Castle
20.11.59
GV I
Ruins of former royal castle, built on a natural hilltop in a gap in the main
Purbeck range. Late C11 origin - possibly on an earlier pre-Conquest site,
altered and enlarged in C12, C13 and C14. The Keep refurbished as a house in
mid-C16 and the whole structure slighted and largely demolished after the Civil War.
The fortified enclosure roughly triangular in plan. The curtain walls survive in
part, with the bases of semi-circular towers. Surviving walls part ashlar, part
rough ashlar, part rubble. Outer Gatehouse, at south end, approached by a 4-arch
stone bridge over the now dry moat. Gatehouse consists of a segmental archway
flanked by bases of 2 circular towers, linked to curtain wall. Inner, south-west
Gatehouse, south of the surviving structures, consists of 2 circular towers flanking
a pointed segmental archway. On the left, this has dropped several feet following
undermining after the Civil Wr. At north-west of the site, the remains of the Old
Hall, late C11. Lower walls of this survive, with some herringbone masonry and part
blocked round arched openings. At west end, remains of the Butavant Tower, early C13.
Near the centre, the Keep, C12, square on plan, originally 3-storeyed - an extra
storey inserted in C13. Altered in mid-C16 by Sir Christopher Hatton, - remains
of Tudor windows and fireplaces survive. North of the Keep, large blocks of fallen
masonry. West of the Keep, the Gloriette, a C13 first-floor hall house, with Hall
and Solar over an originally vaulted undercroft. Several lancet windows survive,
with deep roll mouldings. In spite of much destruction, still an impressive
structure, dominating the village. A National Trust property. A Scheduled Ancient
Monument No, 1. (RCHM, Monument 10. Dorset. Vol. II. National Trust Guide.
Corfe Castle 1985).