A Grade I Listed Building in Hope, Derbyshire 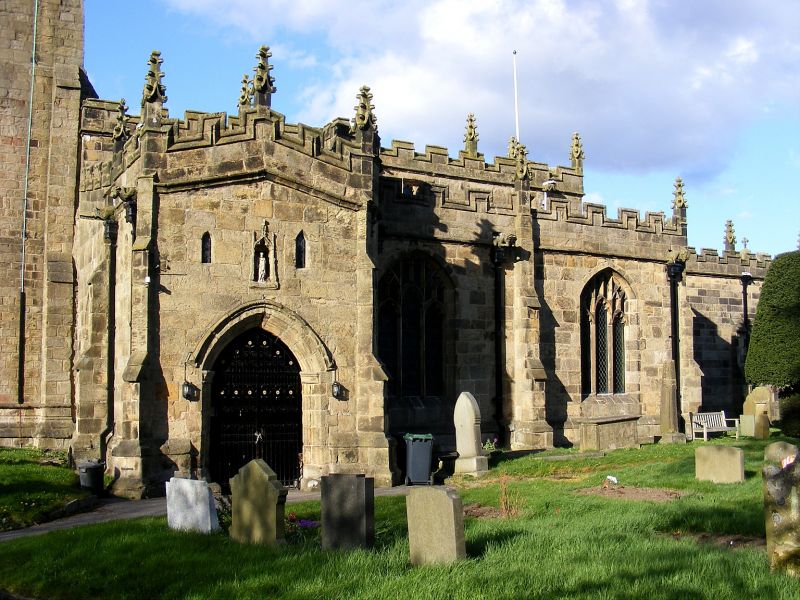 West tower of three unequal stages, divided by chamfers. Angle buttresses to west two stages with set offs. Two-light west window with cusped Y-tracery. Crude two-light bell openings. Squat stone broach spire with entasis, rising from the edges of the tower. The tower is said to have been rebuilt in 1728.

Aisles, clerestory and south porch C15 and of a unified design, all topped with battlements and crocketed pinnacles. Two three-light windows with panel tracery to north and south aisles and similar windows at the east and west ends of the aisles. Also a plain doorway with wave moulding on the north side and a two storey porch on the south side with polygonal stair turret on the south east corner. Porch entrance with two orders of wave mouldings. Cusped ogee vaulted niche above with C19 figure. Many large gargoyles. Clerestory windows of two cusped lights under square heads.

The chancel was rebuilt in 1881-82 with a poor Perpendicular style east window, side windows of two ogee lights under square heads and with battlements and pinnacles. The interior of the porch has stone seats, that on the east side interrupted by a Perpendicular doorway to the stair turret. South door with two orders of wave mouldings. C19 studded oak door on top of an older door.

Four bay nave arcades with polygonal piers, moulded capitals and double chamfered arches. Plain double-chamfered tower arch and former roof line visible above. Piscina and sedilia of c.1300 in the chancel. C14 piscina in the south aisle. At the west end of the north aisle, two C13 foliated cross slabs. Three C17 chairs, two in the chancel and one in the north aisle. C17 altar rails. Pulpit dated 1652. Panelling in chancel and stall backs in nave made up from old box pews inscribed with numerous late C16 and early C17 dates. Panelled C18 dado in aisles inscribed with names and dates. Rare, painted hymn board dated 1806 with painting of David on the back. Two C18 charity boards. Painted board recording work done in 1730. Font with a C12 bowl. Two framed paintings above the south door, dating from 1733 and depicting 'Aaron' and 'life'. Two more above the north door depicting 'Moses' and 'Death'. Marble and alabaster reredos of 1910 containing a vestry behind, an unusual motif copied from Tideswell and Sawley. Chancel screen 1935. Much stained glass including the north aisle east and north east windows of 1919 by F.C Eden and chancel windows by Kempe. South aisle window by Kempe.