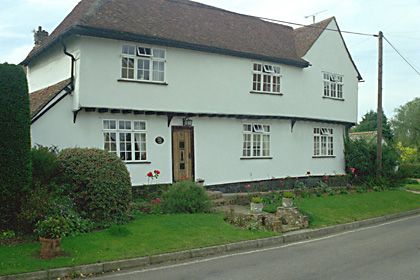 Find accommodation in
Stoke by Clare

TL 74 SW ASHEN THE STREET, West Side
1/11 Street Farmhouse
7.8.1952
GV II*
House, early C16, extended in C17 and C19. Timber framed, plastered, roofed
with handmade red clay tiles. 2-bay ground-floor hall aligned N-S, aspect E,
with original external chimney stack to rear of S bay, and cross-passage and
service bay to S. N crosswing of 2 bays extending to rear, and original stair
tower in angle. C18 external chimney stack to N of crosswing. C17 extension to
rear of service bay, with C19 lean-to extensions to W and N. Lean-to extension
to S of main range, C19. 2 storeys. The E elevation has a continuous jetty on
the main range and crosswing, with exposed beams, joists and 4 plain brackets.
C20 door, 3-window range of C20 casements. Roof hipped at S end of main range
and W end of crosswing. The interior has the original plank-and-muntin screen
on the N side of the cross-passage, a rare feature in Essex, the muntins and one
straight doorhead roll-moulded, blocked twin service doors, the jambs roll-
moulded, the doorheads missing or plastered over, and a Tudor rear doorhead. In
the service bay there is no evidence of an original central partition; about
half the joists are exposed, plain and of horizontal section. In the 'hall'
there are 2 Tudor doorheads (leading to the crosswing and the stair tower), 2
inserted frieze windows in the front wall, blocked, and double-ogee moulded beam
and joists, both with converging stops. The original door to the stair is in
situ, of rebated wedge-shaped planks and ledges. In the crosswing there are
double-ogee moulded joists and beam, the former with carved foliate stops, the
latter with converging stops. The rear extension has in the N side an oriel
window with 4 mullions of refined ovolo section, and joists of vertical section.
There is some exposed close studding on the upper floor. The crosswing is
divided into 2 upper rooms by an original partition. There are blocked windows
in its N wall, and in the rear wall of the stair tower. The wallplate scarfs
are edge-halved and bridled. All the roofs are of clasped purlin construction,
substantially complete with minor additions. This house is transitional in
type, retaining the medieval 3-part plan but built in 2 storeys from the outset,
and retains an exceptional number of original features inside, providing
valuable evidence of this phase of development. RCHM 9.