A Grade I Listed Building in Ashen, Essex 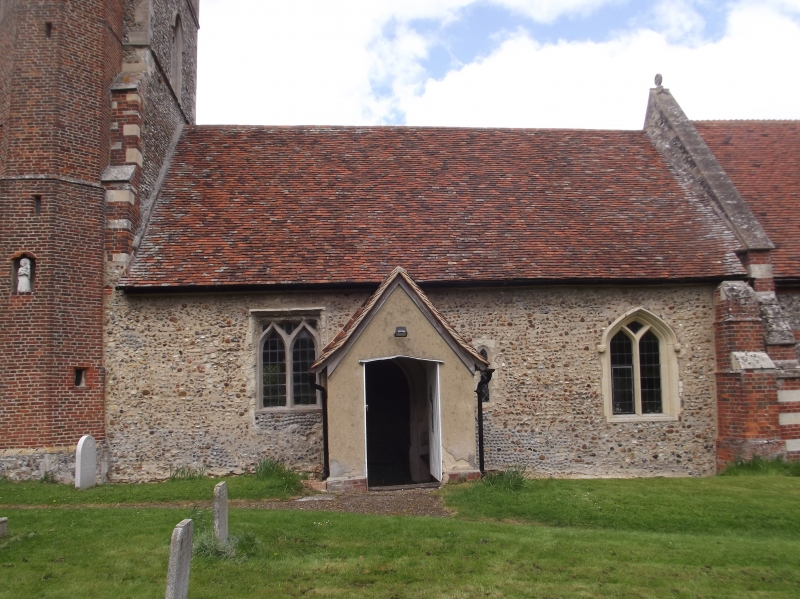 Find accommodation in
Stoke by Clare

Parish church, C13 and later. Walls mainly of flint rubble partly plastered,
with dressings of limestone and clunch, stair turret of red brick in English
bond, S porch timber framed and plastered, Chancel of dressed flint and red
brick, roofs of handmade red clay tiles. The Nave is early C13, the W tower
c.1400 with SE stair turret added in early C16, S porch C16 or earlier, Chancel,
N vestry and N organ chamber 1857. The N wall of the Nave is plastered extern-
ally; it has 2 windows. The eastern is of one C18 rectangular light, inserted
in a C15 aperture from which the mullion and tracery have been removed, with
original moulded label and hollow-moulded segmental-pointed rear-arch. The
western is a C13 lancet widened in the C18, with an external wooden lintel. Both
have C18 glass and leading, the former rectangular, the latter of diamond panes.
Between the windows is the N doorway, early C14, now blocked. It has jambs and
2-centred head of 2 wave-moulded orders. The S wall is of exposed rubble; it
has 3 windows. The easternmost is of c.1500, of 2 plain lights under a 4-
centred head with moulded label and hollow-moulded segmental-pointed rear-arch.
The second is a C13 lancet with chamfered and rebated jambs and head, repaired
externally. The westernmost is late C15, of 2 plain ogee lights under a square
head with moulded label and hollow-moulded segmental rear-arch. Between the 2
western windows is the S doorway of c.1400, with jambs and 2-centred head of 2
moulded orders, with a moulded label. The door is original 'assembled with fox-
wedged pegs that fix V-edged boards to square ledges with chamfered arises'
(Hewett, 1982, 84-5), strap hinges with incomplete foliate ends, C13, and a
large stock-lock. The roof of the Nave is of 4 bays, plastered to the soffit,
with exposed principal rafters, arch-braces to them, wall-pieces and wall-
plates, all moulded, C15. The W tower is of 3 stages with moulded plinth and
strings and crenellated parapet, and a half-octagonal stair-turret of brick
to the SE added in the early C16. The turret extends above the tower and has
a restored parapet supported on trefoiled machicolations. The tower-arch of
c.1400 is 2-centred and of 2-chamfered orders. The responds have each a semi-
octagonal attached shaft with moulded capital and base. The W window is of
c.1400 and of 2 cinquefoiled lights with a quatrefoil in a 2-centred head,
decayed. In the S wall is a doorway to the stair-turret, with chamfered 2-
centred head and jambs. The door is original, with hollow-moulded edge-members
and fillets. In the W wall of the second stage is a window of one cinquefoiled
light and a niche above it with cinquefoiled head, defaced. In each wall of
the bell-chamber there is a C20 restoration window. The S porch is timber
framed, much altered, and plastered externally, C16 or earlier. There are
mortices for missing diamond mullions on each side, and one cranked tiebeam.
The font has a plain octagonal bowl of oolite, C15, and restored stem. There
are three bells, the first and second by Thomas de Lenne, c.1333, the first
inscribed 'Alicia, Ave Maria Gra. Plena Dns. Tecum', the second inscribed
'Thomas, Ihc, Nazaren Rex Judeorum'. The third is by Henry Jordan, late C15,
inscribed 'Sit Nomen Domini Benedictum'. The bell-frame may be original. In
the Nave there is a brass with a man in plate armour with besagues, a woman
with high-waisted gown and horned head-dress, c.1440, and indents for an
inscription plate and 4 shields. On the N wall there is a monument to Luce
(Cotton), wife of John Tallakarne, 1610, painted tablet flanked by terminal
figures with gadrooned cornice, 3 shields of arms and strapwork. On the N wall
of the Nave there is a wooden panel inscribed 'This hath bin the churching the
mearring stool and so it shall be still 1620' reportedly removed from a seat.
At the W end there are 2 late C15 pews and a front, with attached shafts and
some C17 panelling.