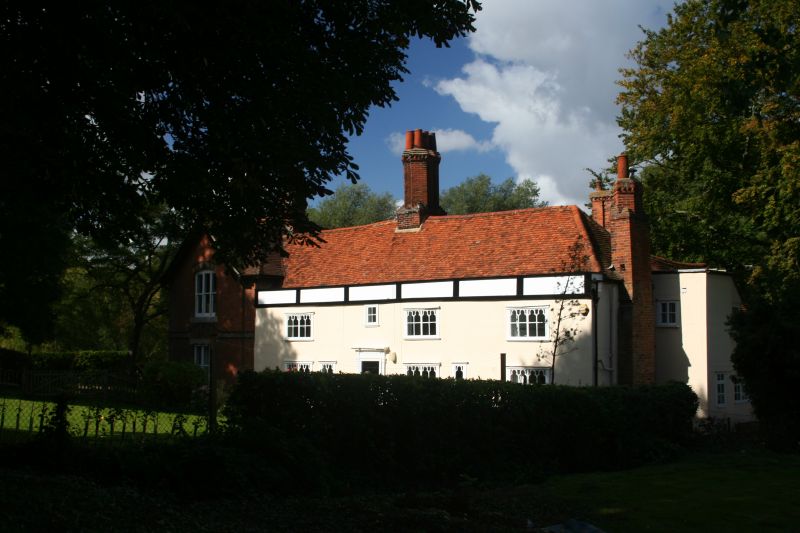 vicarage of lobby entrance form, c.1600 extended in C18 and C19. Timber framed,
roughcast rendered, roofed with handmade red clay tiles. 4 bays aligned
approximately NE-SW, aspect SE, with axial chimney stack in second bay from
SW, forming a lobby entrance. Service wing to NW of NE bay, probably
contemporary. Stair tower to NW of chimney stack, and C18 gabled extension
between it and service wing. External chimney stacks at NW and NE. 2 storey
flat-roofed extension at NE end, C20. Late Cl9 crosswing at SW end with central
chimney stack, extending NE to meet stair tower. 2 storeys. Gothick door under
shallow hood with mixed Gothick and classical ornament, C19. 4 casement
windows, C19, of which 3 have Gothick tracery. On first floor, 4 similar
windows, all with Gothick tracery. Hipped roof, wooden parapet. Late C19
crosswing has one tripartite sash window at each floor, and a band of polychrome
brickwork following the arch of the ground floor window. C19 grouped diagonal
shafts on axial and NE stacks. Interior fully plastered, and beams boxed in.
C18 stair with pine rail and 3 slender turned balusters to each tread, some
missing or damaged. Early C19 cast iron grates in 2 upper rooms, each side of
axial stack. Edge halved and bridled scarf in SE wallplate. Roof of clasped
purlin construction, with curved wind bracing, originally hipped at SW end,
altered to a hip at NE end. Partitions of original "wattle and daub present in
roof. A terrier of 1610 describes the vicarage as 'A Dwelling House having
a Hall, a Parlour and Entry floor'd with Board, also a kitchen, with four other
little rooms, four Chambers, a Study and two pairs of Stairs' (Newcourt, II,
410). The will of Nehemiah Holmes, vicar from 1662 to 1685, bequeathes long
lists of domestic articles in 'the Chamber over the Parlour', 'the
hall chamber', the chamber over the dayry' and 'the old study' (Essex Record
Office D/ABW 71/236). The first 3 can be identified as the upper SW room of
the present house, the next room to the NE and the upper room of the NW service
wing respectively. Mullman wrote in 1771 'The vicarage has been almost entirely
new-built by the present incumbent (p.102), but this must be simply his way
of describing superficial alterations, for structurally the present building
is certainly much older. A photograph dated 1861 in the possession of the vicar
shows the house from the west before the present Victorian wing was added.