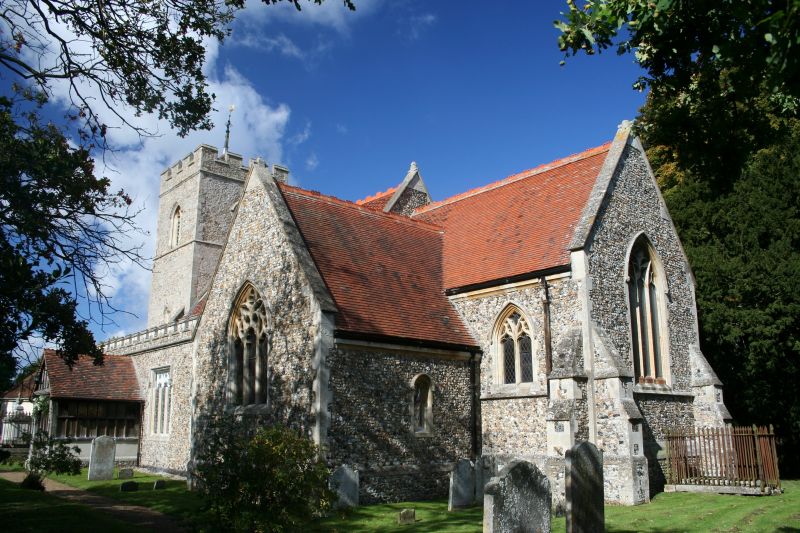 Parish church, early C13. S aisle widened later C14. W tower added C15.
Chancel, N organ chamber, S transept, S porch, N aisle and easternmost bay of
nave and aisles added or rebuilt 1875. Flint rubble with stone dressings, tower
cement-rendered, S porch timber framed, roofs of handmade red clay tiles. The
nave has N and S arcades each of 4 bays; the easternmost is C19, the remainder
have 2-centred arches of the C13, of 2 chamfered orders springing from round
columns with moulded abaci, capitals and bases; the W responds are attached
half-columns, that on the W side partly restored. The S aisle has in the E wall
a C19 archway to the S transept. In the S wall are 3 windows: the easternmost
is C19; the second is late C14, partly restored, of 3 cinquefoiled lights with
tracery under a square head with C19 label; the westernmost is C19 except the
splays and chamfered rear-arch, C14; between the westernmost and middle windows
is the S doorway, later C14, partly restored; it has continuous moulded jambs
and 2-centred arch with a moulded label. There is a piscina with trefoiled head
and quatrefoil drain, late C14. There are 3 C14 grotesque corbels and 2 C19
head corbels. The roofs are all C19. The C15 W tower is of 3 diminishing
stages with a chamfered plinth and C19 parapet. The tower-arch is 2-centred and
of 2 orders, the outer moulded and continuous, the inner chamfered and springing
from semi-octagonal responds with moulded capitals and plain-chamfered bases.
The W window is C19 except the splays and chamfered.2-centred rear-arch.
Across the NW angle is the doorway, with moulded jambs and 2-centred head, to
the stair turret. The second stage has in the S and W walls a narrow pointed
loop with moulded label, partly restored. The bell-chamber has in each wall a
restored window of 2 trefoiled lights under a 2-centred head with moulded label.
The S porch is mainly C19, but retains one cranked tiebeam with deep arched
braces over the door, C15. The font has an octagonal bowl with moulded under-
edge and base, on each face a quatrefoil panel containing flowers, shields, etc;
stem panelled with trefoiled and cinquefoiled heads to the panels. The pulpit is
octagonal with panelled sides, each side with 3 panels, the upper panels
enriched with arabesque strap-ornaments and central boss, C17, partly restored.
There are 6 bells, the fourth dated 1615, the sixth 1640, both by Robert
Oldfield. In the N aisle there is a brass on the N wall to John Ballett, 1638,
with figures of man and wife in civil dress and kneeling figures of 2 sons and 6
daughters with achievement of arms; and on the W wall a white marble tablet to
William Dearling, 1790.