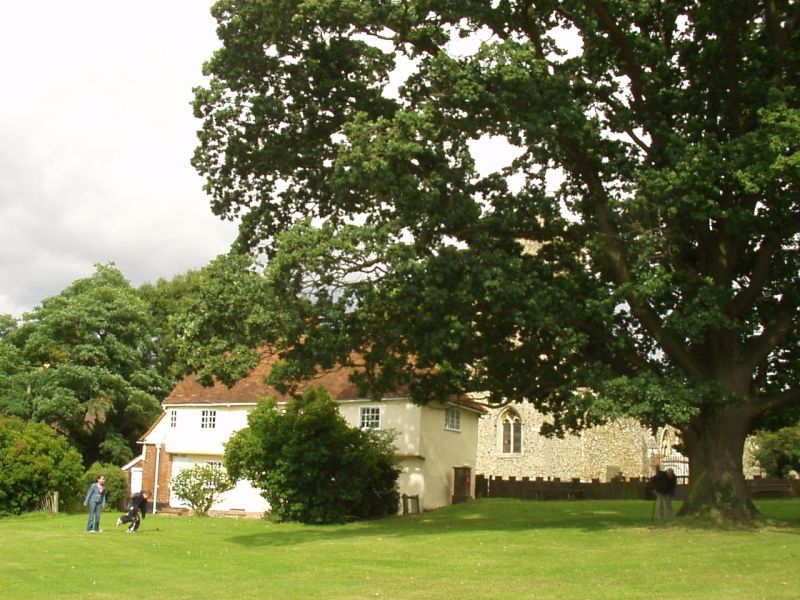 Public hall, C15/16, with later alterations. Timber framed, plastered, roofed
with handmade red clay tiles. 4 equal bays aligned approximately NW-SE, aspect
SW. Inserted chimney stack inside NE wall in second bay from NW end, C19.
Lean-to extensions at NW end, C19 and C20. 2 storeys. SW elevation jettied,
brackets missing. 2 plain boarded doors, 4 windows with horizontally sliding
sashes of 16 lights each, late C19, on each floor, and one C20 casement window
on first floor. NE elevation (towards parish church), ground floor, 2 small C20
casement windows, first floor 4 C19 Gothick cast iron casement windows. Roof
hipped at SE end. Tiled pentice on NW gable. Some framing exposed internally.
On ground floor, at the NW end a stair rises from one external door to the first
floor, C19. At the SE end an original studded partition separates one bay from
the remainder; a later partition divides it into 2 service rooms; the rest is
open. Tranverse and axial beans plain chamfered except in service end (axial
beam missing in second bay from NW), joists lathed and plastered to soffits.
Grooves for sliding shutters. First floor is open from end to end and to
collars. Jowled posts, cambered tiebeams with arched braces. Plain crownposts
with axial braces, much restored. Grooves below wallplates for sliding shutters
on both sides of each bay, but varying in length.. Edge halved and bridled
scarfs in wallplates. This building was built as 2 halls, entirely open on the
first floor, open except for partitioned service room on the.ground floor. It
has been used as a school and as an almshouse, with inserted partitions and
chimneys; most of these have been removed later. In the course of relaying the
ground floor evidence was found of an early inserted chimney stack, C16/17, in
an axial position immediately SE of the middle, later removed. (Information
from Jonathan Howarth, April 1983). This would account for the missing axial
beam in this bay, and alterations to the central crownpost. A notice displayed
at the entrance states that the building was built by William Chimney in 1480,
but the source of this information has not been traced. Morant wrote in 1768:
'A house, close to the church yard, said to be built by one - Chimney, was
designed for the entertainment of poor people on their wedding day. It seems to
be very ancient, but ruinous', without supplying a Christian name or date (II,
499). The design is plain, consistent with construction in the late C15 or
early C16. The fact that the jetty faces away from the church tends to confirm
this secular intention, for buildings of similar form designed as the meeting
places of religious guilds are usually jettied towards the church. A guild is
recorded at Matching (Calendar of Letters Patent, 12 Elizabeth 268). In the
tithe award of 1843 this building was described as 2 tenements with gardens,
belonging to the parish of Matching, both unoccupied (Essex Record Office D/CT
236).