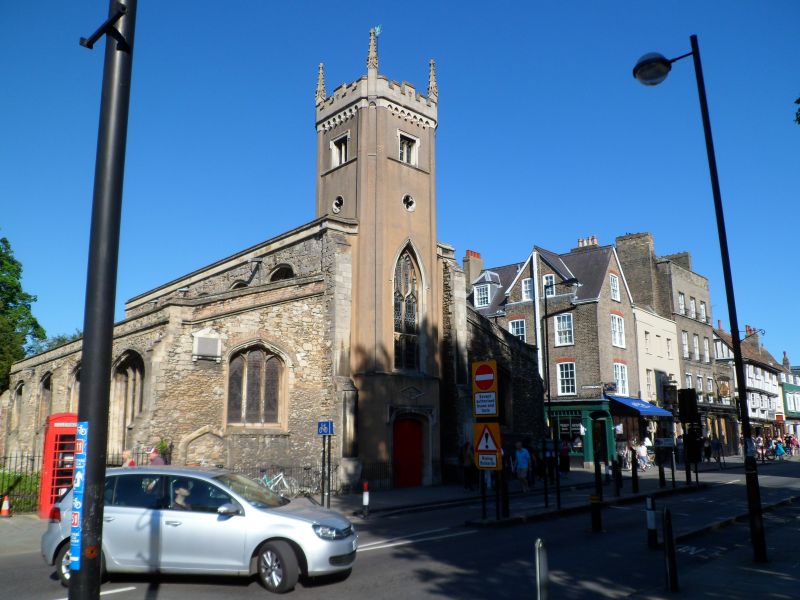 GV II*
DATES/ARCHITECTS:
There was probably already a church here by the early C13, when the building was largely rebuilt, including both arcades and the chancel arch. In particular, the wide eastern bays suggest the presence of earlier transepts. These bays were rebuilt in the early C14, and at some point the rest of the arcades were raised and the arches reset, perhaps in the early C16 when the first pier on each side was rebuilt, the clerestory added and the aisles widened. A date of 1538 in the N aisle roof may provide a date for the work. A C15 N chancel chapel accessed through the now blocked arch in the E end of the N aisle was demolished at some point in the post Reformation period, probably when the chancel was rebuilt in 1726. The W wall was taken down and the W tower built inside the nave in 1821 to the designs of Charles Humphrey. The church was restored in 1843 and 1863, and the N vestry was built in 1866. A spire on the tower was removed in 1928.

MATERIALS:
Brick chancel; nave and aisles are rubble with some brick and stone dressings; the tower is cement rendered. Roofs are tile, slate and lead.

PLAN:
Chancel with N vestry; nave with N and S aisles and W tower within the western bay of the nave.

EXTERIOR
The exterior is dominated by the early C19 tower in a thin, Commissioner's gothic style. The nave and aisles are externally entirely early C16, and the brick chancel is distinctively C18. There is a distinctive mix of building materials and blocked openings in the pre-C19 work.

Above the nave roof, the tower is square with chamfered corners and has an embattled parapet with pinnacles. The tall W window has elongated Perpendicular style tracery, and the W door has a broad Tudor arched opening, above which is a punning plaque 'Deum Cole' commemorating the benefaction of Rev. William Cole. The tower replaced a C15 W window and a timber belfry in the churchyard.

In typical Commissioner's style, the W wall of the tower is almost flush with W ends of the aisles, both of which have early C16 3-light windows. There are similar windows in the aisle walls and in the nave clerestory. Both nave and aisles have plain parapets. The S aisle E window is blocked and shows the remains of both an early C16 window and of a smaller, early C19 that replaced it before the whole was blocked in the later C19. There is a blocked C16 door in the W end of the N aisle. The S door is C13. It was reset in the C16 and given a C16 door, and restored by Ambrose Poynter in 1843. A buttress set against the E wall of the S aisle is probably the remains of a transept demolished when the aisle was rebuilt. A C15 buttress at the NW corner of the vestry is presumably the remains of the former N chapel.

The brick chancel, which has no E window, was added in the early C18. There is no E window. The N and S chancel windows have stone dressings and are of two rounded lights in a square frame in a Gothic Survival style. Some of the bricks in the NE angle have carved initials, possibly of the C18 bricklayers.

INTERIOR
The interior is high, with tall arcades and a large clerestory, but very dark towards the E as there are no E windows in the chancel or the aisles. The W end is dominated by the W tower, which projects into the nave and has an internal W gallery.

The C13 chancel arch was repaired in the C18 when the chancel was rebuilt, and has a chamfered inner order with C18 capitals. The N and S chancel windows were refashioned in the C19 to appear as narrow lancets internally.

The five bay N and S nave arcades are tall, and multi phase. The four western bays are C13 in origin and have arches of two chamfered orders on polygonal piers with moulded capitals and bases. The east bays were built in the early C14 and probably replace older transept arches. The first pier on each side was rebuilt in the early C16, and which time the both arcades were raised reusing the existing arches.

The N aisle roof has carved and inscribed wall plates dated 1538 reset on the S side. The flat, plastered nave roof is probably early C19, and the boarded chancel ceiling has C19 painted decoration.

PRINCIPAL FIXTURES
The church was refurnished in the C19, and the most notable feature of the work is the decoration of the chancel. There is a large painting of Christ in majesty surrounded by saints and angels on the chancel E wall, and the chancel ceiling stenciled decoration. There is also a C19 timber pulpit with blind tracery panels, a delicate late C19 or early C20 iron screen closing the sanctuary, and an early C20 timber screen in a classical style closing off part of the S aisle. The octagonal font is C15, and has carved heads on the underside of the bowl. There is a partial medieval piscina in the N aisle E wall.
There are a number of good monuments in the church, including brasses for Alan Hoberd, d.1432 and Phoebe Withnoll, d. 1658, and several good C18 and early C19 wall tablets including one for the well-known Cambridgeshire antiquary Rev. William Cole, d. 1782, who left money for rebuilding the tower.

SUBSIDIARY FEATURES
A number of good C17 and C18 monuments in the churchyard are described in the RCHME volume, including several C17 slabs and some C18 table tombs.

HISTORY
The dedication of the church to St Clement may suggest a pre-Conquest, Danish origin. It also has seafaring associations, which is appropriate for the church¿s location near the quay area. The earliest fabric is late C12, and the church was only mentioned in documentary sources in the early C13. About 1218 it was given to St Radegund's nunnery, and revenues from St Clement's were used to provide clothing for the nuns. There were at least two guilds and two chantries in the church in the middle ages. The rebuilding in the 1530s, datable by the roof beam of 1538, was carried out right on the eve of the Reformation, even as many religious changes were beginning to happen. St Clement's passed to Jesus College at the Reformation with the rest of St Radegund's property. It was apparently in poor repair in the C17, and the chancel was rebuilt in 1726. In 1742, the antiquary Rev. William Cole of Milton described it as 'the lightest and most airy church and in the best repair that I ever saw for an old one'. The W tower was built in 1821 using a bequest from Cole, who is commemorated by the punning inscription 'Deum Cole' (from 'Deum cole, regem serva': worship God, serve the king) on a plaque on the tower. The church was extensively restored in the C19, and from the late C20 has shared its space with a Greek orthodox congregation.

REASONS FOR DESIGNATION
The Church of St Clement, Cambridge is designated at Grade II* for the following principal reasons:
* Parish church with excellent surviving fabric of the C13-C16, including a dated roof beam of 1538.
* C15 font.
* C18 brick chancel and early C19 W tower.
* Exterior is a distinctive mix of styles and materials, with archaeological evidence of former features.
* Good scheme of C19 painted decoration in the chancel.