A Grade I Listed Building in Soham, Ely, Cambridgeshire 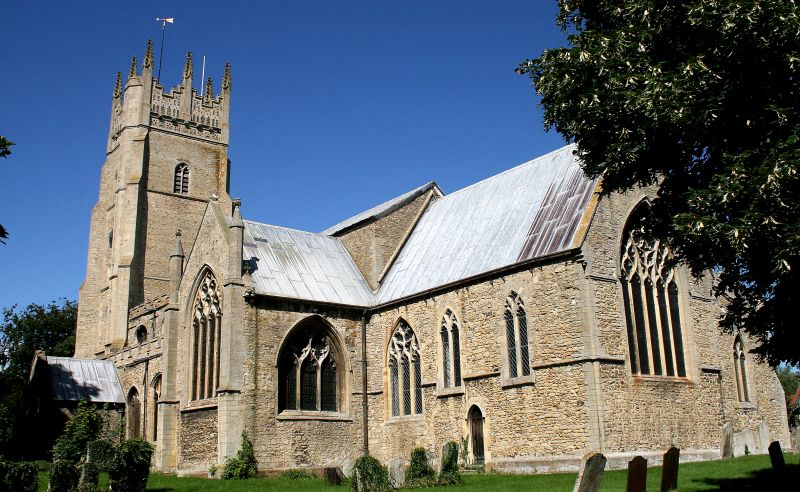 Minster Church, c.1180-90 of cruciform plan. In C15 the church
was extended by one bay to the west and the west tower built.
The late C12 nave arcade and crossing are particularly fine, as
are the C15 roof, pews, misericords and screen. The church is
constructed of rubble and pebblestone with flint and clunch.
The interior stonework is of clunch. Restoration has been
carried out in Ketton, particularly to door and window
openings. West tower early C15, of four stages on double
splayed plinth with band of blind quatrefoil flushwork and
surmounted by a stepped and embattled parapet with crocketed
finials at corners and to centre, a frieze of flushwork, and a
cornice with mask and other ornament. Four-stage diagonal
buttressing except for south-east corner which has a newel
staircase. West doorway in two-centred arch of two wave moulded
orders in a square head with quatrefoils to spandrels. West
window of four cinquefoil lights with vertical tracery in two-
centred arch. The roof to the original late C12 nave was raised
when the clerestorey was added but at the east end part of the
original roof is visible. Each side of clerestorey has a string
course with rosettes above five windows of three cinquefoil
lights, each in four-centred heads. The south aisle and porch
are C14 but the window and door openings are much restored. The
south transept is late C14 with a rebuilt C15 gable end wall of
Barnack stone with octagonal pinnacles at the corners surmounted
by grotesques. A plinth and string-course are continued from
the south transept to the chancel. There is a restored four-
light window. The south side of the chancel has one C14 window
of two cinquefoil lights with a foiled head in two-centred arch
and two other restored windows. The jamb of a C12 south doorway
with a round-headed arch is visible. Large C14 east window, of
five cinquefoil lights with flowing tracery, restored. The
north aisle and transept are similar to the south except for a
north vestry, C14 with two original windows and a C15 north
chapel between the north aisle and north vestry. The north
porch is C15 and in two bays. Embattled parapet with chequer-
board pattern frieze of clunch and flint flushwork with
crocketed pinnacles at corners. The plinth is splayed and in
two stages and has a similar frieze of flushwork. Small niche
above two-centred archway with hollow and roll moulding. The
inner archway is C14, two-centred with hollow and roll moulding
and with a string-course carried over the archway as a label.
Interior. Except for the early C15 west tower and west bay of
the nave arcade, nearly the whole church is c.1180-90. The
original nave arcade is in four bays. Two-centred arches of two
unmoulded orders on alternating round and octagonal columns with
scallop capitals. Fine C15 roof. Tie beams on jackposts with
moulded braces and with angels and other figures carved to the
soffits of the intermediate principal rafters. The arches at
the crossing are similar to those at the nave arcade, and are
carried on half-round responds to the piers, with the capitals
carved with foliate ornament. The crossing arch has bands of
dogtooth, merlon and other ornament of 1180-90. There is a C15
archway between the chancel and the north chapel, and a C13
lancet window, now blocked between the north vestry and
chancel. In the chancel there are traces of C14 wall painting
on the north, probably of a saint, and on either side of the
east window two niches with figures. In the south wall there is
a triple sedilia, C14, with cusped ogee arches in square heads
with tracery to spandrels flanked by crocketed pinnacles. The
piscina is in similar style. In the south transept, a double
piscina, C14, of clunch with hollow and roll moulding to two,
two-centred arches. In the north transept a fine C14 tomb
recess with cusping to an ogee arch with running foliate
ornament, flanked by crocketed pinnacles, and a piscina to the
right hand with trefoil cusping to two-centred arch. Wall
monument, north chapel, Edward Bernes, Esquire and Dorothy, his
wife, 1598. The screen between north transept and north chapel
is C15 and in three bays. Cusping to ogee heads and with
vertical tracery, part restored. The door between north vestry
and chancel is C15. The planks have cover strips and the door
still retains the original ironwork. In the nave, many of the
pew ends have fine original carving of C15, and the misericords,
now at the west end of the nave, are also C15.
Pevsner: Buildings of England (Cambs), p.457.
Olorenshaw, J.R: Notes on the Church of St. Andrew (1905).