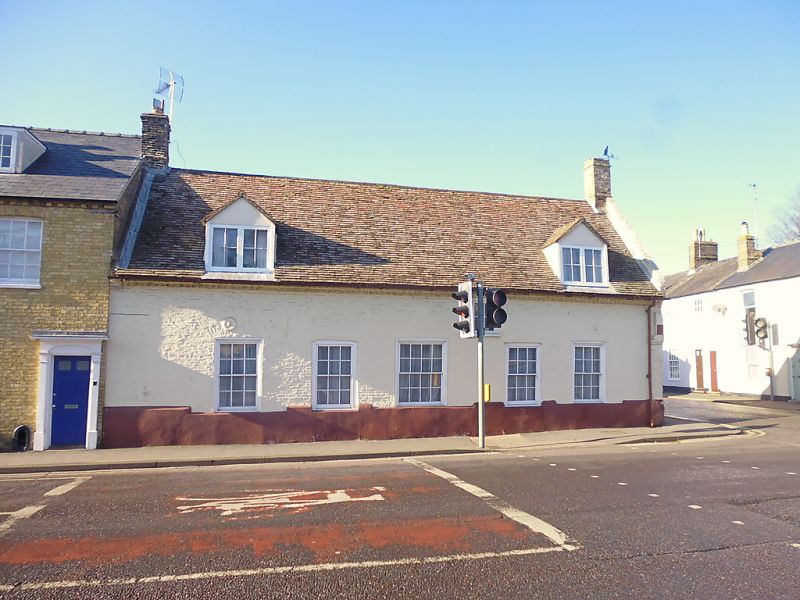 A former timber-framed house of probable C17 date, altered and subdivided into two cottages in the late-C18/early-C19, with later-C19 alterations as a public house. It was converted into a single dwelling in the late C20.

A former timber-framed house of probable C17 date, altered and subdivided into two cottages in the late-C18/early-C19, with later-C19 alterations as a public house. It was converted into a single dwelling in the late C20.

MATERIALS: of painted brick and stone with brick gable end stacks and a roof of clay tiles.

PLAN: it is aligned north to south with a rectangular plan.

EXTERIOR: the building stands at the corner of Lynn Road and Egremont Street and is of one-and-a-half storeys. Its principal elevation to Lynn Road is of late-C18/early-C19 brick with a double cogged eaves between corbelled brackets, a deep plinth and five six-over-six sashes in flush cased frames. The central window is wider and is possibly set within a former C17 doorway while the two flanking windows are set within former segmental-headed doorways of late-C18/early-C19 date. To the attic there are two gabled dormers with two-light casements with square-paned glazing.

The north gable end to Egremont Street is comprised of uncoursed stone rubble to the lower section with brick above. A date stone in the apex of the gable is inscribed 'DB / 1987' and records the partial rebuilding of the gable in the late C20. Adjoining the right-hand side is the northern end of an outshut addition which was built against the west side in the later C19. It has a vertical-rectangular casement with square-paned glazing and a plank and batten door, both late C20.

The west face of the C19 addition has a central doorway containing a late-C20 panelled door. It is flanked on its right-hand side by two, small, square casement windows and on its left by two rectangular casements, one vertically aligned and one horizontally aligned. All have square-paned glazing. The attic has a gabled dormer at the centre with a uPVC three-light mullion window. All the windows are late-C20 replacements.

INTERIOR: the ground floor of the C17 range, which was originally of three bays, comprises an off-centre staircase passage with a large room on the south side and a smaller room on the north. It is believed that the north-side room and staircase passage occupy the original northern bay while the larger southern room occupies the former central and southern bays of the C17 building. A spine beam, comprised of at least three large pieces of timber, runs through the centre of the ground floor in a north-south alignment. It is transversed by three centrally placed cross beams of which the central and northern beams, which are unchamfered and roughly finished, are partly concealed by the later partition walling which forms the staircase passage. Both of these beams are supported by late-C20 salvaged timber posts. The spine beam in the southern room is comprised of at least two pieces of timber. In the northern part of the room (the former central bay), the spine beam is roughly chamfered and is unstopped where its south end meets the southernmost cross beam. The southern spine beam, which runs from the southern cross beam to a bracket set within the late-C18/early-C19 chimney stack in the south gable wall, is also roughly chamfered with no stops at either end. Both spine beams have joists extending east and west of them. These are irregularly spaced and sized, and roughly finished. In the central bay there is a further beam running parallel with the spine beam in the centre of the east side. Also roughly finished with no evidence of a chamfer, its exact function is unknown. A series of residual lap joints on the south side of the southernmost cross beam probably indicate the position of a former partition. Built against the south gable wall is a late-C18/early-C19 fireplace and chimney stack. It has a large opening formed of brick with a timber bressumer with residual mortises on its the outer face indicating that it is a piece of salvaged timber. Within the fireplace, on the rear wall, there are two niches, while the north side contains a bread oven. To the left-hand side of the fireplace is a cupboard with a plank and batten door. A shallow scoop in the outer wall of the building indicates that this was possibly the position of a former staircase.

In the northern room the spine beam is largely boxed in and is supported on a boxed in post sitting against the north gable wall. At the northernmost end a section of the boxing has been removed to reveal a chamfered beam with run out stops. On the east side of the beam there are residual mortises for the former ceiling joists; two joists from this ceiling bay still survive in the staircase passage. To the west wall there is a former C19 serving hatch, now blocked up, while the former fireplace which stood against the north gable wall was removed in the late C20. The C19 outshut on the west side, added when the building was converted into a public house, comprises a late-C20 kitchen (the former servery) on the north side and a late-C20 bathroom (the former toilets) on the south. Both these rooms, along with the attic storey, which was largely reconfigured in the late C20, retain no historic fixtures and fittings of interest. The roof structure, which is concealed by late-C20 plasterboard, is a late-C20 replacement, and is therefore of considerably less interest.

The present city of Ely rises 20m above the surrounding fen on an island of Kimmeridge clay. Although well connected by river and waterways, until the C17 only causeways connected the island to the mainland, and in the early years of Christianity its isolation made it an ideal refuge for those seeking a secluded monastic life. The first successful attempt to establish a religious settlement here was made by Etheldreda in c.673, re-endowed by King Edgar 100 years after its destruction by the Danes in 870. Despite threats of further invasion in the C11, and later political turmoil, this monastery survived until its dissolution in 1539. The presence of a monastic community occupying substantial buildings required the support of a lay community, and as that grew, so did the needs of the lay-people for accommodation and services. A detailed survey of 1416 recorded 457 buildings and described an established street pattern; by 1563 the number of households had grown to 800. Despite this growth in population, John Speed’s map of Ely, published in 1611/12, is very similar in both layout and extent to that of the first edition Ordnance Survey (OS) Map of 1885, where the only significant expansion is towards the railway (1845): however, in Speed’s map, houses lining the streets enclose spaces of apparently horticultural and even agricultural production, and while these are still present on the 1885 map they have been pushed to the margins of the city. These maps graphically illustrate the continuing importance of agriculture and agriculturally related industries in the early C17 and beyond, and also show that the later growth in population took place mainly within the confines of the early city street plan. Before the later C19, the only significant rival to agriculture was the pottery industry, in production from the C12 to 1860.

Following the dissolution of the monastery, Ely remained the centre of the diocese, but the loss of the community, and of pilgrims to the shrine of St Etheldreda, would have had a considerable impact on the city’s economy. The consequent decline in management of the fen and its waterways led to an increase in flooding, and attempts at drainage in the C17 and C18 seem to have had limited effect, creating constraints on the ability of the city to thrive. Successive literary travellers commented on the poor drainage, including Celia Fiennes in the mid-C17, who described the city as a “perfect quagmire”, and Daniel Defoe in the early C18, who noted both the city’s market gardens and its overflowing wells. By the mid-C19 the city was in a state of recovery and regeneration: several possible contributory factors include successful drainage, enclosure (1848) and the arrival of the railway with the opening of the Cambridge to Ely line in 1845. This was followed slightly later by other lines, making the city a transport hub. Despite this, the physical expansion of Ely beyond its medieval core was slow through the mid-C20, accelerating through the late C20 and into the C21, as Ely developed as a dormitory town for Cambridge.

The precise origins of the house known as The Old King William IV are uncertain, but given the surviving structural fabric, along with the historical development of Lynn Road and Egremont Street (formerly known as Acreman's Street), it appears to have originated as a three-bay, timber-framed house in the C17, probably on the site of a late-medieval tenement. In the late-C18/early-C19 it was substantially remodelled and subdivided into two cottages. Later in the C19 it was converted into the Old King William IV public house, with an outshut addition accommodating a servery and toilets added to the west side. The building was remodelled to form a single dwelling in the late C20, with the work including a new roof structure and the rebuilding of the north gable wall.

Old King William IV House, a former timber-framed house of C17 date, altered and subdivided into two cottages in the late-C18/early-C19, with later-C19 alterations as a public house, now a single dwelling, is listed at Grade II for the following principal reasons:
* Architectural interest: it has evolved over four centuries, reflecting the changing needs of succeeding occupants and retaining significant historic fabric and structural detail from each phase, thus providing important evidence for historic building traditions; * Group value: it forms part of a group of C17/C18 urban vernacular buildings with Nos.21 to 27 Lynn Road (listed Grade II).