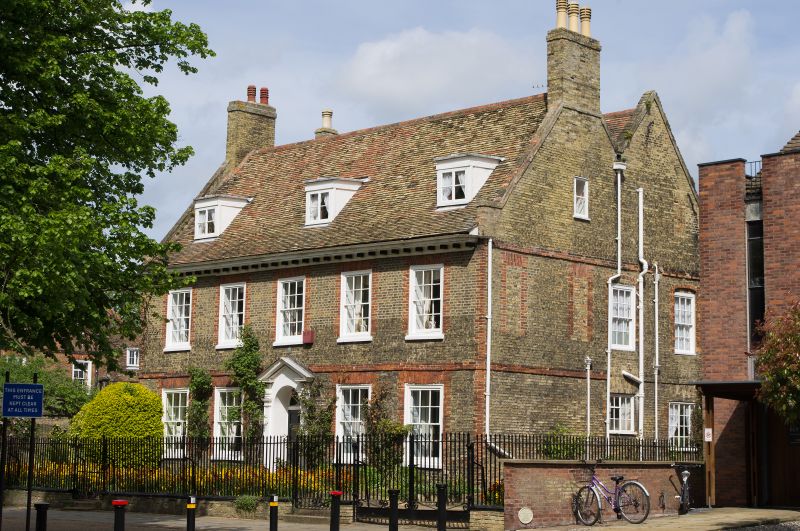 EXTERIOR: the building has a double-pile plan, and is of two and a half storeys with a basement to the rear range. The south range has internal stacks, and a chimney above both gables. The main, south elevation is symmetrical, of five bays, with twelve-paned unhorned sash windows, almost flush with the surrounding brickwork, under gauged red brick flat arches; there are also three dormer windows in the roof. The centrally placed front door has a wooden surround with square pilasters and an open pediment with modillion detail. The door has six fielded panels. A string course runs between storeys in all four elevations; this is red brick to the south and gable ends, and gault brick to the north. Underneath the projecting eaves to the south is a modillion cornice. The windows to both gable ends have red brick surrounds and gauged red brick flat arches. Several have been blocked, generally with gault brick, while others appear to be later insertions. The west gable end and north elevation windows are mainly two or four-paned sashes; those to the east gable end are both twelve and two-paned, with casements to the ground floor, with relieving arches over. There are also three dormer windows in the roof of the north elevation, and 1930s aluminium framed French doors towards the west end of the ground floor.

INTERIOR: the ground floor has a wide entrance hall, flanked by reception rooms. To the north-east of the hall is an open-well staircase with closed string stair, twisted balusters and square newel-posts, and with fielded panelling to the wall. Underneath the stair is a small cupboard with two-panel door and late C17 H-shaped hinges. There are four rooms to the ground floor, one to either side of the entrance hall within the south range, and a further two, the kitchen and dining room, within the north range. All partition walls are said to be lathe and plaster, and most doors are two-panelled, some with brass door furniture.

The drawing room, to the west of the hall, has full-height panelling, with a dado rail with large, bolection moulded, panels below and above. The fireplace, which appears to be a later addition, possibly C19, has a flat marble surround and narrow moulding on its inner edge. The timber architrave and the cornice supporting the mantel shelf are decorated with a foliate design. To the east of the hall is the study: this has panelling to dado height and to the sides of the window recess, and also a moulded cornice and moulded ceiling beam. A hatch in the north wall may once have allowed a direct link with the kitchen, suggesting a former use as a dining room. Direct access is now interrupted by a corridor from the hall, between the study and kitchen. The door to the kitchen opens from this corridor: this is of plank and batten construction with strap hinges. Immediately next to this, to the north of the hall, is a blocked doorway, formerly to the cellar, now accessed from the kitchen through a two-panelled door. A third, plank and batten, door, immediately to the north of the cellar door, opens onto a service stair, which can be seen rising through the cellar. Just below the point where it crosses the cellar, unpierced splat balusters have been recycled to form a ventilated partition over an internal cellar door.

The kitchen is modern, but contains a chamfered ceiling beam with scroll stops. The cellar also has a chamfered beam. The service stair separates the kitchen and dining room, which are directly connected by a narrow corridor to the north of the stair: this has panelled sliding doors to cupboards on one side. The dining room also has two doors to the south, one to the hall and one to the drawing room.

The first floor contains four rooms, one of which has been subdivided to create bathrooms. Surviving features include moulded cornices, beams and two-panelled doors. Of the three surviving fireplaces, one is modern and one C19, but the third has an C18 cast iron basket grate. The modern stair to the attics rises to into the roof of the north range, a continuous space, within which the roof structure is partially exposed. Visible elements include staggered purlins, rafters and collars. The north range attic opens onto ceiled rooms within the south roof space; these are subdivided by stud walls and have both six and two-panelled doors.

SUBSIDIARY FEATURE: to the north of the house, and to the east of the garden, is the former stable block, a rectangular building, of gault brick, with slate roofs. This is not of special architectural interest, and is excluded from the listing.

The present city of Ely rises 20m above the surrounding fen on an island of Kimmeridge clay. Although well connected by river and waterways, until the C17 only causeways connected the island to the mainland, and in the early years of Christianity its isolation made it an ideal refuge for those seeking a secluded monastic life. The first successful attempt to establish a religious settlement here was made by Etheldreda in c.673, re-endowed by King Edgar 100 years after its destruction by the Danes in 870. Despite threats of further invasion in the C11, and later political turmoil, this monastery survived until its dissolution in 1539. The presence of a monastic community occupying substantial buildings required the support of a lay community, and as that grew, so did the needs of the lay-people for accommodation and services. A detailed survey of 1416 recorded 457 buildings and described an established street pattern; by 1563 the number of households had grown to 800. Despite this growth in population, John Speed’s map of Ely, published in 1611/12, is very similar in both layout and extent to that of the first edition Ordnance Survey (OS) Map of 1885, where the only significant expansion is towards the railway (1845): however, in Speed’s map, houses lining the streets enclose spaces of apparently horticultural and even agricultural production, and while these are still present on the 1885 map they have been pushed to the margins of the city. These maps graphically illustrate the continuing importance of agriculture and agriculturally related industries in the early C17 and beyond, and also show that the later growth in population took place mainly within the confines of the early city street plan. Before the later C19, the only significant rival to agriculture was the pottery industry, in production from the C12 to 1860.

Following the dissolution of the monastery, Ely remained the centre of the diocese, but the loss of the community, and of pilgrims to the shrine of St Etheldreda, would have had a considerable impact on the city’s economy. The consequent decline in management of the fen and its waterways led to an increase in flooding, and attempts at drainage in the C17 and C18 seem to have had limited effect, creating constraints on the ability of the city to thrive. Successive literary travellers commented on the poor drainage, including Celia Fiennes in the mid-C17, who described the city as a “perfect quagmire”, and Daniel Defoe in the early C18, who noted both the city’s market gardens and its overflowing wells. By the mid-C19 the city was in a state of recovery and regeneration: several possible contributory factors include successful drainage, enclosure (1848) and the arrival of the railway with the opening of the Cambridge to Ely line in 1845. This was followed slightly later by other lines, making the city a transport hub. Despite this, the physical expansion of Ely beyond its medieval core was slow through the mid-C20, accelerating through the late C20 and into the C21, as Ely developed as a dormitory town for Cambridge.

3 Palace Green lies to the north-west of the west end of Ely Cathedral. It occupies the south-west quadrant of a rectangle of land enclosed by streets and lanes, which Speed’s map of 1611 depicts with houses bordering both the lane to the west and St Mary’s Street to the north. In 1658 Thomas Parsons’ Charity (founded in 1497) purchased a house on the site of, or close to the present house, from Robert Claxton, the singing master at the Cathedral School, for £101 and 8 shillings. This may have been one of those shown on Speed's map, in which case the construction of the present house, which appears to date to c1700, would have followed their demolition. Deeds for the present house survive from 1705 onwards, the earliest recording its sale by Thomas Parsons’ Charity for 60 guineas, but no transactions are recorded prior to that date. A full record of subsequent sales transactions survives. The property formerly included land to the north, but this is said to have been sold in 1914.

The house appears to have undergone several phases of minor modernisation or renovation in the course of its life, the most substantial of which was the addition of a small single storey wing to the north, shown on Ordnance Survey maps from the first edition (1888) onwards; the ghost of its pitched roof can be seen in the north elevation. It was replaced in the later C20 by the present lean-to structure. Less immediately evident internal changes include the apparent reorientation of the enclosed service staircase, with its entrance moved from the end of the hall to the kitchen.

3 Palace Green, a late C17 to early C18 house, is listed at Grade II* for the following principal reasons:
* Historic interest: it has a remarkably complete historical record, beginning with John Speed’s map of 1611. This depicts the immediate precursor to the present house, while its subsequent history is fully recorded in sales transactions held by Thomas Parsons’ Charity. The survival of interior detail and plan form also records the social history of the house, and the varying social standing of members of the household;
* Architectural interest: it is of more than special architectural interest for its well balanced and carefully detailed south elevation, as well as interior detail of high quality, in particular the full height moulded panelling to the south-west living room and the dado panelling to the study, staircase and landing. The plan form to the ground floor and attics is also of significance for its demarcation of social space;
* Degree of survival: alterations and additions are few and minor compared to the extensive survival of historic fabric and detail;
* Group value: it lies within the Ely conservation area, is one of 198 listed buildings in the city, and forms part of a collection illustrating building traditions spanning several centuries. Its prominent position at the heart of the city means that it is close to, and has group value with, Ely’s most significant buildings, the cathedral and Bishop’s Palace, both listed at Grade I. It also has close group value with its surrounding wall and railings to the west and south, separately listed at Grade II, and with the almost contemporary Chantry House, its neighbour to the west, listed at Grade II*.