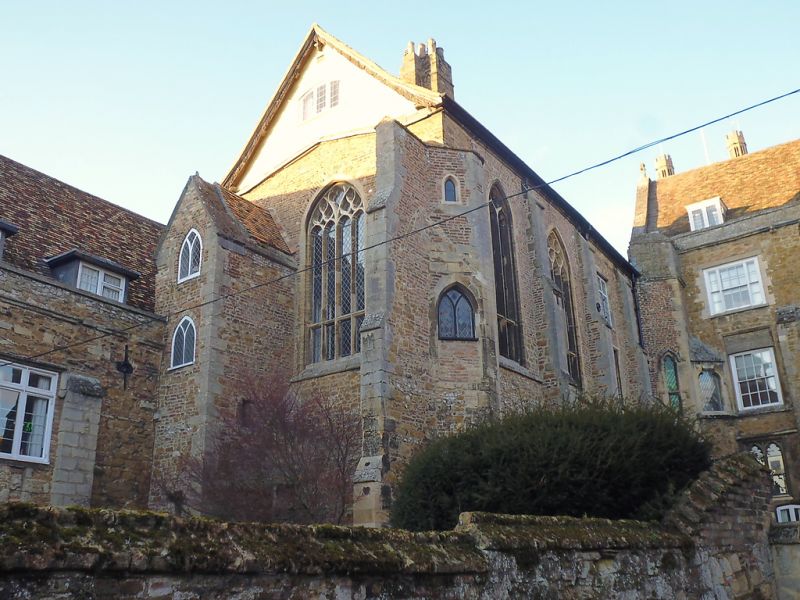 THE COLLEGE
1.
1082
The Queen's Hall
TL 5479 2/92 (Headmaster's House)
23.9.50.
GV
2.
The Queen's Hall was built by Prior Crauden circa 1330. It is said to have
been built for entertaining Queen Philippa, wife of Edward III. It is now
the Headmaster's House of the King's School. The original vaulted undercroft
remains with ribbed vaulting springing from plain columns without capitals.
There are C14 pointed arched windows with curvilinear tracery on the south
and east fronts. It is built of Carr stone rubble with Barnack, or similar,
stone dressings and much brick patching. The hall of 4 bays, which has
been sub-divided to form a dwelling house, is buttressed on the east front
and has small corner wings (or towers) on the south end. The present steeply
pitched tiled roof replaces an earlier flat leaded roof. The line of the
original roof can still be seen on the south gable. Although much altered,
the interior retains Cl4 features including corbels carved in the shape
of crouching figures (similar to those in the Great Hall) which took the
roof principals, also a C14 corbelled chimney stack on the west side, with
ogee arches springing from carved heads. (Originally an external feature,
now enclosed by later buildings).

The Great Hall (Bishop's residence), the Queen's Hall (Headmaster's House),
wall to the garden of the Bishop's residence, Guest Quarters of the Monastery,
Walls to the Guest Quarters of the Monastery and Ely Porta, Prior's house
(Boarding House of the King's School) Prior Crauden's Chapel, Walls to the
garden of the Prior's House, Ely Porta, Barn and Storehouse of the Monastery
and Wall to the Barn and Storehouse form a group with Bishop's Palace, Walls
to the Bishop's Palace, and Nos 2 to 8 (consec) and No 9 (stables to Bishop's
Palace), The Gallery.
See also general group description under the Cathedral of the Holy Trinity.